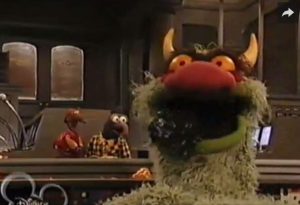 Typically, a clip show is done to celebrate viewers’ favorite moments for a show that has had a long, successful run, which makes this episode’s appearance seem a little odd. Has a show that’s only been around for two seasons really earned the right to do a clip show? Given that this was the last episode of Muppets Tonight to be produced, I’m willing to guess this was done out of necessity, rather than by choice. Ultimately, after the show was relegated to the Disney Channel, Muppets Tonight seemingly didn’t get the same exposure it did during its run on ABC, and as the Jim Henson Company’s existing deal with Disney was winding down, it seemed more and more likely that the show wouldn’t see a third season. A clip show was likely an inexpensive way to give the series some sense of closure by celebrating the show’s best moments.

The premise of the episode is that the Muppets had pre-taped a new episode before they went on vacation, but as a result of a cheese-eating contest between Rizzo and Carl gone horribly wrong, Carl not only ate the tape, but the tape player as well. Thankfully, Gonzo has come to the studio to retrieve something, and Rizzo enlists him to help him host a clip show (though how they’ll do that without a tape player, I don’t understand. But clip show beats no show in my book, so I’ll keep quiet.)

There really isn’t much more to say about these clips that we haven’t already said before in our previous reviews, but I think whoever edited these packages deserves some recognition. They managed to keep these clips tight and made sure to only show the best of the best in each moment, cutting out before any clip overstays its welcome. The zenith of the editor’s work comes at the end of the episode in a celebration of the show’s best violent moments in “Muppets Tonight’s Greatest ‘Hits,’” which shows the most painful clips to the tune of Beethoven’s “Ode to Joy.” It just seems so…Muppety. 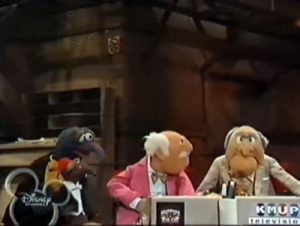 Gonzo and Rizzo make for a great hosting pair (though they’re not really strangers to the roles), adding some fun introductions to keep the show’s pace up. The only real downer is the final joke, where Statler and Waldorf reveal they’ve been showing “The Worst of Muppets Tonight,” which is the same episode. It’s a lazy Statler and Waldorf joke, but it’s not lame enough to ruin the whole episode.

Actually, the real downer for me is realizing that this was the last episode of the show to be produced (even though it wasn’t the last to be aired, which must have been really confusing back in 1997, when they showed clips from episodes no one had seen yet). It’s a decent episode, but with minimal new content, it’s a little sad to think that the final episode had a skeleton crew of puppeteers (with only Dave Goelz, Steve Whitmire, Jerry Nelson, and Bill Barretta being used) and minimal new content. Thankfully, there are three more episodes to enjoy before Muppets Tonight went to that great syndication package in the sky.

In keeping with the spirit of the episode, I’d like to present “The Best of My Weeks With Muppets Tonight’s Also…” 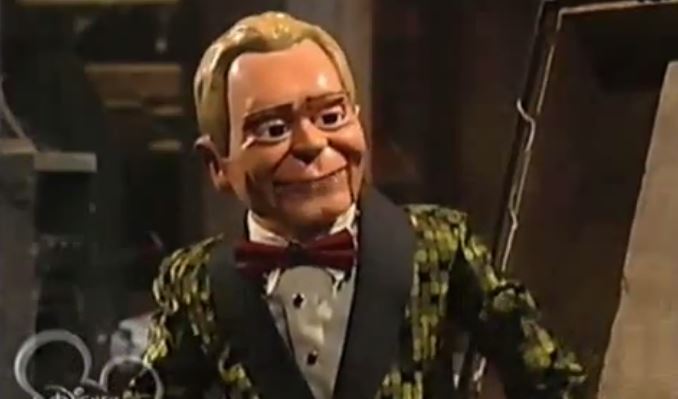 As I’ve mentioned in previous reviews, the later episodes of Muppets Tonight are intriguing, as rather than having sketches framed around a loose plot like in earlier episodes, the overarching plots take a bigger role in the episodes. While this usually comes to the show’s benefit, unfortunately, this doesn’t always work out, especially in the case of “The Gary Cahuenga Episode.”

The show opens with Rizzo and Clifford making their way into KMUP’s basement, where they encounter an old dusty box containing Cahuenga (pronounced Cah-hoing-ah, like Professor Frink having his foot stepped on), a ventriloquist’s dummy whose ventriloquist, Chick, has long since gone. Cahuenga has been locked in the box since 1956, and thinks he’s going be on that night’s episode of The Ed Sullivan Show (though Chick may have been bumped for some guy named Jim Newsom).

After Gary comes to grips that over forty years have passed and Chick is gone, the Muppets hold auditions for a new ventriloquist. Everyone fails to deliver the punchline to Cahuenga’s joke, “who was that lady I saw you with last night?” (I guess Chuckie was unavailable.) And..that’s really where the story ends. There’s no resolution beyond that. The final moments of the show are devoted to Johnny Fiama, who uses Sal to perform a hidden camera prank on boxer Evander Holyfield that goes horribly wrong, forcing Fiama to go into hiding. It’s a decent sketch, but it does seem like an awkward way to end the episode. 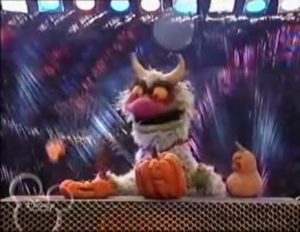 Elsewhere, parodies abound as Gonzo presents Lollapalosers: acts that couldn’t get into the Lollapalooza music festival, consisting of Smashing Pumpkins (Carl smashing singing pumpkins in a manner that goes beyond the standard Muppet-style cartoon violence), and the Benedictine Monkees (which really works in terms of concept and design execution; props to the crew for adding tonsures to the character’s long-haired wigs).

But perhaps the strangest thing of all may be the Thor, God of Thunder sketch, where Thor waits in a DMV staffed by Kathy Najimy, who’s never mentioned by name. She’s only recognized in the credits. Even in 1997, she must have been a recognizable celebrity. No one ever thanks “special guest Kathy Najimy,” which is a shame, because she is a gem in the sketch.

As the title implies, there’s no featured guest star for this episode, although another gem comes from special guests Penn and Teller, who perform their “Blast-Off” illusion before revealing how they did it. To me, Penn and Teller are the perfect guests to have on a Muppet project. Their humorous and slightly subversive style matches the Muppets’ tone brilliantly. So the episode has a few bright spots, but overall, it comes well short of being a great episode.

Personally, I find this episode to be disappointing because the main plot is rail-thin and never gets resolved, and most of the other sketches are sorta funny, but not laugh-out-loud funny. The character of Gary Cahuenga falls flat, and the 1956 jokes that might have been funny in 1997 feel even more awkward in 2016. But we still have two more episodes left, and I have high hopes that Muppets Tonight can stick the landing.

Click here to wait in a DMV staffed by Kathy Najimy on the Tough Pigs forum! 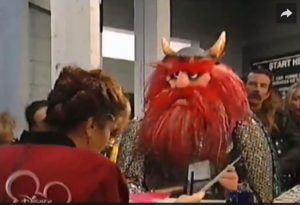