My Week With Tomie DePaola Part 5 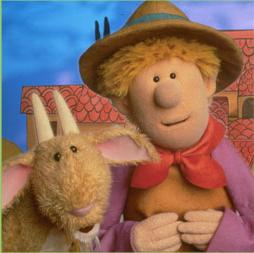 As my week with Tomie dePaola draws to a graceful close, I’d have to say that the thing I find most puzzling about the whole affair is Tomie’s extremely loose definition of the word “story.” I mean, the whole show is about telling stories, but they don’t seem to be making any effort to present a coherent model of what a story actually is.

Now, according to my sources – namely, Mrs. Helrich, my fourth-grade English teacher – a story has to have conflict. It can be conflicts between people, conflicts between people and nature, or internal conflicts within a person – but if there’s no conflict, there’s no story. The action should build to a climax, and end in a denouement; at the end, we should all learn something about ourselves and about the world.

Using this rough definition as a guide, let’s take a look at some of the so-called “stories” presented by Tomie dePaola today.

Strega Nona tells a story about Big Anthony losing his hat, Bambolona finding that her flowers are gone, and Strega Nona noticing that her dancing potion is missing. They all blame each other for the thefts, until a goat dances by carrying flowers and wearing a hat.

The Judges Say: There is conflict here between people, and between people and animals. This is not an interesting story, but it is a story.

The Score So Far: One out of one.

Tomie tells us that “every picture tells a story,” and shows a photo of an unseen figure molding an animal out of clay.

The Judges Say: No conflict, no action, no climax. This is not a story. This is an illustration.

Score: One out of two.

Tomie shows us a box-sculpture that he claims tells a story. Here is the entire, unedited transcript of his story: “This is the meeting of the great white marshmallow chickens – and every year when this occurrence happens, the armadillos come to worship the big armadillo in the basket – not to be confused with the chicken in the basket!”

The Judges Say: This is not a story. I’m not exactly sure what this is.

Score: One out of three.

The Judges Say: There is some conflict and drama here. In fact, this is a Star Trek episode. Tomie will soon be licensing Egg Carton action figures.

Score: Two out of four.

The guest storyteller is a percussionist, who claims: “The instruments are the story – because they are the power and the history of the people who created those things.”

The Judges Say: These are not stories. These are artifacts.

Score: Two of out five. It’s not looking good for Tomie.

A little girl shows off her tiger mask, and tells a story about it: “I’m the three-eyed brown tiger with two missing teeth. In the morning, he’ll eat some pears and pineapples. And then after he eats, he’ll go sit down someplace, like under a shady tree, and read.”

The Judges Say: This is not a story. This is a tiger’s Day Planner.

Final Score: Two out of six.

These representative samples prove what I’ve been saying all along – Tomie dePaola would not know a story if it stole his hat and made him an omelet. In fact, it seems like this entire program is just Tomie’s way of dealing with the fact that he doesn’t really know what constitutes a story – a kind of televised art therapy where he faces the horrible emptiness at the core of his life. I’m looking forward to Tomie making a breakthrough round about the middle of season three, where he suddenly snaps and realizes that he’s been wasting his life boring people. This epiphany may lead him towards a richer and deeper understanding of himself. Who knows what might happen then? Maybe he’ll become a secret agent. Maybe he’ll train for the Olympics. Maybe he’ll pose as a newspaper reporter and fight crime.

So how should I resolve this titanic struggle between me and Tomie dePaola? Should I steal his hat? Make him an omelet? Or worship the armadillo in the basket?

Maybe I’ll just duck out while he’s not looking. See ya, Tomie. Catch you later, Gabe. Keep on telling stories. Just not while I’m around.

My Week With Tomie DePaola Part 4

My Week with Jim Henson’s The Storyteller Day 1: Hans My Head Hurts

My Week with Jim Henson’s The Storyteller Day 2: Pretty Woman