My Week With Tomie DePaola Part 4 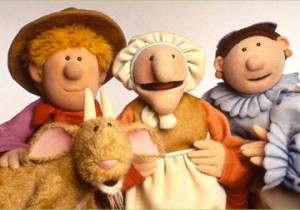 Y’know, I kid Tomie dePaola a lot. I say that his show is dull and useless and unwatchable. And I’m right about that. Very, very right. But even I have to admit that the show can be educational.

For example, today’s episode is all about writing different versions of old stories. As Strega Nona reminds us, “There is no right and wrong in telling stories. Each version is different, and each version has its own beauty!” So I wrote my own version of today’s episode, and I learned a lot from the experience.

In Tomie’s version of today’s episode, Gabe tells Tomie the story of Goldilocks, except Goldilocks is a bear who breaks into the bears’ house to find something to gossip about.

In my version of today’s episode, Gabe steals Tomie’s credit cards and goes on a madcap shopping spree.

In Tomie’s version, “Savage Steve” Holland teaches us how to be an animator: “Here’s a suggestion. Carry a sketchbook around with you, and draw your family, and friends, and pets, and draw them funny. And if you have a particular picture that you like, put it up against a window with the sun in the background, and take a blank piece of paper and trace that drawing, but alter it just a little bit, and then take that second drawing, and alter that one a little bit. And then take a third and fourth one, and keep going, until you’re animating it, and it changes. And pretty soon you’re an animator.”

In my version, “Savage Steve” says this instead: “Here’s a suggestion. Raise some venture capital. Then hire people who can draw better than you can, and pay them minimum wage to draw some really funny cartoons. If they complain about their salary, tell them the profits are being eaten up by distributor costs. Artists don’t have any business sense, so they won’t understand what you’re talking about. When your cartoons become popular, start farming out the animation work to Korea. And pretty soon you’ll license your characters to Burger King.”

In Tomie’s version, a young boy tells us a story about his scarecrow doll: “A man made a scarecrow? And he put a lot of stuff in it? He put it in his backyard? And the scarecrow was alive? And he made a wand? And when there were, like, animals and creatures? He scared them off? Or turned them into other stuff?”

In my version, this boy stays on his medication.

Finally, in Tomie’s version of today’s episode, Tomie tells us the hilarious story of the time he went to see the movie Snow White and the Seven Dwarves and noticed how different the movie version was from the book.

In my version, I learn to love again. My soul is not crushed into tiny black cinders. There is hope, and peace, and laughter. The sun comes up in the morning. It’s a beautiful day.

My Week With Tomie DePaola Part 5

My Week with Jim Henson’s The Storyteller Day 1: Hans My Head Hurts

My Week with Jim Henson’s The Storyteller Day 2: Pretty Woman