My Week with MuppetFest, Day 1: The Huge Kermit on LaBrea Avenue 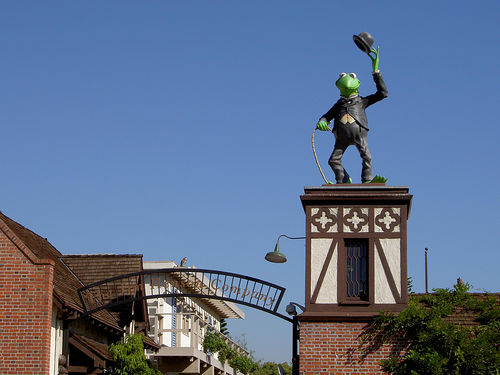 Okay, what else do ya got?

I’m kidding, of course. I’m home from Muppetfest and I’m just finding it hard to describe how great it was. If you were there this weekend, I was the guy sitting in the middle scribbling notes furiously through the whole thing. I wrote down everything, because I am a dedicated Muppet journalist — and not, as you might have supposed, because I’m clinically insane. I understand how easy it is to confuse the two. In my mind, I wasn’t attending Muppetfest. I was covering it. And boy, was there a lot to cover.

I know some of you want every little detail, but there was just too much cool stuff for me to describe everything here. Instead, I’m going to put together a print zine of Muppetfest Memories, which I’ll probably finish sometime after Christmas, and that’ll have all the descriptions and quotes and everything.

For now, here’s what I learned at Muppetfest.

The enormous Kermit statue is dressed like Charlie Chaplin, with a little black suit and a cane, and he tips his hat sheepishly at the traffic going by. Bill and Kynan and Chris and I are standing on the sidewalk, snapping photo after photo. We know we look like tourist fan stalker geeks. Let’s face it — we are tourist fan stalker geeks. We don’t care. There’s a big Kermit up there, and darn it, a photo op like this doesn’t come along every day.

This is the new Henson Company studio lot, of course, which used to be the old Chaplin Studios. And we’re all here for Muppetfest, of course, flying in from around the country and across the world to peer through the gates and dream. Kynan is a comedy writer from Australia, who you may know on the Tough Pigs forum as Carl the Big Mean Bunny. Chris (aka Cardboy) is the illustrator who’s done cartoons for Tough Pigs, Muppet Central and MuppetZine, and he’s flown in from Boston. Bill (aka BKastak) lives about five blocks away in West Hollywood, so when we all converged on his house today, he knew where to take us first. The Hollywood sign? Grauman’s Chinese Theater? Rodeo Drive? He doesn’t even have to ask. We go straight to the big Kermit on La Brea Avenue. This is my Muppetfest posse.

Driving around LA with a running crew made up of overexcited Muppet fans is just as much fun as I thought it would be. Everything is huge and famous, and we’re completely amused by it all. The Museum of Tolerance! Chinese Laundry Shoes! Bob Saget at the Laugh Factory! We’re already relentlessly quippy and hyper, and things haven’t even started yet.

The first big event is the Muppet Central party on Friday night, which Phil and Cindy Chapman arranged at the Crocodile Cafe. We’re late, and by the time we arrive, there’s maybe twenty-five people already sitting down at a long table. Everyone has a nametag with their real name and their screen name on it, and I just start working my way down the table, introducing myself to everyone. You’re ChadKermit! I’m Danny! You’re Fleet Scribbler! I’m Danny! You’re Scarecroe! I’m Danny! That kind of thing.

I’ve never worked a Muppet-fan crowd before, and I don’t quite know how to act. I get kind of noisy and overeager, lunging at people who only half-remember who the heck I am. I keep telling everyone that they’re not at all what I pictured. Everybody is taller and better looking than I thought they would be. I realize that this whole time I’ve been picturing everyone as twitchy, autistic twelve-year-olds.

In fact, everybody is an incredibly nice adult, and most of them are actually really hot, not to put too fine a point on it. I didn’t tell you guys this at the time, because it would have made you uncomfortable, but Muppet fans are collectively much nicer looking than we have any right to be. I’ve been to science fiction conventions before. Now, I don’t want to talk smack about science fiction fans — some of my best friends are science fiction fans — but let’s face it, there ain’t a lot of supermodels down at the comic book store. But the fans at the Muppet Central party, both the women and the men, are a generally nice-looking crowd. We are taking damn good care of ourselves. I’m astonished. I want to sleep with everybody. Now you see why I didn’t mention this at the time.

I sit down at the table, and instantly we all start gossiping about Muppets and Muppet fans. Scott/Scarecroe starts telling me about comparing the Muppet Family Christmas DVD to the original show. He has a lot to say on the subject. Soon, other people sitting all around us get interested in the conversation and join in. This has never happened to me in my whole entire life before. Scott and I get into an argument with DW/Fleet Scribbler and Kevin/FOZZI3B3AR about whether The Great Muppet Caper was a better movie than The Muppets Take Manhattan. I make nasty jokes about The Dark Crystal that people actually understand. I gossip with Mar and Michael (aka StatNWaldorf) about some of our friends who couldn’t make it. Every time I meet someone — Carolyn/Apple, let’s say, or David/Beau — we exchange cursory questions about where we come from and so forth, and then we give up and start talking about Gonzo dolls. This is the best party ever.

There’s a Muppet Impressions contest. Mitch introduces the show in a Kermit voice. Andy does a rendition of Bein’ Green that’s actually very touching. Kevin and Jeff do an old Ernie/Bert sketch. Chris heckles from the sidelines in a terrific double Statler-Waldorf impression. The highlight, though, is Adam — one of the waiters at the Crocodile Cafe who just happens to be a Muppet fan. He didn’t know anything about Muppetfest or any of the websites, but he does an amazing Dr. Teeth and Rowlf, plus he knows all the words to “I Hope That Something Better Comes Along.” And by the way, remember what I said about Muppet fans being really quite handsome? Adam. I rest my case. Mitch and Adam win the contest.

In the excitement of the moment, it almost feels like we don’t even need to see the Muppets tomorrow. Just being here, with a whole crowd of people who speak the same language — it fills me up with love for all Muppet fans. Everybody is so friendly and interesting. I hug indiscriminately.

In fact, I have a message to people on the Muppet forums and newsgroups: Please, please, please stop speaking in character. I always liked FOZZI3B3AR on the forums, but I found his wocka-wocka jokiness to be a little relentless. He turns out to be a really sweet guy named Kevin who’s actually much funnier when he’s speaking as himself. SuperGrover, who used to chat in a really hyperactive “Hellloooo everybodeeeee” style, turns out to be a mellow, thoughtful guy named Travis. Attention, everybody with a Muppet screen name: We already have Muppets. It’s so nice to have the gift of actually knowing you, the real person behind the screen name. When we’re back online, I’d love for us to keep going in that direction.

My Week with MuppetFest, Day 2 Part 4: Get Outta Johnny Fiama!

My Week with MuppetFest, Day 3 Part 1: How Conventions Work

My Week with MuppetFest, Day 3 Part 3: A Lesson for Everyone