My 2:40 With Songs from the Street, Hour One: You Can Dance Now

The following phrases will not be used in this article: Celebrating 35 years of music, entertains and educates, long-forgotten memories, timeless classics.

I mean, I could write that article, but you wouldn’t want to read it any more than I would want to write it. And besides, it would be rude just to do the same ol’ thing when I’m writing about Songs from the Street. Sesame Workshop has gone to all this trouble for their 35th anniversary, putting out a 3-CD set aimed squarely at the Tough Pigs crowd — namely, adults who love Sesame Street and also have kind of a thing for Melissa Etheridge. So how rude would it be, just to write your standard Sesame music review?

No, no. We’re gonna kick this down Tough Pigs style.

That means I’m going to sit down and listen to the whole set — all two hours and forty minutes of it — in a row, without stopping or skipping songs.

Here is my story.

12:00 noon. Sunny day, sweeping the clouds away. Actually, it is a sunny day today. Cool, too. Probably the nicest day we’ve had, after a humid, rainy summer. I could be outside right now. Instead, I’m sitting here listening to The Kids singing The Song. I don’t want to sound like I’m being deliberately iconoclastic, but the Sesame Street Theme is really one of your more unpleasant songs, especially when it’s sung by The Kids. Listening to kids sing is one of the worst audio experiences you can have. One kid singing can be cute, but a crowd of kids is unpleasant noise. Even kids don’t like listening to kids singing. Didn’t they realize that at the time?

12:02. Big Bird singing ABC-DEF-GHI is clearly one of the regulation songs; they’re obligated to start a collection like this with the Theme and then ABC-DEF-GHI. It must be a law.

12:03. Bein’ Green, another regulation song. Heard it, taped it, bought the T-shirt. I while away the minutes flipping through the booklet, which is 68 pages of teeny tiny type. There’s a little potted history of the show: “1976 — Olivia, a photographer, moves to Sesame Street and is a good role model for girls.” 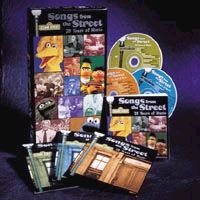 The printed lyrics include every single line of spoken dialogue, plus a note on which album the songs came from. For the songs that have never been released before, the booklet notes which TV season the song premiered on. You know, up until a few years ago, nobody made CD’s with detailed liner notes like this, especially not stuff based on kid culture. Facts were for geeks.

12:10. Ah, back to Muppets. Henson is fantastic as the father in Five People in My Family. He lisps amusingly at the beginning of the word “five” every time he sings it. This is a very sound pedagogical technique that all good teachers know: kids remember what you say if you say it in a funny voice.

So you don’t need me to tell you how amazingly cute that is. There’s a sincerely tentative quality in Grover’s voice through the whole song. Lena sings a peppy song about introducing yourself: “People know you by the little things you do… Show them you care, watch them care for you.” That’s actually great advice, Lena. What a beautiful song.

Grover sings the song back to her, mumbling through the first couple lines, and gradually becoming more confident as he goes. This track has real emotional texture. “You know what?” Grover says at the end. “I am not shy anymore!” Ohhhh! Kid singers, all is forgiven.

12:21. We take a little trip back in time during the introduction to Over, Under, Around and Through. Grover tells us: “Do you know what goes around? This record goes around. So, when I sing about around, you look at the record. Okay?”

Boy. You remember when records went around? Today’s four year olds have no idea what Grover’s talking about.

12:24. In the Count’s spoken introduction to Ladybug Picnic, he says that the song has inched its way up the charts to number 12. And what track is this on the CD? Number 12. That’s the New Obsessiveness for you! They take care of everything.

12:25. Argh! The Kids again! I’m sick with the Kids. They’re singing Somebody Come and Play, which is not a great song to begin with, and only gets worse when it’s sung by children. I look at the booklet. Man, there’s four verses and a bridge for this! Plus a whole bunch of la la’s! This is gonna take forever. It gets even worse during the bridge, when the little girl doing the solo can’t hit the high notes. How is it possible to write a song that’s too high for an 8-year-old girl to sing? Joe Raposo, you’ve done better. I want no more Kids on this set.

12:29. The booklet listing for Just The Way You Are hits another high point for The New Obsessiveness: “Music and Lyrics by Billy Joel, Special Sesame Street Lyrics by Tony Geiss.” I never realized I wanted to know who wrote the special Sesame Street lyrics before. But all of a sudden I do.

I’ve never been big on this song, but Oscar is making it fun. Finally someone is telling Billy Joel to get lost! It’s a public service.

12:33. Joe Raposo’s voice on Everybody Sleeps is buttery and delicious, like warm cookies right out of the oven. I’m glad he didn’t get the screeching kids to sing this one.

12:35. According to the booklet, Rubber Duckie was a Top 20 hit in 1970. You have to wonder what modern radio would be like if this kind of thing could be a Top 20 hit now. There really are reasons to miss the 70’s.

12:39. Okay, I’ve liked this disc so far, but there hasn’t been much that really surprised me. Rubber Duckie, Somebody Come and Play, Do The Pigeon… I know these songs very well.

But Me and Julio Down by the Schoolyard is an unexpected treat.

Who is this kid? I hope she got a recording contract. I love her.

She busts out with another funky get-down at the end of the song, closing with “Everybody dance arouuuuuuund!” Everybody applauds, and she turns to Paul and says: “Can I do it?”

You just did it, baby. Bless you. That track is worth the price of the whole set.

12:41. What a letdown. The next track is Pete Seeger leading a bunch of The Kids in a tuneless sing-along called Sweet-A Little Baby. The track is not improved by Kids randomly blowing into horns and coughing. The last track’s Girl Gone Wild was cute, but not two songs in a row. And just when you think it’s all over, Pete says, “One more time!”

12:43. Man, welcome to 1972, though. Next up, Stevie Wonder does a song called 1-2-3 Sesame Street that he wrote himself. It doesn’t teach anything, and it’s not really about anything except itself — but it features backup singers and Stevie croaking “Furry monster, you and me” with a neat vocoder effect. It’s just the show being hip and now and funkadelic. It’s fantastic. This proves once and for all — as if any proof was needed — that the original Sesame producers were completely in step with their times.

12:46. I’m putting on the second disc in the set, and the first thing you hear is a woman whispering “Sex…”

It’s actually “six,” and this is actually the Pointer Sisters’ Pinball Number Count, but it’s alarming all the same. I have to assume they meant to do that.

To be completely accurate, this is a new mix of the song, using the vocals from all the numbered versions. So every once in a while, the Sisters go “doo doo doo doo-doo, doo doo doo doo-doo: SEVEN!” And then a moment later, they do the same thing for THREE! and ELEVEN! It sounds like they can’t make up their minds. It’s Pointer Sister vs Pointer Sister in a battle for numerical supremacy!

12:49. I’ve Got Two features a long, lazy spoken introduction from the original 1970 cast album, which illustrates the casual, come-as-you-are tone of the early days. Oscar wants to sing his song, but first the whole cast has to make an entrance two by two and say hello to each other. The humans all stand around and talk for more than a minute before they start singing. Once the song starts, they comment on each other’s parts: Gordon even says, “I want my Susan to sing for me!” It creates a very powerful illusion; these are real people, and this is a real place.

During the song, Oscar asserts that he has two knees that are round as you please, which is simply inaccurate.

12:58. There’s more added value on Sing After Me, with Madeline Kahn teaching Grover to sing an “echo song.” She teaches him that when she sings “Yo Ho Ho,” he should sing after her: “Yo Ho Ho.” The music begins, and before Madeline can get out a word, Grover shouts: “Yo Ho Ho!” No, Madeline explains. He has to wait until she starts. “You don’t know what I’m going to say. I could say any number of things.” Grover apologizes. “I will be on my guard.”

He’s stealing from Madeline Kahn! Almost effortlessly! This and the Lena Horne song prove why, in the 1970’s, Frank Oz was regarded as the greatest puppeteer in the world. He just goes and does it.

I’ve now been listening to this music for an hour, and I feel like I could listen to it forever. So far, this set has me in its pocket. And only an hour and forty minutes to go…

My 2:40 With Songs from the Street, Hour Two: Strange Poetry