2:00. So I seem to remember — and I don’t feel like digging through my CD collection to find out if this is true — that Mambo I, I, I was originally recorded by a Muppet called Gloria Esteworm, as a parody/homage to Gloria Estefan. Then a few years later, Gloria herself came in and recorded this version for Elmopalooza. That must have been the coolest thing for the Sesame music people, to have the real performer sing your pastiche of her. I never had a particular opinion about Gloria Estefan before, but this makes me love her. The Beatles never came in to record Hey Food.

2:05. “Hi, we’re Hootie and the Blowfish.” Can you imagine having to say that to people?

2:11. This disc is getting a little slow for me. Monster in the Mirror has the “wubba wubba” problem. Hold My Hand is Hootie and the Blowfish. I’m Talkin’ Love is a Trisha Yearwood ballad. Now I’m listening to We Are All Earthlings, a desperately earnest little groaner of a tune. I haven’t really been happy since Mambo I, I, I, and that was ten minutes ago. Plus, despite the fact that the lyrics are right in front of me, I still find myself completely incapable of hearing the last line of this chorus as anything but “spinning around together on a planet called the Sun.” Which doesn’t make any sense to me.

2:14. Celine Dion has a very peculiar model of how to speak to people she’s just met.

Imagine Celine Dion saying that to you. “And though we don’t know each other well / Somehow it’s not too soon to tell / Our friendship is gonna grow / Who knows how far it may go?”

Step OFF, Celine Dion! The only thing that’s gonna go far is me, away from you. Get your hand off my sleeve.

2:16. Yes! I perk up instantly as soon as REM strikes up the opening chords of Furry Happy Monsters. This is such a simple little parody, and it works so well. The monsters switch back and forth during the song between being happy and miserable, which is a good metaphor for how I feel listening to this disc. REM understands me. 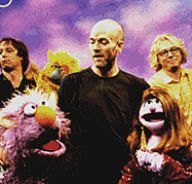 And here’s another score for The New Obsessiveness — the booklet tells me that the Muppet singer in this song is Stephanie D’Abruzzo, which I didn’t know. I always figured that was an REM backup singer. That’s very cool, yet another little factoid I didn’t know I wanted to know.

2:20. Has anyone told NSync that they all sing like girls? I assume somebody’s mentioned it to them by now.

2:21. For some reason, A New Way to Walk sounds terrible, like it’s not mixed properly. Destiny’s Child sounds muffled, and there’s “walking” sounds that are way too clear and distracting. Oog. I don’t really like the song in the first place, so I don’t care that much. Although it is worth it to hear Elmo shout “You go, Beyonce!”

2:29. Oh, no! Not Sing again! Didn’t we do Sing already? And this time with Dixie Chicks! I am being punished. I’m sorry I said bad things about Joe Raposo, really I am. At least this version has Muppet chickens, who are clearly trying to upstage the Dixie Chicks and make them laugh. It works, they laugh. Joey Mazzarino must be in there somewhere.

2:31. According to the Fugees, A is for achievement, B’s for beneficent, C is for commitment, and D is for diligence. And P is for Prakazrel.

I go to my computer and do a Google search for Prakazrel. It’s the name of one of the Fugees. Are kids supposed to know that? For one scary moment, I thought it was backmasking.

2:36. In the booklet, I’ve gotten up to the blurb on 2003, which lists the following historical event: “In celebration of Sesame Street’s 35th Anniversary, Songs from the Street — 35 Years of Music, the 3-CD Box Set releases in September.”

Well, yeah. I know that one. I’m listening to it right now. Are they allowed to do that?

2:38. The set concludes with Sesame Street Theme Remix, a dance version of the theme, complete with samples of Muppet dialogue and snatches of The Five Song and What’s The Name of That Song?

It starts with a sample of Cookie Monster, announcing that he’s going to play the piano — which leads into the piano line for the song — and then halfway through, they do the same trick with a sample of Ernie talking about playing groovy rhythms on the drums. It’s really clever.

This is like the 2003 equivalent of Stevie Wonder doing 1-2-3 Sesame Street. This proves that they can capture the spirit of 2003 just as perfectly as they did 1972.

2:41. And, just like that, the set is over. I’ve spent most of the afternoon listening to non-stop Sesame Street music. And the weird thing is, I should want to stretch my legs, go outside, do something else for a while… but I’m itching to hear Me and Julio again. And maybe Furry Happy Monsters, and 1-2-3 Sesame Street, and maybe one more spin of Pinball Number Count… Well, maybe I could make it an even three hours. I think The New Obsessiveness must be contagious.

My 2:40 With Songs from the Street, Hour One: You Can Dance Now

My 2:40 With Songs from the Street, Hour Two: Strange Poetry