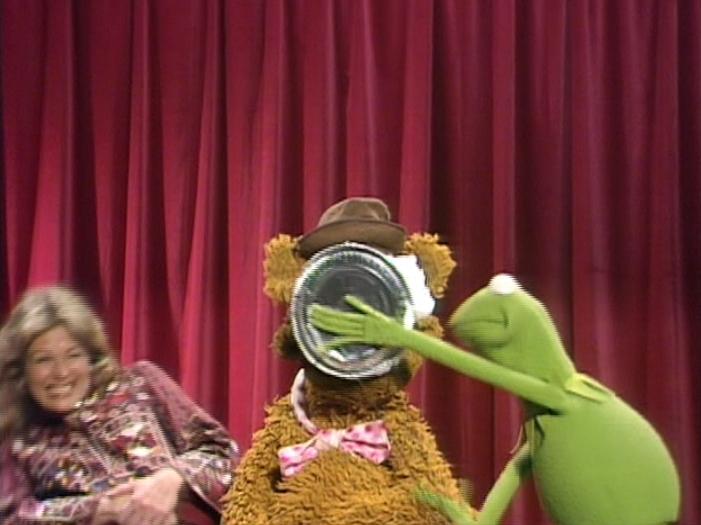 Did you participate in the #MuppetationalMay Challenge? You can read more about it here, but basically: Each day in May, we posted a prompt on Twitter, like “What’s your favorite episode of Fraggle Rock?” or “What’s your favorite Muppet Christmas production?” and everyone on the internet was encouraged to use the #MuppetationalMay hashtag to respond.It was conceived by Tough Pigs pal Clayton Roederer, and it was a lot of fun. Also, it taught me that pretty much every Muppet thing has both lovers and haters. You’ll see what I mean.

At some point it occurred to me: This would be a fascinating way to find out which Muppet characters, episodes, movies, and things are the most popular. Which ones pop up most often in fans’ hashtagged tweets? And so, because I’m very strange, I compiled the Twitter responses from the most interesting prompts, and turned it into a series of pie charts. Yes, pie charts! I’m so cool.

Now, I can’t guarantee that I caught every single tweet. I’m only human. And I left out a few categories, mostly because there were too many different responses to make a comprehensible pie chart (as you’ll see, some of these already turned out pretty darn crowded). But I hope you find this stuff 50% as fascinating as I do! Read on! 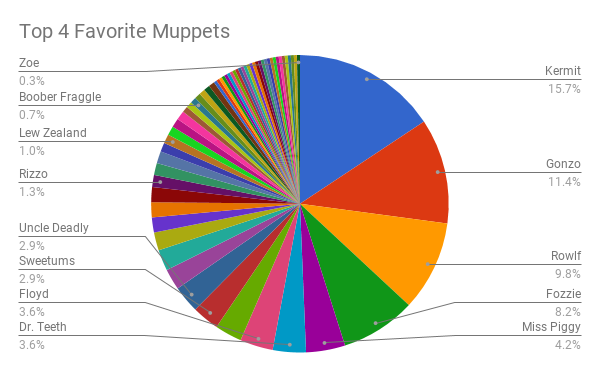 -It’s no surprise that Kermit was the most popular, but good for Rowlf for coming in at #3!

-Also, good for Hilda for making the list at all! 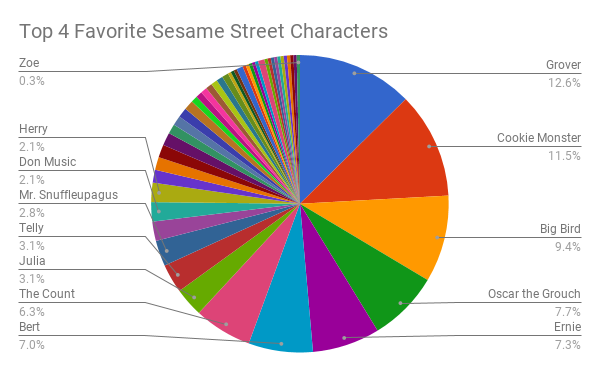 -A few characters tied at 2.1% and got squeezed out of getting their own labels on the pie: Elmo, Don Music, Herry.

-Dang, there are a lot of Sesame Street characters.

-Wow! Grover beat out Cookie Monster! Who saw that coming?

-Some people named Bert & Ernie as one character, and some named them separately. So I listed them as three separate characters: Bert, Ernie, and Bert & Ernie. Ernie won out! 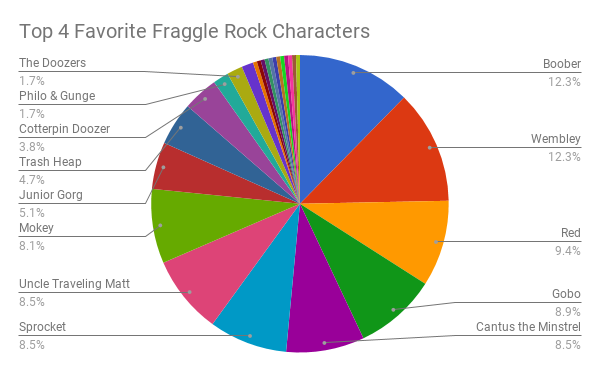 -Most people considered Philo & Gunge to be a single collective character. I’m inclined to agree, but only if all those people know which is which.

-All of the “Fraggle Five” placed in the overall top five… Except Mokey, who placed behind Traveling Matt and Sprocket. Poor Mokey.

-It’s not surprising that Cantus, a Jim Henson character, placed so highly. And yet his other character Convincing John didn’t even show up! I guess he’s not so convincing after all. 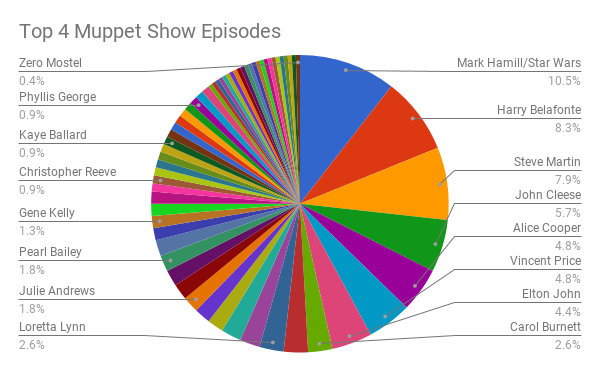 -Nothing too shocking here. It’s hard to compete with the thrill of seeing Miss Piggy sharing the screen with Luke Skywalker, the transcendent joy of “Turn the World Around,” or the sight of John Cleese in a Viking helmet.

-I noticed that people who named Vincent Price tended to also name Alice Cooper. Those are the fans who like spoooooky stuff. 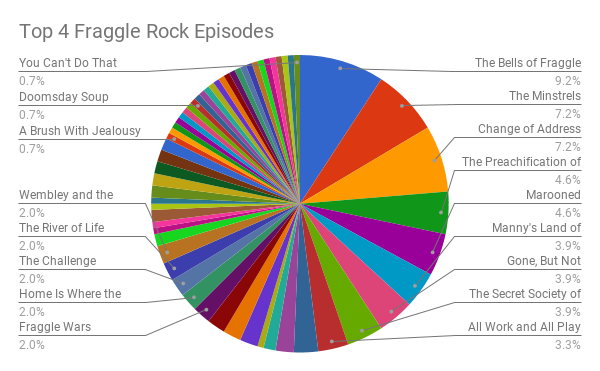 -Additional episodes named that didn’t get their own label on the pie: “A Cave Of One’s Own,” “Blanket of Snow, Blanket of Woe,” “Boober and the Glob,” “Boober Gorg,” “Capture the Moon,” “Catch the Tail by the Tiger,” “Doomsday Soup,” “I Don’t Care,” “I Want to Be You,” “Inspector Red,” “Invasion of the Toe Ticklers,” “Junior Faces the Music,” “Junior Sells the Farm,” “Mirror, Mirror,” “Mokey, Then And Now,” “Playing ’til It Hurts,” “Red’s Sea Monster,” “The Voice Inside,” The Thirty-Minute Work Week,” “Uncle Matt Comes Home,” “The Day the Music Died,” “The Gorg Who Would Be King,” “The Great Radish Famine,” “The Honk of Honks,” and “Wembley’s Wonderful Whoopie Water.” 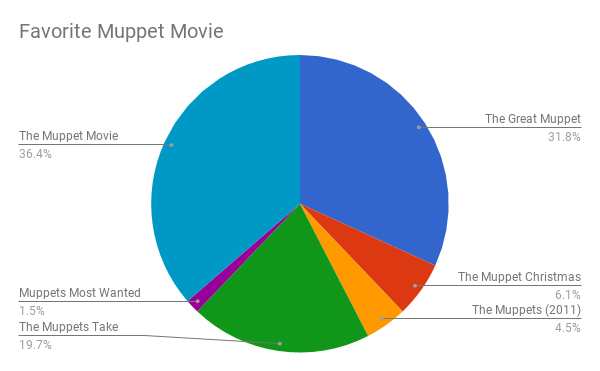 -All the theatrically released Muppet movies show up here except Muppet Treasure Island and Muppets From Space. 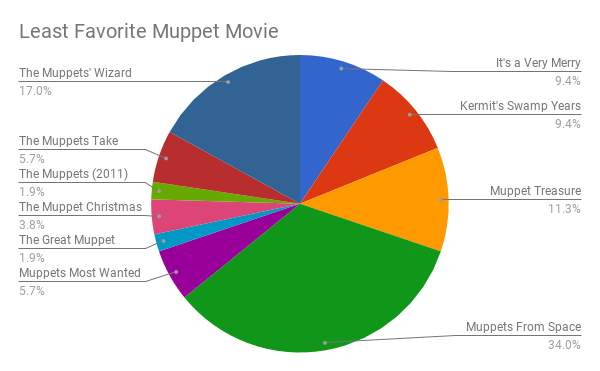 -Every theatrically released Muppet movie shows up here except The Muppet Movie. Everyone likes that one! Or do they…? 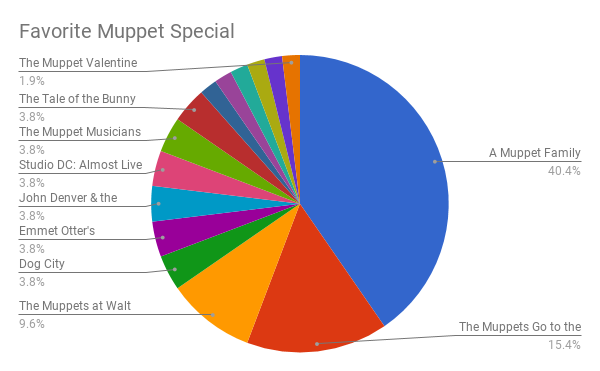 -It’s hard to argue with that top three, isn’t it?

-Look at that tie! Dog City, Emmet Otter, Rocky Mountain Holiday, The Tale of the Bunny Picnic, Musicians of Bremen, and Studio DC. Equally beloved specials, for sure. 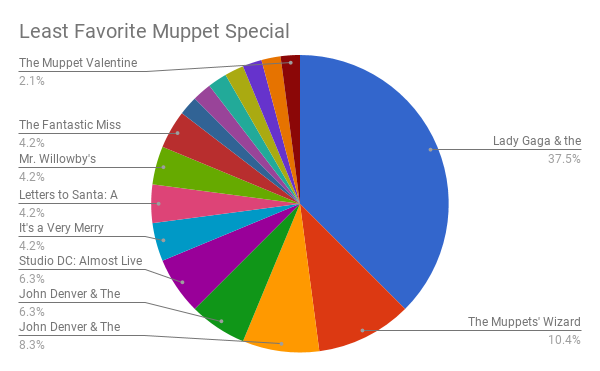 -A bunch of specials tied with 2.1% and got squeezed out of getting their own labels on this pie: A Muppet Family Christmas, A Special Sesame Street Christmas, Dog City, Hey Cinderella, The Frog Prince, and The Muppet Show: Sex & Violence.

-Did you know there are at least three humans on Earth who don’t like John Denver and the Muppets: A Christmas Together? And one who doesn’t like A Muppet Family Christmas? 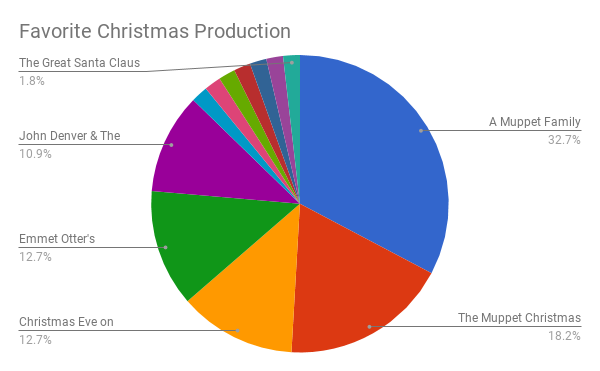 -Have some Christmas pie (chart)!

-A bunch of productions tied with 1.8% and got squeezed out of getting their own labels on the pie: A Berry Bear Christmas, the Arthur Godfrey Sketch on The Ed Sullivan Show, It’s a Very Merry Muppet Christmas Movie, Letters to Santa, The Bells of Fraggle Rock, and The Christmas Toy. 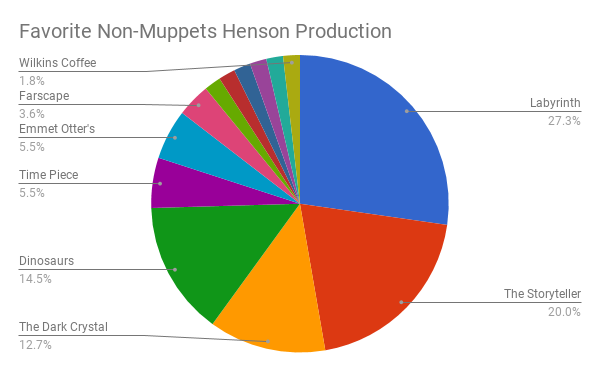 -A bunch of productions tied with 1.8% and got squeezed out of getting their own label on the pie: Bear in the Big Blue House, Fraggle Rock, Julie’s Greenroom, Teenage Mutant Ninja Turtles, and The Christmas Toy.

–The Storyteller is more popular than The Dark Crystal?! There’s a tale I wouldn’t have believed.

-It’s interesting what some folks consider to be non-Muppet productions. I always think of Emmet Otter as a Muppet doohickey. 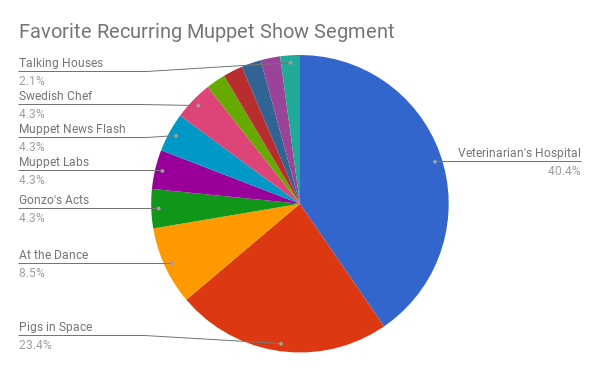 -A few segments tied with 2.1% and got squeezed out of getting their own labels on the pie: Musical numbers, “Panel Discussion,” “Bear on Patrol,” and Doctor Teeth and the Electric Mayhem songs.

-I was so sure “Pigs in Space” would be the overwhelming favorite. Shows what I know! 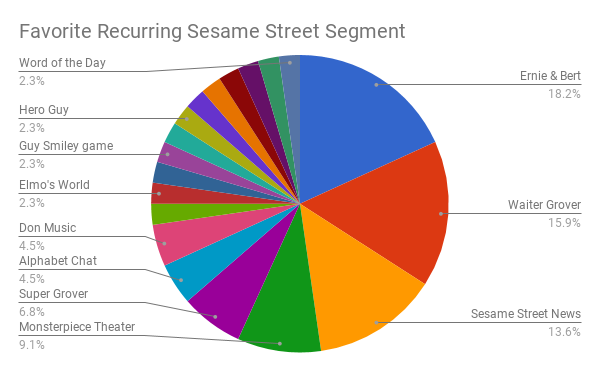 -A bunch of segments tied with 2.3% and got squeezed out of getting their own labels: “Crumby Pictures,” “Here Is Your Life,”Ernie & Lefty sketches, “Journey to Ernie,” Kermit & Grover sketches, Muppet & kid moments, “One of These Things Is Not Like the Others,” and “Trash Gordon.”

-A strong showing by Grover as a waiter! Lots of fans think those sketches are pretty funny… but they wouldn’t be laughing if they were Grover’s hapless customer. 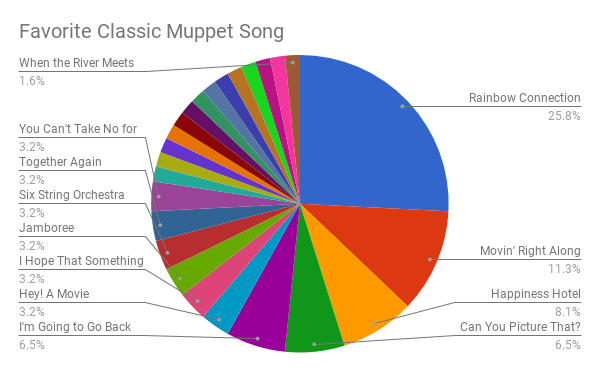 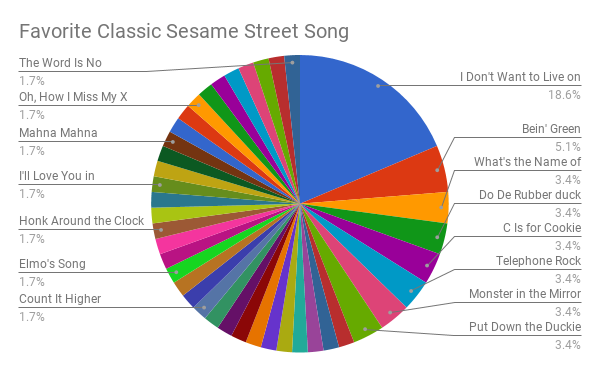 -Dang, there are a lot of Sesame Street songs. 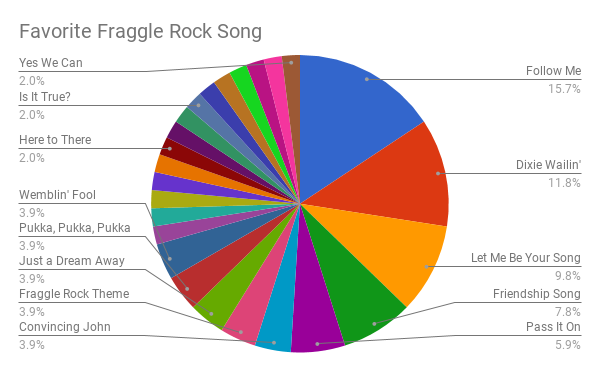 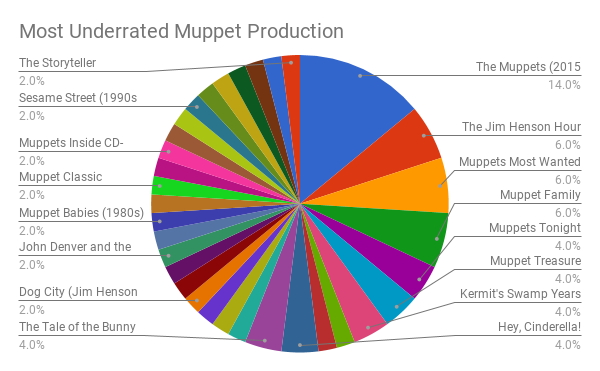 -That “John Denver and the” is Rocky Mountain Holiday.

-So many productions tied at 2.0% at got squeezed out of getting their own labels on the pie: Letters to Santa, the 1980s Playhouse Video compilations, Bear in the Big Blue House, Furchester Hotel, the Harry Belafonte episode of The Muppet Show, literally everything the Muppets do, Muppet Babies (2018), Rowlf on The Jimmy Dean Show, The Great Muppet Caper, The Great Santa Claus Switch, Song of the Cloud Forest, The Muppets on Puppets, and The Secret Life of Toys. 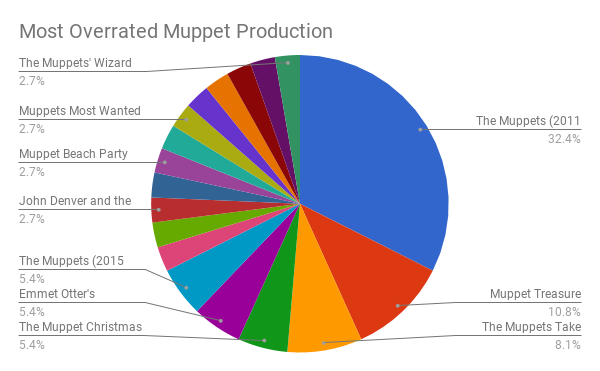 -A bunch of productions tied at 2.7% and got squeezed out of getting their own labels on the pie: tied with 2.7%: “Crumby Pictures,” It’s a Very Merry Muppet Christmas Movie, Manhattan Melodies (the fictional Broadway musical), Muppet Guys Talking, Sesame Street (current era), The Great Muppet Caper(!), and The Muppet Movie(!!!). 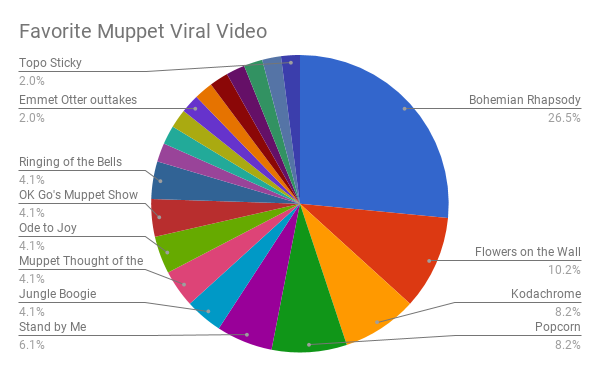 -A bunch of videos tied at 2.0% and got squeezed out of getting their own labels on the pie: “Classical Chicken,” “Danny Boy,” “Elevator Bingo,” “Food Fight” Muppisode (Gordon Ramsay), “Habanera,” Kermit’s Ice Bucket Challenge, Kermit’s TED Talk, and “Stars and Stripes Forever.”

-Everyone knew “Bohemian Rhapsody” would be the most popular, but it’s fun to see so many others. 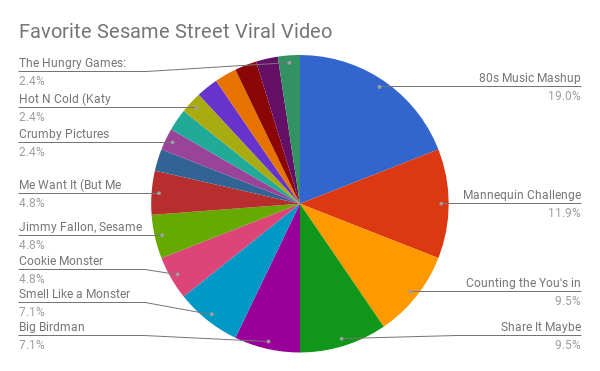 -Several videos tied at 2.4% and got squeezed out of getting their own labels on the pie: “A Lovely Sunny Day” with Zachary Levi and Bert, Entertainment Weekly videos, Julia videos, “Sesame Street Puppeteers Explain How They Control Their Puppets,” “Star S’Mores,” and “The Cast of Sesame Street Answer the Web’s Most Searched Questions.” 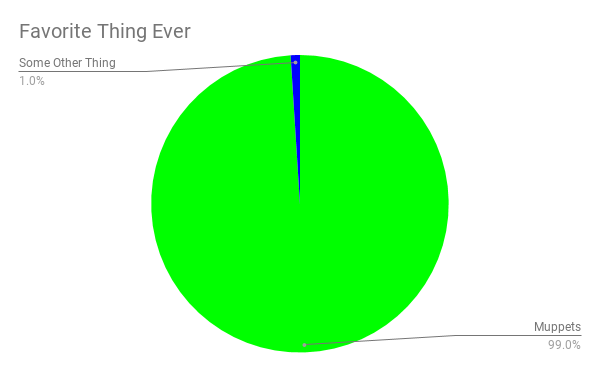 -Wow, check that out! I guess everyone really likes Muppets!

And there you have it! Thanks to everyone who joined in on the #MuppetationalMay Challenge, and to Clayton Roederer for helping us cook this whole thing up. And speaking of cooking, I’m out of here… For some strange, unfathomable, completely inexplicable reason, I’m really craving pie right now.

Click here to get squeezed out of getting your own label on the Tough Pigs forum! 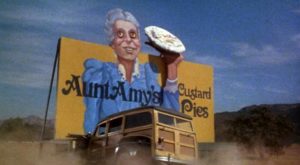 Sisters are Doing it for Themselves: Introducing Frog Kissin’ (A Muppet Podcast)