Note: This interview took place before the release of The Muppet Show Comic Book’s Pigs in Space one-shot. Click here for our review of that issue! 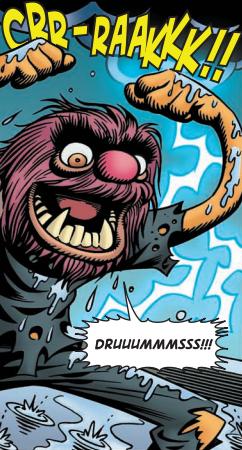 It’s been a while since our last interview with Roger Langridge, so we’ve got a little catching up to do. In our latest Q&A, we chat with Roger about his recently completed “Treasure of Peg Leg Wilson” story arc. Take it away, Roger! And then give it back to us so we can print it on our website!

ToughPigs: How does it feel to be finished with your first 4-part Muppet Show story arc?

Roger Langridge: Very relieved that I got to the end without the narrative completely falling apart! It occurred to me while I was about halfway through that an 88-page story is the single longest comic story I’ve ever written, to date. That made me kind of nervous.

TP: How do you feel your work has improved since the ?¢‚Ç¨?ìMeet the Muppets?¢‚Ç¨¬ù arc?

RL: I’m not sure if I improved so much as learned a few things about what works and what doesn’t. I think the most important thing I’ve learned is that the single-issue stories are a lot more satisfying to write, and I suspect more rewarding to read. Apart from that, I don’t know if there’s been any improvement as such, although drawing the characters without constantly consulting reference has become a lot easier.

TP: What was the most challenging part about writing and illustrating a story that spanned 4 issues?

RL: In the particular case of this one, I think I tried to juggle too many plot threads and it cut into the amount of space I was able to devote to sketches and songs, so the whole thing wasn’t as well-balanced as I might have liked. Like I say, the whole thing was a big learning experience for me. I probably wouldn’t have tackled a story like this at all except I had been encouraged to think in terms of four-issue stories when I was first approached to take the book on, and this plot had already been approved and was ready to go. 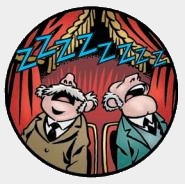 TP: We noticed that there was no Pigs in Space sketch in the latest issue. Was this intentional to avoid Pigs in Space overkill before the one-shot?

RL: I suspect so. I’ve written six issues since I wrote the script for that one, so I can’t remember! I think I may have simply been pressed for space to tie up all the plot threads.

TP: Since The Muppet Show Comic Book will soon be numbered as an ongoing series, will you keep your story arcs to four issues each? If so, why four issues? And aside from fill-in issues, will you be writing any one-shot issues?

RL: My approach from here on in will be to write single-issue stories, but each group of four issues will be loosely connected in some way, with an eye towards collecting them into books once they’re done. (In the case of the next story arc, On the Road, that will only be three issues long, as Boom! want to include the Pigs In Space issue as part of that collection.) So I’m thinking from now on in terms of connecting each four-issue group by theme, rather than by some overarching plot. That feels more natural to me and I think suits the Muppet Show scenario better. There will continue to be longer stories in the other Muppet books like Muppet Peter Pan, of course, for those who enjoy them. I’ve definitely learned a few things from the Peg-Leg Wilson story about my own strengths and weaknesses as a writer in this regard. 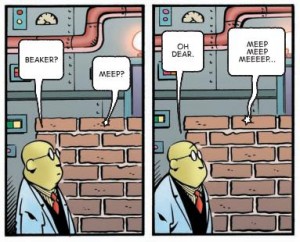 TP: You destroyed the Muppet Theater! How could you do such a thing??

RL: Oh, it’s coming back, don’t worry! Nothing irreversible is likely to ever happen in a Muppet Show comic. It’s not that sort of comic.

TP: Jim Lewis is thanked on the credits page of each issue. How did he help with the Peg Leg Wilson arc?

RL: I have no idea! Presumably his notes were just dialogue fixes for this arc, because they weren’t passed on to me, and I’ve only seen the second issue so far, so I have no idea whether any of my original lines made it into the finished comic. For all I know he rewrote the whole thing! He made a few suggestions at the plot-approval stage but I really don’t remember what most of them were now, it was so long ago, except to move Kermit’s appearance forward, so it wasn’t all Kismet for the first few issues. Which was quite right, in hindsight. 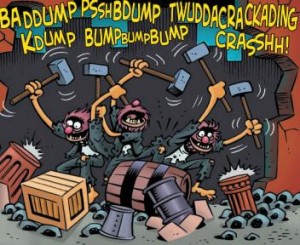 TP: Which Muppets who haven’t gotten their own spotlights in the comics yet do you think deserve to be front-and-center in future arcs?

RL: Issue #4 is centered around Sam the Eagle, #7 will shine a light on Bunsen Honeydew and Beaker. There’ll be a big bit of Scooter in the arc following that one. I’m going to try to mix it up a bit between these kinds of characters and the big crowd-pleasers like Fozzie and Gonzo — who I ignore at my peril!

TP: We noticed that you mentioned that ?¢‚Ç¨?ìMuppet Show: Guest Stars?¢‚Ç¨¬ù will be your next story arc after ?¢‚Ç¨?ìOn the Road?¢‚Ç¨¬ù. Can you tell us anything about the story?

RL: Bunsen Honeydew invents a machine that can bring characters from history or literature to life for twenty-four hours. So there’ll be four issues of human guest stars — Hamlet, Sherlock Holmes, Cleopatra and Victor Frankenstein. Plus a couple of pages featuring Galileo which I’m probably far too pleased about for my own good.

RL: The Muppets have to tour while the theatre is being reassembled from the rubble, so they travel from town to town. They discover on the way that, for one thing, Statler and Waldorf have a very large extended family… meanwhile, Fozzie goes solo for a couple of issues, practising his performance skills on the streets (and leaving the gang with an extremely annoying temporary replacement comedian!). This gives me an excuse to do some short back-up Fozzie stories that use some formal tricks like having all the characters speak in pictograms, or constructing a story around letters of the alphabet – which is great fun for me! The final issue has everyone return to the newly-rebuilt theatre, with Gonzo taking the opportunity to run the Gonzo Marathon to raise money for charity as he makes his way back by land, sea, air and, er, fire. (Cannon fire, to be precise.) Boom!, indeed.

TP: Is this the last we’ve seen of Kismet the Toad? He seems like he could be a good recurring villain for Kermit.

RL: My feeling is that it’s fine for me to make up characters (the show introduced new ones all the time), but not recurring ones. This isn’t something I’ve been told I can’t do, I just don’t feel it’s my place to fill up the Muppet universe with my own creations. So when I make up a character for a story, they’re probably not going to continue to appear after the end of that story. (Unless there’s overwhelming demand or something. Like I say, it’s not a rule, just what feels right at the moment.) Glad you liked Kismet, though!

Click here to utterly destroy a Muppet landmark on the ToughPigs forum!