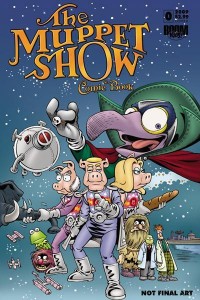 This Wednesday, BOOM! Studios will release The Muppet Show Comic Book #0, and despite its value-less number, it?¢‚Ç¨‚Ñ¢s the first comic in the official ongoing series by writer and artist Roger Langridge. And what better way for him to start than to hand the artistic reins to someone else?

In this one-shot, Rizzo and Fozzie Bear visit a movie studio to pitch their Pigs In Space film idea to two ominous and shadowy figures. Their story involves a universe-wide romp for Captain Link Hogthrob, First Mate Piggy, and the Imperturbable Doctor Strangepork, as they stumble through several science fiction parodies and references.

Though this issue is mainly Pig-oriented, it is still built like an episode of The Muppet Show. Fozzie and Rizzo handle the bookending sequences, and familiar sketches like the Muppet Newsflash, Reporter Kermit on Koozebane, and a futuristic Muppet Labs keep the show moving forward. But more importantly, it helps to make this #0 issue fit comfortably with the rest of the Muppet Show Comic Book series.

Shelli Paroline gave Roger Langridge a break by handling the art for this issue, and she does a fantastic job. The characters are cartoony, yet still recognizable. Her style lends itself to expressive faces while keeping the core of the puppets in tact. Assuming the details like background characters came from the artist and not the script, Paroline did a bang-up job at filling in the cast with obscure sci-fi Muppets like Koozebanians and Monsters, as well as one-shot characters like the bizarre characters from “Hugga Wugga” and “Java“. She even slipped in a cameo by a familiar face from TV’s Futurama. Of course, Roger Langridge has earned our respect by bringing us so many fantastic Muppet Show comics, so there?¢‚Ç¨‚Ñ¢s no question in my mind as to whether or not he should stay on as both writer and artist. But it would be a shame if BOOM! didn?¢‚Ç¨‚Ñ¢t retain Paroline?¢‚Ç¨‚Ñ¢s talents for more one-shots or miniseries.

I loved Langridge?¢‚Ç¨‚Ñ¢s recently completed ?¢‚Ç¨?ìTreasure of Peg Leg Wilson?¢‚Ç¨¬ù arc, so I?¢‚Ç¨‚Ñ¢m anxious for him to start his next four-part story. But if we have to endure a fill-in issue like this every so often, it?¢‚Ç¨‚Ñ¢s well worth the wait.

The Muppet Show Comic Book #0: Pigs In Space will be in stores on Wednesday, December 9.

Click here to boldly go where no Muppet comic has gone before on the ToughPigs forum!