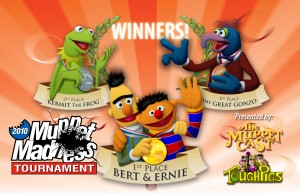 It’s been a fun, exciting, surprising, suspenseful, occasionally frustrating and undeniably geeky ride, but now the 2010 Muppet Madness Tournament, a MuppetCast/Tough Pigs joint venture, is officially over. Yep, that’s all she wrote. It’s the whole ball of wax. The whole bowl of fruit, the whole salad, the entire everything.

Back at the very beginning of the tournament, I predicted that Kermit would win the whole thing — and throughout the early rounds, Joe Hennes and Steve Swanson and I repeated that sentiment in our MuppetCast discussions as the frog dominated the Muppet Show quadrant. But in the end, everyone’s favorite odd couple Ernie and Bert ran away with 4,004 votes in the final round over Kermit’s 2,192, proving once and for all that… Well, I’m not sure what it proves. That a Jim Henson character and a Frank Oz character together are more popular than a solo Jim character, maybe.

The resurrection round/five-way final concept was met with mixed reactions from tournament voters, but it did allow the Great Gonzo to take third place with 1,981 votes, an opportunity he never would have had otherwise, seeing as how he was eliminated by Kermit in Round 1. I’m sure Gonzo is grateful. Meanwhile, all the Sprocket and Bear fans must have either turned their attention to one of the other finalists, because those two were only able to muster up 352 and 272 votes, respectively.

And that’s the tournament! If you want some more in-depth analysis, check out the latest MuppetCast, in which Joe Hennes and I and host Steve Swanson relive every step of the tournament. I feel reasonably certain that I can speak for Joe and Steve as well as myself when I say that I’ve had more fun than a barrel of monkeys watching the tournament play out, and witnessing the startling response in the Muppet fan community and beyond. Same time next year, everyone?

Click here to complain that your favorite didn’t win on the Tough Pigs forum!