Hiya, sports fans! It’s that time of year again! Excitement and anticipation are in the air, along with many basketballs, as the NCAA begins its yearly “March Madness” tournament! And the Muppet fans of ToughPigs.com and the MuppetCast podcast could not possibly care less!

That’s why we’ve joined forces with the MuppetCast’s Steve Swanson to launch the Muppet Madness Tournament, a first-of-its-kind smorgasbord of Muppet fanaticism that takes the structure of that boring old basketball thingy and makes it much cooler by pitting Muppet against Muppet in a fight to the finish. Here, take a look at the tournament bracket for Round 1 (and click to make it bigger): 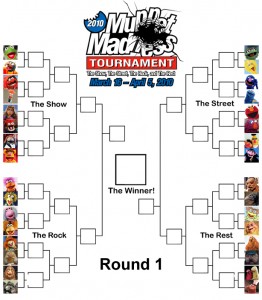 There are four quadrants in the tournament bracket, representing different sets of Muppet characters, and the tournament begins with 16 matchups in Round 1. Head over to MuppetCast.com/tournament to vote for your favorite character in each matchup. After each week of voting, the losers will be eliminated and the winners will move on to the next round, until we finally end up with one winner, one super-champion among Muppets. In other words, it’s a lot like a tournament. Oh, and probably Kermit will win.

Each week you can hear Tough Pigs’ Joe Hennes and myself discuss the winners and losers with Steve Swanson on the MuppetCast, (this week’s show can be found by clicking here) and we’ll make predictions about the coming matchups, and then we’ll be really embarrassed when our predictions are wrong. The tournament runs until April 5, with voting for Week 1 officially opening on March 16… but here’s a little secret: You can actually vote right now!

The tournament is set up so you can vote every 12 hours, so if you really want to, you can set an alarm and vote for Uncle Traveling Matt fourteen times in the first week. Or, if you feel guilty choosing Elmo over Telly, you can vote for both of them.

Tell your friends! Tell your enemies! And head on over to MuppetCast.com/tournament to place your votes today! 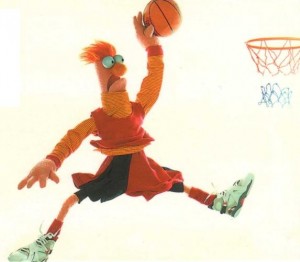 Click here to go mad on the Tough Pigs forum!