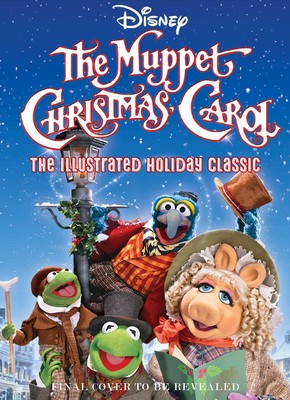 In the years since its release, The Muppet Christmas Carol has become a genuine holiday tradition. If you believe me, just ask anyone under 40 years old to describe what Charles Dickens looked like. There’s a 100% chance they’ll say he was blue and fuzzy with a weird long nose.

Yes, it’s a lot of fun to watch The Muppet Christmas Carol. What if you could also READ it? In a format that took less than an hour and a half to consume? Well, soon you’ll be able to do just that! This October (just in time for Halloween!), Simon & Schuster is releasing a new “Illustrated Holiday Classic” storybook adaptation of the film. The adaptation is being written by Brooke Vitale, who has written a bunch of children’s books, including several for Disney. And it will be illustrated by Luke Flowers. If that name sounds familiar, it’s probably because you’ve seen his Muppet art featured on this very website! So this sounds like a really good team for this storybook.

The thing I’m most curious about is how the book will handle the songs from the film. The official description specifically refers to Christmas Carol as “the beloved musical film,” so it’ll be fun to see if they include lyrics in the text. And of course, that leads to the big question: Will “When Love Is Gone” be included or cut? Stay tuned!

Thanks to Tough Pigs pal Colton for the alert! You can pre-order the book from Barnes & Noble or Amazon now! Click here to be boiled with your own pudding on the Tough Pigs forum!

Let Noel MacNeal Show You How to Make Puppets