Muppet Madness Tournament 2012: Round One! 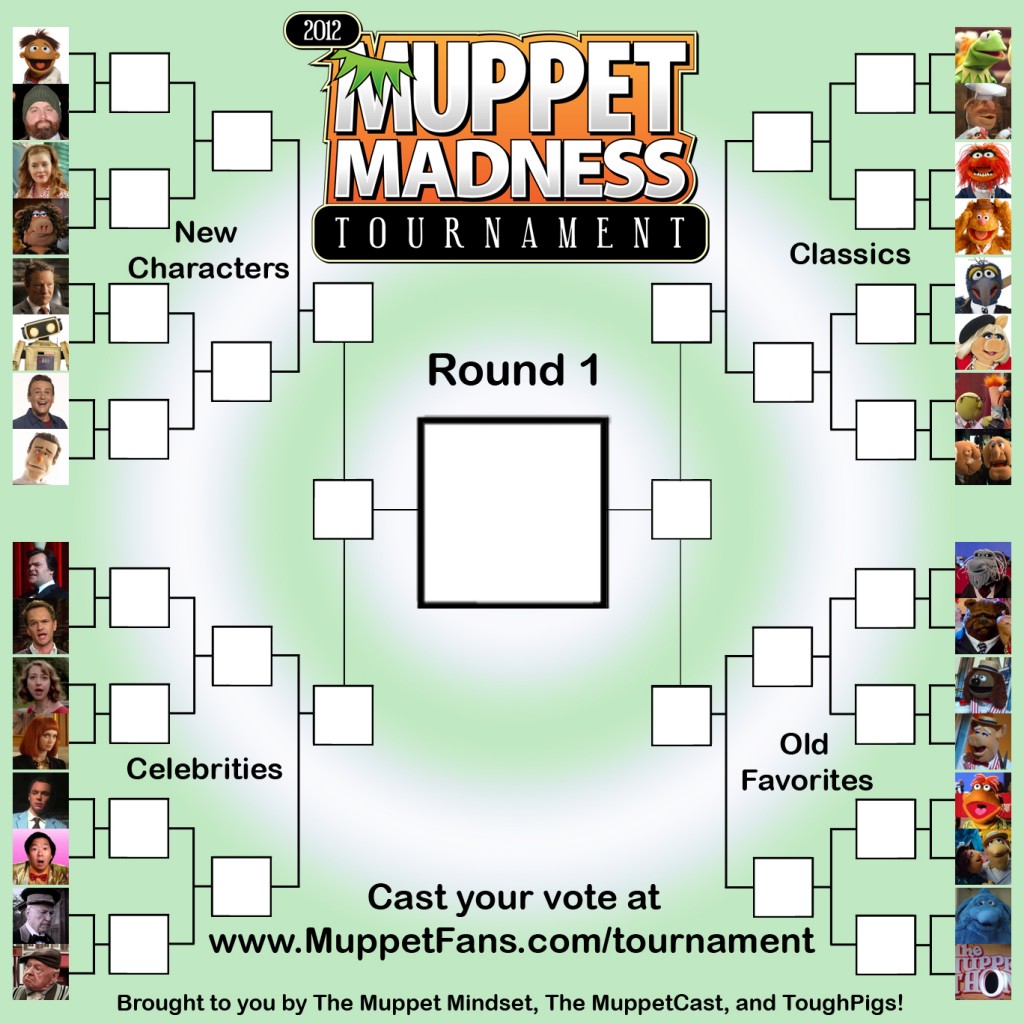 Greetings basketballs fans and Muppet fans alike, and welcome to the 2012 Muppet Madness Tournament!!  For the third year in a row, we’re bringing you the most exciting and only Muppet-themed bracket game this NCAA Championship season!  We’ve joined forces with our pals at The Muppet Mindset, The MuppetCast, and our talented artist friends Dave Hulteen and James Carroll to give you all the chance to vote for your favorite Muppets and characters from their latest film.  And all you have to do is, y’know, vote.

This year, we’ve decided to only use characters and actors from The Muppets, and they’re broken up into four categories: New Characters (featuring the characters who made their Muppetverse debuts in the film), Celebrities (famous people, who may or may not actually be a people), Classics (some familiar faces), and Old Favorites (characters who have made a triumphant return in the new movie).

And for the first time ever, we’re adding a new component to the game: The Muppet Madness Bracket Contest!  Visit the contest site and enter your guesses as to who will win each bout.  Then at the end of the tournament, we’ll tally up the points and award prizes to the top three winners!  Instructions and game rules are at the link above.

Voting is now open, and Round One will conclude at midnight on March 18.  The rest of the contest will continue as follows:

Now without further ado, let’s take a look at each of the contenders, along with our own guesstimations on who will emerge victorious.

Everyone’s favorite Muppet fanatic (aside from Joe and Ryan of ToughPigs fame) is leading off the Muppet Madness Tournament this year!  But that’s unfortunate for Zach Galifianakis’ Hobo Joe, who is ultimately forgettable, yet punctual.

One of them is a very pretty lady, the other is neither of those things (we think).  You couldn’t find two more opposite characters from the film.  And yet that’s exactly what’s happening.  This will be a close race, but we’re guessing Mary will flash the charm and take home the gold.

Chris Cooper’s innate smarminess will win him a few votes (as will his impromptu rap performance), but 80s Robot will be cracking open a can of New Coke at his victory party.  9-volt batteries not included.

We’re going about finding an answer to the ultimate question: Is Gary a man or a Muppet?  Okay, so he’s both.  But Gary the man will bring all of Jason Segel’s groupies along with him to help him clinch the win.

That Jack Black sure does have nice teeth!  But nice teeth will only take him so far when he’s up against the powerhouse that is NPH.  Harris will be winning this thing, just like he wins at life.

Schaal’s high-strung rehab counselor could probably take Emily Blunt’s overworked editor’s assistant in a bare knuckled brawl, but this will be another too-close-to-call fight.  If we had to guess, we’d say Schaal, but only because we’re a little afraid of accidentally mentioning her trigger word.

Walter’s human half is going up against Punch Teacher, but really, this one goes all the way up to the top.  By which I mean Big Bang Theory vs. Community (both of which are on Thursday nights at 8pm).  The Community fanatic in me wants to award the win to Jeong, but Parsons’ brilliant (and surprising) cameo will rake in the votes.

No, they’re not those two old guys in the balcony, they’re two totally different old guys.  But while Arkin’s cameo was much meatier and funnier, Rooney’s delivered that shock factor that the kids love so much.  What I’m saying is, children love Mickey Rooney.  I never thought I’d type those words.

Kermit the Frog vs. The Swedish Chef

It’ll be hard for anyone to have a chance at beating Kermit in this tournament, so the first contender is another Jim Henson character.  But will the gibberish-spouting culinary artist be able to take the amphibious emcee?  Probably not.  But it’ll be fun to watch!

Frank Oz really had a penchant for creating everyone’s favorite characters.  So of course, that makes this match impossible to determine.  Animal will take all the “casual fan” votes, but Fozzie will lay claim to the “uber fan” votes.  If history has anything to say about it, the casual fans will outweigh the rest of us, so Animal’s got the advantage.

Way back in our first Muppet Madness Tournament, folks got pretty angry with us for pitting Gonzo against Kermit in the first round.  They had the last laugh as Gonzo made a comeback in the 11th hour as our “Wild Card” contender, but we’ll probably get the same amount of flak as he goes up against Miss Piggy, a juggernaut of a very different stature.  Gonzo will bring the votes, but no weirdo can take down the pig.

Bunsen and Beaker vs. Statler and Waldorf

It wasn’t easy to narrow down the Dave Goelz/Steve Whitmire duos, but the happy scientists and grumpy old men both made the cut.  Statler and Waldorf made it all the way to the final round last year, proving that despite their decrepitness, they still have that fighting spirit.  And that’s what will keep them coming back in the next round as they presumably beat two men half their age.

Tex Richman’s right- and left-hand men vie against each other as the lead-in to our “Old Favorites” round.  Bobo, having more visibility and memorable one-liners than almost any other post-Jim character will give Deadly a run for his money, but he’ll be saying “Uncle” as the nefarious dragon beats the bear to a pulp.

Rowlf the Dog vs. Link Hogthrob

It’s always a thrill to see a long-missing character return to the spotlight, especially after we’ve pretty much accepted the fact that we may never hear their voices again.  So when the new Link not only made his big comeback in The Muppets, Rowlf was also returned to his B-list status, garnering a lot of screentime and some memorable quotes. And of course, they made up half of the barbershop quartet in “Smells Like Teen Spirit”.  But as happy as we are to see Link again, Rowlf will be moving on to the next round.

Scooter vs. Wayne and Wanda

Of all of the Muppet characters to return with the new movie, who’d’ve thunk Wayne and Wanda would’ve been among them?  Probably not even Wayne and Wanda!  But their accident-prone performances are a welcome re-addition to the Muppet mythos.  But Scooter’s return (not that he really went anywhere, but he has been brought back to a real role of prominence) is a long overdue one.  The gofer is going on to round 2.

This is my favorite battle of the entire competition, hands-down.  When the first photos of the Muppets filming in Hollywood appeared online, the only thing anyone could talk about was Thog.  Thog is back!  Thog is huge!  Thog is the greatest Muppet ever!  We couldn’t be happier for Thog’s presence back with the Muppet gang.  But for all of our excitement about Thog in the months before the movie, nothing thrilled us more than hearing Jerry Nelson’s voice as the Muppet Telethon announcer.  Not an old recording, but the actual Jerry Nelson recording new material for the film.  Due to Jerry’s retirement, we all knew he’d be unable to reprise any of his characters, but we had no idea this Easter egg was heading our way.  This is going to be a really close race, but Thog’s recognizable face (and the fact that unlike Jerry’s voice, he actually has a face) will win this bout.

And those are your 32 combatants in the 2012 Muppet Madness Tournament!  Starting Tuesday, March 13, head over to the Muppet Madness website and cast your votes!  Remember, you can vote once a day until the round is over, so be sure to keep voting for your favorites!

Click here to wonder why you can’t vote for Behemoth on the ToughPigs forum!