Have a Blu-ray Christmas 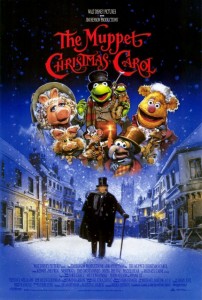 According to Disney’s own Blu-ray and DVD website, a new special edition Blu-ray & DVD combo pack of The Muppet Christmas Carol will be released on November 6. That just happens to be Election Day this year, so after you go to the polls to vote in the general election, you can go to your local video seller to vote for this movie as the president of your Blu-ray player.

In addition to both DVD and a Blu-ray copies of the movie (which seems to be the trend these days), there are several special features listed, including some we’ve seen before and some we haven’t:

-Disney Intermission: Press “Pause” and see what happens when the Muppets Show up at your door to sing your Christmas Carols – Muppet Style!

-Frogs, Pigs, and Humbug: A Behind the Scenes Look

-Christmas Around the World with Gonzo and Rizzo

-Pepe’s Profiles Presents: Gonzo, Portrait of the Artist as a Young Weirdo

Oooh, character commentary? That wasn’t on the previous DVD release! The “Disney Intermission” feature was included on the Muppets movie disc as well, and it was pretty fun. When you pause your movie and you get Muppets running around on your TV, you tend to not want to unpause. The “Muppet Holiday Sing Along” also sounds new, so that’s exciting. It can only be a good sign that Disney is willing to shoot new material to accompany an old movie, and of course, Muppets and Christmas songs go together like eggnog and Winter Oreos.

Thanks to Tough Pigs pal Brian Knatchbull for the alert! Click here to anticipate seeing the Ghost of Christmas Present’s beard in high definition on the Tough Pigs forum!

Is It Too Early For Rats Singing Christmas Carols?