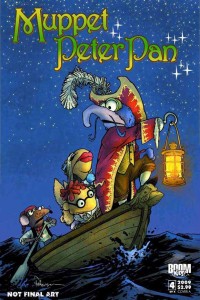 The good news: Very soon, Boom! Kids will be bringing us the new Muppet adaptation comic Muppet King Arthur. The less good news: The beginning of King Arthur means the end of the delightful Muppet Peter Pan, the fourth and final issue of which is available in comic shops this week.

We all know Miss Piggy’s character isn’t going to die, but it’s hard not to be genuinely concerned for her, isn’t it? I was expecting Kermit to call on us readers to help restore Piggytink’s fairy mojo by clapping our hands, which is what happens in the stage play — I was even preparing to clap at my copy of the comic book — but the means of reviving her in this story is more emotional, and even romantic, as it advances the comic’s Kermit and Piggy arc. 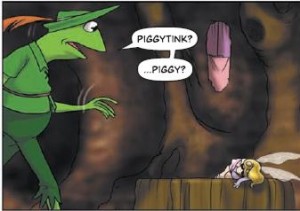 And believe it or not, Pepe serves as the voice of wisdom who tells Kermit/Peter what to do. It’s an odd choice, as we’ve really never known Pepe to have even a glimmer of emotional maturity. I guess he was the only Lost Boy who happened to be around.

It’s been fun to see what kind of liberties the creative team takes with the original Peter Pan story in this comic, and this issue includes some of the biggest departures from the source material. Without being too spoiley-spoiley, I’ll just say that J.M. Barrie would probably be pretty surprised to see how the climactic confrontation between Peter Pan and his hook-handed pirate nemesis finally plays out in this version.

And through the whole thing, the characters continue to look and sound like Muppets. There’s even an appearance by an obscure, minor Muppet Show character, which would have been more exciting had he not already appeared recently in The Muppet Show Comic Book.

Muppet Peter Pan has had adventure, comedy, romance, and plenty of heart (verging on too much heart at times, but still well within acceptable Muppety bounds). And now it has a satisfying ending too. I’m looking forward to future Muppet adaptation comics by new writers and artists, but I’d love to see the Randolph/Mebberson team work on another one of these things. And if they got to do a fill-in issue or arc on the Muppet Show comic, well, I certainly wouldn’t complain. 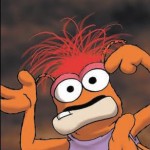 Click here to never grow up on the Tough Pigs forum!