After two issues and one Free Comic Book Day giveaway, this phase of Fraggle Rock comics is coming to a close with issue #3 (in stores today!). We were regaled with stories about Fraggles lost in the Gorgs’ garden, what Fraggles do with a new-found pocket watch, and Red’s concussion. And we read about feline trespassers in the Rock, Uncle Traveling Matt vs. a garbage truck, and the secret origin of Convincing John. And believe it or not, but there are even more stories to be told with the attention-deficit Fraggles, the workaholic Doozers, and the bigger-than-a-breadbox Gorgs in issue #3! 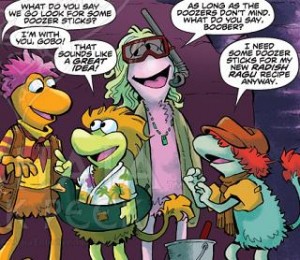 The lead story in this issue was written by Adrianne Ambrose and illustrated by Joanna Estep (check out our interview with them right here!), who are responsible for last issue’s Uncle Traveling Matt story. “Where Have All the Doozers Gone?” asks the all-important question that we ask ourselves every night before we nod off to slumberland. Seriously, where are those Doozers at? It seems that the Fraggle Five can’t find a Doozer (or more importantly, a Doozer stick) anywhere! Of course, they’re off somewhere building a super-secret construction at the suggestion of good ol’ Cotterpin Doozer.

Just as before, Ambrose and Estep handled their Doozer duty diligently. My only complaint is that this story takes up much more space than any other from the series. It’s 20 pages long, and it probably didn’t need to be. And I lied, I have a second complaint: in this story, Doozers look like they’re about the same size as a Fraggle from the Gorg’s perspective. I understand that the needs of the story require Junior Gorg to be able to actually see the Doozers, so they’re a bit larger. But if a Fraggle and Gorg were seen in the same panel in this story, the Fraggles would come up to the Gorgs’ knees. And that ain’t right. Still, this story did give us the comic book debut of Large Marvin, and I really can’t complain about that.

Short story #1 is “Party, Doozer Style!”, brought to us by writer Grace Randolph and illustrator Whitney Leith (check out our interview with them here). Randolph is no stranger to Muppets in comics, as she wrote the wonderful Muppet Peter Pan miniseries from BOOM Studios. In this story, Cotterpin Doozer has yet another harebrained scheme to try and get those persnickety Doozers to have a little fun for once in their measly little lives. Cotterpin’s plan involves streamers, party games, and a cute bob haircut for herself. But of course, nothing ever goes as planned. Though if anything did go as planned, it was probably organized by a Doozer. Those cats sure know their way around a blueprint.

The story is very cute, and is a nice highlight for Cotterpin. She’s a tough character to write since she’s the only rebellious Doozer and identifies with Fraggle culture. She’s a woman of two worlds, and Grace Randolph handled it very well. The plot moves quick and gets out quicker, giving us a full view of how Doozers like to let their hair down (so to speak) without too much detail. The highlight for me was Whitney Leith’s art, which is cartoony yet expressive. Her Doozers are adorable, and they look just like the puppets while still making them look animated. I hope she gets a chance to show off her skills again with the next batch of Fraggle Rock comics with another species or two from the show. 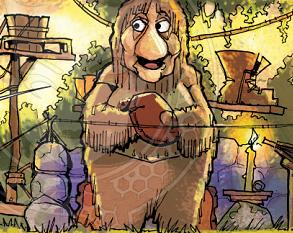 The final short story is entitled “To Catch a Fwaggle”, written by Bryce P. Coleman and illustrated by Michael DiMotta (check out our Q&A with them later this week!). This is a Gorg-centric story, as Junior Gorg sets up an elaborate mouse trap to capture a Fraggle. But what are his sinister plans once he catches the varmint? You’ll have to tune in to find out!

This story is my favorite of the three. It’s very short, but I really can’t think of anything that needs to be expanded. Junior has that perfect mix of eagerness with childlike curiosity. Pa Gorg sounds just how he should, loud and brash with a hint of Foghorn Leghorn. Ma Gorg… does anyone really care about Ma? She has the perfect amount of hideousness. Seriously, that lady has a face that could tenderize ground beef. Most interesting about the story is Michael DiMotta’s art. It’s busy, and at times messy, but that’s exactly how I’ve always seen the Gorg’s garden. The characters almost seem to be moving on the page due to DiMotta’s unique style. But most importantly, the story has a surprise ending, which has a lot of heart. Seems that there are more layers to Junior Gorg than we thought…

And what Fraggle Rock comic book would be complete without an activity page by Katie Cook? Lucky us, this issue actually has two Katie Cook pages: “How to Draw Yourself as a Fraggle” and “How to Make a Radish Stamp”. Now if Katie could only teach us how to turn our Fraggle portraits into radish stamps… well, maybe we’ll save that for another issue.

Now that we can step back and read all of the Fraggle Rock comics at once, I have to say that I’m really blown away by the work from all of the writers and illustrators at Archaia Comics. We’ve been treated to some stories that feel like they were pulled straight from the TV show, some with a lot of heart, and some with a belly laugh or two. We were given the gift of variety, with so many talented people given the opportunity to show off their chops in just a few short comics. Well done, Archaia, and I can’t wait to see what comes next.

Speaking of which, we have an exclusive announcement to make regarding the future of the Fraggle Rock comic book. Managing Editor Tim Beedle revealed to us that production on volume 2 is under way and will begin this October to coincide with the debut of Fraggle Rock (the TV show, silly!) on the new Hub TV network. Tim Beedle let slip a few more details, including some of the writers and artists, in our Q&A which will be posted here later this week. 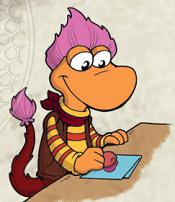 Click here to be vewwy quiet (I’m hunting Fwaggles) on the ToughPigs forum!