I like a good wedding, and I like a wedding even more when I’m in the party. Next week I’m fortunate enough to be the Best Man for my best friend Matt. Some of you might remember Matt from his stellar work on The Muppet Christmas Commentary. Or maybe that story about when I went to Sesame Street in 2008. But probably not.

I’ve been Best Man before for my friend Sean 5 years ago, and it’s a role I take very seriously. My job is to ensure the bride and groom have the best day possible, no matter what it takes. I’ll gladly go and question randoms walking on the property if it means the bride feels safe (it was the photographer’s husband admiring the gardens as he waited to pick her up). It also means I get to write a speech, which is always fun. Gimme a microphone and 5 minutes of the spotlight and I’m a happy lil boy. Fun fact: My speech at Sean’s concluded with a video Elmo had shot for them when I interviewed him earlier that year. I was unable to secure a Muppet this time. Crazy Harry stopped responding to my calls.

It’s had me thinking a lot lately about what it takes to be a Best Man, and because I think about Muppets too much I was trying to decide who the best Muppet would be in that role. Sure, Kermit would be great, but he’s a little boring for that position. Gonzo would likely have everyone maimed during the bachelor party, so he’s out. Scooter would more likely be a great Maid of Honor. There’s really only one man for the job; Fozzie Bear. He’s got all the traits necessary.

Responsibility:
Though he doesn’t always succeed, Fozzie just wants to do what’s right and to help out wherever he can. While he isn’t typically ‘responsible’, he isn’t actively ‘irresponsible’. Fozzie will take charge, do what’s right, no matter who it may injure in the process.

In the Nancy Walker episode of The Muppet Show Fozzie takes charge due to an ill Kermit.  Even as things go wrong with holes in walls and failing lights and even a departing audience, Fozzie takes the lead despite his misgivings and still manages to put on one hell of a show.  That’s the type of person I aspire to be in my role as Best Man.  Even if the wedding goes pear-shaped, it’s my role to lead the day in the right direction.

There are also the scenes in the Roy Clark episode where, albeit due to Fozzie’s incompetence, he has to run the entire behind the scenes of the show, including putting out a possibly out of control fire!  Putting out fires while the show goes on around him? If that isn’t the job of a Best Man, I don’t know what is!

Trustworthy
Despite not always being the most reliable, you’d have to agree that Fozzie is the most trustworthy Muppet.  Whether he likes it or not, Fozzie shows up and does what he has promised to do, and will give it everything he has.  That’s why Kermit left Fozzie in charge inb the Nancy Walker episode – sure, he knew the show wasn’t going to be smooth sailing, but he knew that Fozzie could get the job done.  Kermit trusts Fozzie because Fozzie trusts himself, even if sometimes he shouldn’t.

Heck, just last year Joe Hennes discussed the fact that ‘Trust Me’ is the forgotten catchphrase of The Muppets, and a large majority of those were said by Fozzie himself!  I’m proud that Matt trusts me to be there for him throughout the wedding, to do whatever is needed of me.  Need me to get a rubber chicken for your Aunt Gladys who runs the cafeteria in a theater? I’ll be there.

Compassionate
This one is a no-brainer.  Fozzie is the most compassionate Muppet by an absolute long shot.  Maybe Walter scoots in at a distant second, but it’s all about the Bear.  That dude wears his heart on his sleeve, which is difficult when he doesn’t even wear a shirt!  Recently I interviewed long time Muppet writer Jim Lewis, who during that interview said; Aside from Kermit, (Fozzie)’s the heart of The Muppets.  You know, you watch any of the movies or shows, he’s the one when Kermit’s at his lowest point, it’s Fozzie who says ‘I believe in you, that’s why they continue along.

It’s absolutely true!  Fozzie wants you to believe in you as much as he believes in you.  He’s empathetic and vulnerable and has only your best interests at heart, which is the signal of a magnificent friend.

Outgoing
Perhaps my most significant part of the night will be my Best Man speech, which has been written and still does not contain a Muppet.  I’ve attempted to throw in some gags, but man, I wish I had the confidence Fozzie has that this is going to go well.  Fozzie will die on stage and he’ll just barrel through, even as the mean old dudes in the balcony heckle him.  If my jokes bomb next week I may never come out of hiding.  So, I must take a leaf out of the book of Fozzie Bear, and I must do my act whether it goes well or not!  Luckily I can fake confidence when it’s called for.  Because I’m outgoing, just as Fozzie is.  Fozzie will put himself in situations where he’s the center of attention, or at least in the limelight in some capacity, even if that confidence is maybe sometimes unearned.  Maybe it’s all in the neck-a-tie.  I’m gonna call Matt, see if it’s too late to go with the pink dots…

Click here to put out fires on the ToughPigs forum! 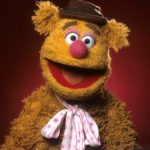 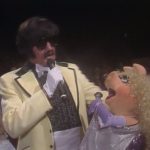 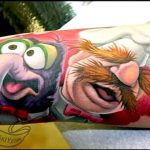 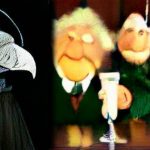