A few days ago Sesame Street uploaded a video entitled ‘Two Heroic Super Stories‘, featuring 2 hero based Street Stories.  Included in this video is Episode 4192 ‘Y A Quest? Y Not!‘ from Season 40.  This episode holds a very dear place in my heart, as this was the episode they were filming when I visited the set in 2008.

Below you will see an article I wrote on my personal blog in September last year about that visit.  The piece explains things that any Muppet fan would know, but still describes these things for those who have no idea.

It’s a question that has baffled mankind through the ages. For decades now millions have people have heard the question, but only a select few have made the effort to answer it…

No, not ‘What is the meaning of life?’. Not ‘What is the true origin of this universe?’ No. The question is far more important than these trivial matters…

Can you tell me how to get to Sesame Street?

In 2008 I went overseas to New York City with my friends Sean and Matt. We had a great time. We did touristy stuff, like the Statue of Liberty (cold) and the Empire State Building (terrible). We saw Broadway shows like Avenue Q (awesome) and Mary Poppins (okay – well made).
On December 17th 2008, Matt and I were about to walk Sean to some show we weren’t going to see. As we got up to go, Sean asked me “What are we doing tomorrow?”. That was when we had planned on heading downtown. “Why?” I wondered.
Sean had a sly smile. “Nah” he said. “We’re going to Sesame Street”.

My reaction was one that I had never had before, nor have ever had since.
I just stood there in bewilderement. I would be, in less than 24 hours, standing on what I considered to be the figurehead of my childhood.
For the first time in my life I was literally speechless.

I didn’t say a word as we waked with Sean up to 46th Street from our hotel on 7th Avenue. Finally, after about 20 minutes, I apologized. I apologized for not saying ‘Thank you for setting this up’, for not seeming at all grateful. But Sean didn’t mind, because the lack of response was enough. He could tell I was in shock.

The plan was to meet Muppeteer Matt Vogel at 2pm at the Kaufman Astoria Studios in Queens, where the set is. Vogel is an incredible performer, who you may have seen as Constantine in Muppets Most Wanted. He’s also taken over most of Jerry Nelsons characters since his death, like The Count, Floyd Pepper and Lew Zealand.
We spoke to the girl behind the counter at the hotel, who told us to allow an hour for the subway trip. This turned out to be completely inaccurate, and we got to the studio in 15 minutes.

We sat in the foyer with a 45 minute wait. We were given Visitors passes, and settled in. Every so often I’d see a Muppeteer walk in from their lunch break and head for the elevator. A limo pulled up at one stage and everyone clamored to see who it was. The receptionist was 100% sure it was a celebrity who was there for Sesame Street. It turned out to be a young girl there with the help of the Make-A-Wish Foundation. We wouldn’t see the last of her. That wasn’t meant to sound menacing.

A lovely young assistant came and grabbed us, and took us up the elevator and in to the corridors of the studio. We saw the dressing room of Caroll Spinney (Big Bird), and met Nitya Vidyasagar (Leela). We walked past the green room and I had my first encounter with a Muppet. And it was rather frightening. In that room was Big Birds legs.

We went to a door with a red light flashing. This meant that they were currently filming, so we couldn’t enter yet. After a few moments the light went off, and the assistant opened the door. We entered and rounded the corner…

The first thing we saw was Big Bird’s nest. It was enormous. The details around it were incredible. I was extremely excited to see the drawing of Mr Hooper, made famous in the segment where Big Bird learns of Mr Hoopers death.

I took some photos, then we went around the wall of doors and there it was. Sesame Street. The stoop, Hoopers Store, The Laundromat. And most excitedly, there was Elmo, Abby Cadabby and Telly Monster, dressed like Knights.  They were joined by the Letter Y, because of course they were.  They were the Y Knights.

We watched them film a song.  The studio had monitors so you could see what the camera saw.  I caught myself watching the monitor, and thought “I can watch this whenever, if I turn my head I’ll see it live”.  It was incredible.  Kevin Clash (Elmo, although no longer), Marty Robinson (Telly) and Leslie Carrara-Rudolph (Abby) did the scene, and Kevin’s head came in to shot, so they reset and did it again.  It amazes me every time I see a blooper reel that the performers never break character, not even in between shots. Elmo yelled at Kevin, and they began again.

Once they finished, there was a pause in filming, and I later found out that it’s because we were there.  You see, no matter who comes to the set, the cast and crew take 10-15 minutes from filming to make that guest feel special.  They began to set up the next shot, and from a few feet away we hear “That looks like some Australians”.  Matt Vogel shook our hands and welcomed us.  I was memorized.  We had a brief chat about the Muppet special ‘Letters to Santa’ that had premiered the previous night, and then he asked if we’d had our photo taken inside Oscar’s trashcan yet.  They had moved the prop, so unfortunately we couldn’t do it.  So instead, Vogel said, why don’t we get a photo with Oscar…  OKAY

Even though he isn’t one of Vogel’s characters, he still became Oscar.  When the awesome Muppeteer Paul McGinnis took the photo and said “Say cheese!” Oscar immediately responded with “I hate cheese.  Unless it’s moudly.  Heh heh heh”.

After this, Vogel asked if there were any particular characters we’d like to meet.  Before I could think I blurted out ‘Ernie and Bert!’.  Vogel smiled and took off, telling us to take a look in Hoopers Store while we waited.  So we did.  The details on some of the products were hilarious.  And in the fridge was real milk, which was months past its use by date.  I couldn’t help but get a photo behind the counter, like I was the newest employee.

Vogel came back in, and beside him was Eric Jacobson, the performer of Grover, Miss Piggy, Fozzie Bear and Sam the Eagle.  Another character he performs is Bert.  And slung over his arm was Bert, who was far bigger than I thought he’d be.  Vogel introduced us, and then Bert came alive.  He apologized that Ernie couldn’t be with us, as he was in the tubby with Rubber Ducky.  But instead The Count would join us, on the arm of Vogel. Now, we were some of the first people to hear Vogel as The Count, as Jerry Nelson was still voicing him at that point.  I knew back then that he was the perfect choice to take on the character.  We chatted to Bert, who made fun of Ernie for being fat, and then Paul grabbed the camera to take a photo.  Bert asked what mega-pixel the camera was.  “8” replied Paul.  Bert laughed.  “THAT’S MY FAVORITE NUMBER OF MEGA-PIXELS!”

We took a few photos, and this one is by far my favorite photo of that day.  We look like characters from a sitcom.  A sitcom I would totally watch!

Vogel then called over Kevin Clash, who eagerly shook our hands, and was excited to talk about Elmo’s appearances on Rove.  He seemed very relieved when we assured him that they were hands down the best Muppet appearances on any talk show, a sentiment I still completely believe.  Then, out came a fuzzy little red guy.

I hugged Elmo, because of course I did, and then Elmo looked at us and said “You’re all gonna get wasted this weekend!”  Then he pointed to me.  “Especially you!”  I told him that in fact, no, we would not be, as we were only 19, and therefore couldn’t drink in the States.  A puppet wrangler took Elmo, and Kevin asked me what age we could drink in Australia.  I told him 18.  He looked confused.  He asked ‘What age can you drive on your own?’  I told him 18.  He grinned.  “So, you’re telling me that you guys can legally drink on the same day you can legally drive?”  The irony had never occurred to me.  When I nodded, Kevin walked off, laughing hysterically AS ELMO.  Hilarious.

Then came in the little Make-A-Wish girl from earlier.  I have no idea where she could have been, as we’d been hanging around for at least a good half hour at this point.  Of course the Muppeteers went off to hang out with her, as they should, and we had a chance to look around the set.  Sitting on a table near a sewing machine was Super Grover.  That was a weird moment.  I also got this great photo in front of the stoop.

We then sat down on the stoop, me next to Eric (!), and we watched Kevin film a video with the Make-A-Wish girl.  It was awesome to watch.  The girl couldn’t really say much, so Elmo just hugged and kissed her.  The girl was in a wheelchair, and the video ended with Elmo jumping on the chair and demanding a ride back to the girls home.  It’s such a shame that Kevin’s no longer with the show, and the awful circumstances that proceeded his resignation.  This is a guy who had a small red puppet thrown at him by a frustrated Richard Hunt and turned it in to a world wide phenomenon.

They got back to filming, and we sat on the stoop as they filmed scenes with Gina in the vet clinic.  Again I found myself watching the monitor, and had to remind myself that it was happening live literally 3 meters away.

After a while (we’d been there for around 90 minutes, if not longer) we felt we’d outstayed our welcome, and we took off.

I’ve written this over 6 years later, and it’s amazing how much I still remember from that day.  On December 18th, I should be celebrating my sisters birthday, but I always take a moment to take a look back at that day.  So yes, I can tell you how to get to Sesame Street.  Now how do I get back there?

Thanks to Matt Vogel, Paul McGinnis, Kevin Clash and Eric Jacobson for making that day what it was.  And thanks to Sean Bryan for setting it all up. 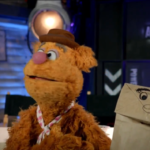 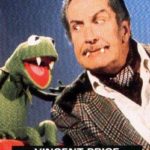 We Are All Earthlings