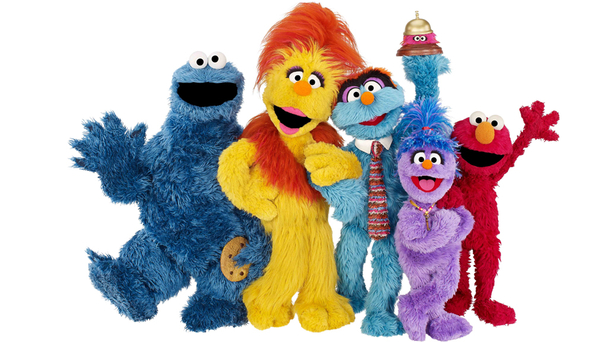 That British Sesame Street spinoff project we heard about back in October has begun production at the MediaCity UK studio in Manchester, England.  As announced by Sesame Workshop today, The Furchester Hotel will produce 52 eleven-minute episodes to be aired on CBeebies, the BBC’s children’s network.

More info from the press release:

The Furchester Hotel, commissioned for CBeebies by Controller Kay Benbow, is about a close-knit family of cheerfully incompetent Muppet monsters who own and operate an ‘almost’ world-class hotel. The proprietors are Funella Furchester, the welcoming monster owner, her loving husband, Furgus Fuzz, and their daughter, the unflappable Phoebe Furchester-Fuzz. The Furchester family is joined at the hotel by Elmo, Phoebe’s cousin who is on an extended visit, and Cookie Monster, who has landed his dream job as room service and dining-room waiter.

Elmo and Cookie Monster are played by Sesame Street puppeteers Ryan Dillon and David Rudman respectively and the head writer for the series is Belinda Ward.

“Harvey P. Dull!”  Now there’s a great name.  Looking at that cast photo above, I can’t help but wonder if all the guests at the hotel will be monsters, or if there will be the occasional human or duck or bear or whatever.

Oh, and Louise Gold is playing a main character!  With this show and the return of Annie Sue in Muppets Most Wanted, it’s a good time to be a fan of Louise Gold, puppeteer.  Also notable: I think this is the first time Muppet performer Ryan Dillon has been officially credited by Sesame Workshop as performing Elmo, although keen-eared Muppet fans picked up on the recast some time ago.

The show is set to launch this coming autumn, so if you’re in the UK, keep an eye out.  And if you’re anywhere else, keep your fingers crossed for some episodes to pop up on DVD or online.