Elmo Loves You, And He’ll Love You Even More If You Buy His Documentary on DVD 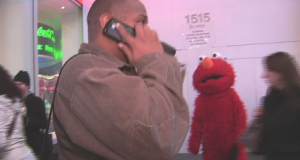 Have you seen the Kevin Clash documentary Being Elmo yet?  If not — well, first of all, what have you been waiting for?  It was in theaters, it aired on PBS, and it’s now available to watch instantly on Netflix. But if you still haven’t seen it yet, why not buy it on DVD?

For one thing, you’ll get the movie. As Tough Pigs’ own Chase Beecher told us in his report from the Sundance festival way before anyone else had seen it, Being Elmo is a lovely film for both Muppet-lovers and casual Sesame Street-likers.  Directed by Constance Marks, the film tells the story of Kevin Clash‘s rise from a young puppet enthusiast to the performer of one of the most famous puppets in history. There are clips from various Muppet and Sesame productions, both on-camera and behind-the-scenes. There are interviews with Kevin Clash, his family, and colleagues such as Frank Oz, Marty Robinson, and Fran Brill.  And there’s a really cool thing they do where they take old photos and make them look like they have three-dimensional depth. 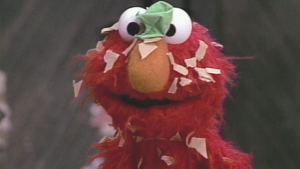 Most Sesame fans — especially those who read My Life As a Furry Red Monster — already know the basic points of Kevin’s Muppet life.  But while that book was written from Kevin’s point of view, the film shows us the larger picture of his career and the Elmo phenomenon, as told by people who are not Kevin Clash.  So you hear about his early puppet work on local TV, but you also get to hear from the TV producers and personalities he was working with.  And you hear the familiar legend of how Richard Hunt got sick of playing Elmo and threw the puppet at Kevin, but you also get to hear about it from Marty Robinson, who was in the room at the time… and you even get to see a few snippets of Richard’s Elmo from the show (“Elmo squeak balloon TOO much!  Heh heh heh.”)

So yeah, the movie’s good, and that’s one reason to buy the DVD.  The other cool thing about owning the DVD is that you’ll be able to share the movie with all your friends at any time, even if the internet goes out.  And Being Elmo is a good one to show your friends.  Believe it or not, there are some humans who don’t know how Kevin Clash became a Muppeteer and took over Elmo, so for those folks it’s educational, and isn’t that what Sesame Street is all about? 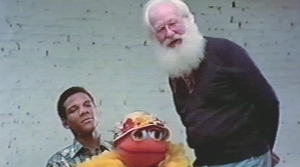 Aside from being informative, it’s also pretty dang inspirational… Honestly, there’s not much in the way of drama or tragedy or overcoming hardships in Kevin’s story — although it does cover the death of Jim Henson, a tear-inducing moment in the film, to be sure.  But the story of Being Elmo is all about being passionate about something and working really hard to achieve it.  And just seeing the effect Elmo has on children is enough to make all but the stoniest Elmo-hatas melt a little. (Does stone melt? Was that a mixed metaphor?)

So there’s another reason to buy Being Elmo on DVD.  But in addition to the content of the film, you’ll also get some nice special features, including: 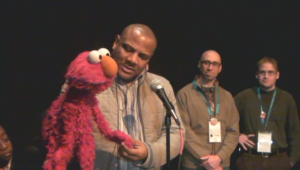 Sundance Premiere Q&A: Kevin answers audience questions at a film festival screening, including queries about his parents (If you’ve seen the film, you know Kevin’s mom steals the show); the “split consciousness” that comes from playing the same character so often; and Tau Bennett, Kevin’s young protege who appears in the film. Kevin approaches the Q&A with a duffel bag, and you can guess what’s — or who — is in it.  All Elmo has to do is say “Elmo loves you!” to get the audience in the palm of his hand.  Although it gets a pretty good reaction when he says “Elmo has a butt,” too.

Some Thoughts From the Filmmakers: There are no commentaries on this disc, but this extra provides plenty of good information on how the film came to be.  Among other things, it answers the question of where the remarkable old footage of Kevin as a teenage puppeteer making puppets and meeting with Kermit Love came from.  There’s a moment where the editor admits he didn’t appreciate Elmo before the film, but seeing Kevin and Elmo in person convinced him otherwise, a sentiment shared by many who have seen the finished film.  This feature also has info on a few things that had to be cut from the movie, and the reason Bill Barretta brought his interview session to a screeching halt to call Kevin on the phone. 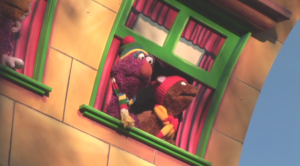 Tau Bennett performs in the Macy’s Thanksgiving Day Parade: This is a delightful little video that will make you simultaneously happy for and jealous of Tau Bennett, whose association with Kevin Clash led to an opportunity to perform Baby Bear on the Sesame Street float in the Macy’s Thanksgiving Day Parade.  Tau seems appropriately overwhelmed as he meets everyone from the Sesame gang and plays with Baby Bear alongside Marty Robinson as Telly.  It’s also a cool look at how they make the parade happen… It’s not often you get to see inside a Macy’s float. (It’s small.)

Interview with John Tartaglia: I don’t think any of Tartaglia’s interview spots made it into the final cut, but it’s fun to hear his enthusiasm as he talks about his own Muppet fandom, and how Kevin Clash helped him get his big break on Sesame Street. Apparently, when it comes to puppetry, Kevin is “the god of manipulation.”

And there you have it. There are more reasons to buy Being Elmo on DVD than Elmo himself could count on both hands. Especially because he only has eight fingers.

Click here to squeak balloon too much on the Tough Pigs forum!