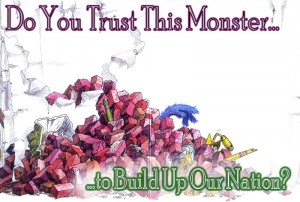 “Monster.” We all know what images that word conjures.

My colleague Mr. Hennes urges you to vote for two candidates who share this terror-inducing last name, and who represent an equally nightmarish future. He would have you believe that these creatures are misunderstood. To that I say no – they just misunderstand everything that happens around them. This makes them completely unfit for the task of leading this nation and, indeed, for any task.

I will cede that Grover is very skilled at creating jobs – for himself, but never for others. That list of positions he’s held is no accident. Grover wants to be the only working American, and he’ll dedicate all of the White House’s resources to searching near and far for citizens whose jobs he can steal. He’ll try to frame it as helpful or cute, telling people to relax while he handles all of the work. By the time everyone has relaxed for four straight years, the USA will have ceased to function. 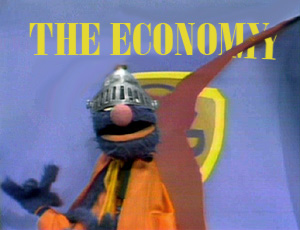 You see, Grover has proven time and again that padding his resume is his only skill. As a waiter, he has never delivered an order properly. As a superhero, he has never successfully rescued a citizen. As a sheriff, he hasn’t been able to navigate around a fence without help from his horse. Well, Fred the Horse won’t be in the White House to guide him around the fence of foreign diplomacy. He’ll have to rely on his wits alone. So vote for Grover, and see how those wits fare against North Korea.

Not only is Grover terrible at all of these jobs, he never admits his failure. He just keeps plugging along, making life worse for everyone he comes in contact with. In his many years as a “helpful” employee, Grover has shown a shocking inability to assess situations. He always offers help to people who don’t need it – children, animals, grumpy fellows with mustaches – and continues with his non-assistance long after they’ve solved problems on their own. With President Grover constantly standing by to offer aid, those solutions will never come.

Grover thinks it’s impressive when he manages to put his shoes on the right feet. When he makes mistakes as President – and you can be certain he’ll make thousands – he won’t apologize. He’ll grin like an idiot, boast about how adorable he is, and then shuffle out of the press conference spouting nonsense like “Wubba Wubba!” If being President is all about silly catchphrases, then yeah – he’s the man for the job.

In many ways, Grover’s running mate Cookie Monster is even worse. He’s a loose cannon who can’t even stay focused on what he’s currently eating, let alone on keeping the country safe. He has a one-track mind, dedicated only to satisfying his unstoppable appetite. To him, C is always for “Cookie.” To us, C is for “Can’t be counted on.” 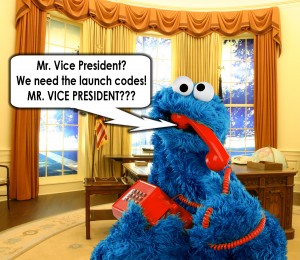 Perhaps due to think short attention span, his platform is a total fraud. For his first thirty-five years in the public eye, Cookie Monster supported the consumption of junk food. Then he changed his tune, becoming a staunch public health advocate, releasing the statement “Me love to eat . . . FRUIT!!” But it was just a grab for publicity, and Cookie Monster immediately went back to eating cookies as often as possible. As Vice President, he will continue saying anything that makes him look good and eating anything that keeps his belly full.

Scariest of all is the campaign’s insidious undertones of blue supremacy. While their opponent Gonzo is also blue, he chose a brown running mate because he appreciates people for who they are on the inside. Grover and Cookie Monster, on the other hand, care only about fur color. They look down their noses at non-blues, asking “Don’t you wish you were fuzzy and blue?” In Monster-era America, it’ll be a hard time for anyone who isn’t “Fuzzy and blue, all over. Fuzzy and blue, like Grover.”

The choice is clear. Gonzo and Rizzo will deliver America through a new golden age. Grover can’t even deliver a cheeseburger successfully. Even if he could, his running mate would just eat it before it arrived. Don’t let these monsters destroy America like they’ve destroyed so much property and so many innocent lives. 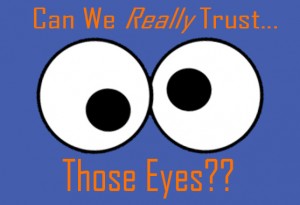 It’s time to cast your vote!  Click here to vote for Gonzo/Rizzo, Grover/Cookie Monster, or your choice for a write-in candidate!  The polls will stay open until 9:00pm EST on Tuesday, November 6, the same time as the polls for the actual Presidential election!  We’ll post the results as soon as the election has been called for either candidate.

Click here to mistake the White House telephone for two round, delicious cuppy-cakes on the Tough Pigs Forum!