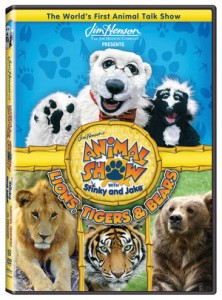 We all got pretty excited back in April when Song of the Cloud Forest came out on DVD. We were so excited that we kind of overlooked another nifty Henson DVD release: The Animal Show. No, it’s not a sitcom starring the drummer from the Electric Mayhem, it’s a Henson series from the 90s starring a menagerie of Muppet critters. The DVD is called Lions, Tigers & Bears, and it contains 5 episodes of what the front cover calls “The World’s First Animal Talk Show.” (I guess they’re not counting the brief period in the 60s when Lassie guest-hosted The Tonight Show.)

I had never really seen the show — whose full title is actually Jim Henson’s Animal Show with Stinky and Jake — during its original 1994-97 run, because I had to go to school in those days. I would have had more fun staying home and watching the Animal Show, though, because it’s not only very informative, it’s also a lot more entertaining at teaching about animals than my boring biology teacher Mr. Green. Mr. Green! Honestly, even his name was boring. 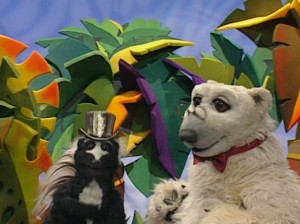 One of the first things you notice about the show is how pretty the puppets are. They must have spent a pretty huge chunk of the budget on building the various zebras, beetles, and chimpanzees, and they got their money’s worth. The show is hosted by Jake the polar bear and Stinky the skunk, performed by Steve Whitmire and Dave Goelz, respectively, with their usual rapport. The show is designed to educate, but there are enough talented puppeteers and behind-the-scenes people (like Henson veterans Jocelyn Stevenson, Peter Harris, and Jim Lewis) to prevent it from getting boring.

Every show has the same segments: That’s Amazing (some editions are more amazing than others; I think one of them was something like “Elephants eat a lot!”), two animal guest spots, Baby Talk (with Muppet performers doing funny voices over film of baby animals and not being educational at all), some songs, some quizzes, the Animal Award, and Habitat Time.

Stinky and Jake and their co-hosts are fun to watch, and all the animal guests have personality — and often, funny accents — but the talk show format also means we never really come to know and love the characters the way we do with Fraggles or Bears in Big Blue Houses. There are no stories, so there’s no character development… but that doesn’t mean it’s not fun anyway. And did I mention it’s educational? Well, it is. I learned a lot. In fact, here’s my list of Things I Learned from the Animal Show: