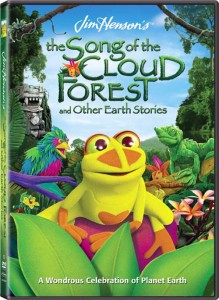 For those of you who, like me, only had memories of this special from compilations in Muppet documentaries, Cloud Forest is about Milton the golden toad, who is possibly the last of his species. Bummer. He spends the better part of five years sitting in the same tree and singing the same mating call, probably because internet dating hadn’t been invented yet. Meanwhile, the strikingly familiar “uprights” all but hand-deliver a female golden toad to Milton’s doorstep while the colorful cast of creatures dole out some heavy-handed lessons about our environment.

The most fascinating part about this special has got to be the special effects. In 1989, green screen technology still wasn’t being used to this scale, so this production is another case of Jim Henson taking the latest tech, spanking it, and showing the rest of Hollywood how it’s done. According to the making-of featurette below, this was the first time they filmed an entire half-hour production in front of an all-black background. Just think, The Song of the Cloud Forest may have paved the way for movies like Sin City, The Phantom Menace, and Avatar, long before it was tacky! (Of course, there are many more similarities between this and Avatar, the most obvious being their use of the Papyrus font on the DVD cover. And I guess the environmental message or whatever.)

Speaking of the video-that-you-just-watched, this is the glaring omission of the DVD, which shouldn’t be surprising to any of us anymore: There are no special features related to The Song of the Cloud Forest. Obviously, behind-the-scenes footage from the special exists, and most of the people involved would be available for interviews or commentaries. Just think of how great it would’ve been to hear Dave Goelz and Steve Whitmire talk about puppeteering in a production without seeing the background. Or to have Cheryl Henson explain how they created the rainforest on a computer screen in the late 80s. Once again, the ball is dropped in favor of a bare-bones DVD. But my complaints stop there, since Cloud Forest appears without any edits (unless you count editing out the first half of The Jim Henson Hour), as well as two episodes of The Animal Show and one episode of Fraggle Rock. That brings us to over an hour of bonus episodes for one 22-minute special. It almost seems like the DVD should be billed the other way around.

Another fun bit to watch is the relationship between Dave Goelz, who plays Milton the golden toad, and Steve Whitmire, who plays Wilf the red howler monkey. The two share a lot of screen time, and I keep flashing back to Boober and Wembley, Rugby and Mew, Gonzo and Rizzo, Statler and Waldorf, Bunsen and Beaker, and a heck of a lot more. Even the special features get those two cats in the same room to perform Stinky the skunk and Jake the polar bear on The Animal Show. Steve and Dave are a match made in Muppet heaven, and something deep inside of me always sings a little happy song when they get to share scenes together. 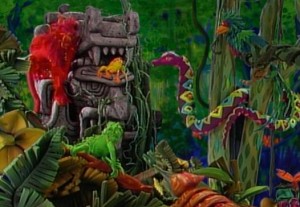 The positive messages in this special are pretty heavy, though I can’t say I fully understood them all. Milton’s extinction scare is easy to get, especially when you add in the whole “afraid of dying alone” thing, which I’m sure a few of us can relate to. Ralph Robin gives a chilling explanation for why the uprights want to destroy the rainforest: Because they want to eat it and all of its inhabitants! But wait, aren’t we the “uprights”? I don’t know about you, but I have no intentions of eating a redwood or a howler monkey (no matter how delicious I hear they are). Yeah, I know “eating the rainforest” is an analogy, but that extra step of logic made it a little hard to grasp onto Ralph’s warning and take it with any seriousness at all. Speaking of the uprights, the animals are all shown as being afraid of them, which starts to build them up as the antagonists of our story. But when we hear their plans, they sound like scientists whose only intentions are to ensure the longevity of the golden toads. So in the end, I’m not quite sure who to root for. Especially since it seems like everyone’s got the same goal in mind. Except for Ralph Robin, whose goal seems to be fear mongering.

Because The Song of the Cloud Forest is yet another well-produced classic Henson production (and this is what we do with all well-produced classic Henson productions), I’m giving this DVD the ToughPigs stamp of approval. The special has impressive special effects, strong messages, colorful characters, and fantastic performances. Plus, it’s a great example of the type of production Jim Henson was so interested in making toward the end of his life. Many thanks to The Jim Henson Company and Lionsgate Entertainment for giving us the opportunity to experience such a wonderful piece of television and Muppet history again! 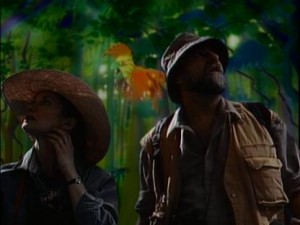 Click here to propagate our species on the ToughPigs forum!