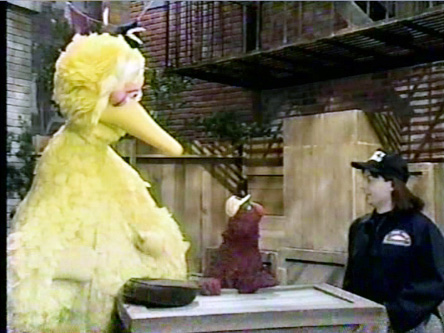 Now that we’re officially into the second half of Sesame Street‘s first 50 years (wow, what a weird and imposing thing to say), we’re starting to get into the era when our ToughPigs writing staff isn’t quite as familiar with the episodes.  As the years go on, the focus on entertainment is starting to decline as the focus on curriculum is on the rise.  Is it possible that there won’t be anything to truly love as a grown-up watching this preschool series??

Of course, that’s a ridiculous fear to have, as evidenced by season 26’s Telly’s Town episode.

Picture it!  The year is 1995, and Wayne’s World is the coolest thing ever.  Both of its hit films were etched into the public consciousness, and Mike Myers and Dana Carvey skyrocketed to become cultural icons.  Phrases like “party on” and “excellent” returned to our regular vocabulary, as well as lesser-used turns of phrases like “monkeys might fly out of my butt” and “SCHWING!”

Meanwhile, Sesame Street decided to grab the bull by the monogrammed baseball cap and get in on the Wayne’s World craze.  In a Joey Mazzarino-penned script, Telly hosts his own cable access show (sort of… he’s just talking to the camera as always) called “Telly’s Town”.  Telly is both perfect and imperfect for this role – his history as “the Television Monster” makes him the ideal candidate to host his own TV show, but his natural neurotic tendencies seem contradictory to Wayne’s confidence and likability.

Telly would probably be better suited as Garth, but that role goes to Big Bird, who Telly takes under his wing to teach him phrases like “excellent” and how to make air guitar noises. 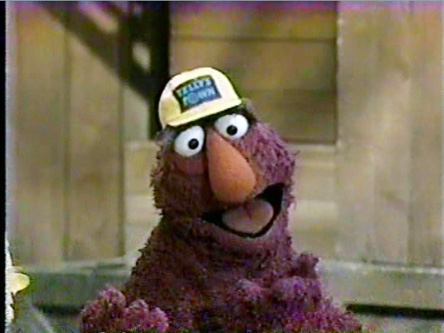 The episode also does what I secretly want every Sesame Street episode from this era to do.  I just want the Street scenes to act as a vehicle for some fun segments.  And Telly’s Town does that expertly, as it doubles as a 90s-era MTV show, with Telly and Big Bird introducing music videos.  There’s some great ones in this episode too, including Fur Jam’s “Don’t Waste the Water” and The Counting Crows (not the band, but actual crows who count) “Count It 1-2-3”.

To drive the Wayne’s World connection home even further, Mike Myers appears in character as Wayne, delivering telegrams to Telly throughout the episode.  It’s great to see that Myers gave his stamp of approval to the Sesame Street spoof, and that he was willing to toss on a wig and t-shirt for a glorified cameo. We were told by a former Sesame intern that Mike Myers was dead tired after having rehearsed for Saturday Night Live late the night before, which might explain his low energy.  Still, what a pro.

In any case, it was a thrill to discover this episode, which was an honest-to-Frog gem.  It was fun and funny, with classic pop culture references, a great celebrity cameo, and an ideal spotlight for the underutilized Telly.  This is mid-90s Sesame Street at its best. 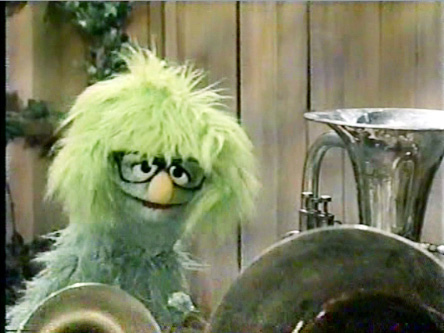 Notable Character Debut: As far as I can tell, there weren’t any huge debuts, so I’ll give it to this green monster who happens to sound and act just like Wayne’s partner Garth Algar.

Notable Character Departure: This is Sesame’s resident tap dancer, Savion’s final season.  But more importantly, this was the last season overseen by Sesame Street’s visionary writer and director Jon Stone before his passing.

MVM (Most Valuable Muppet): Telly, because he is most excellent.

MVH (Most Valuable Human): How about Mr. Handford, who seems to be the main human in a lot of episodes this season? Let’s throw that guy a bone.

Classic Song Debut: It’s not exactly a classic, but I really enjoy Oscar the Grouch’s “I’m Sad Because I’m Happy”. Not only does it make a melody out of one of Oscar’s most famous bits, but the visuals (featuring characters trying to walk in heavy wind) are hilarious.

Curriculum Focus: This season is all about literacy, so everyone spends the entire year reading books and stuff.  The Telly’s Town episode is a bit of a stretch, but they make it work as Wayne makes a point to talk about how he reads his telegrams.

One More Thing: This season contains two episodes featuring Jesse, a teenage kid who woos, then dates Gina.  And then, I guess, Gina kicked him to the curb, because he didn’t come back for season 27.

Okay, One More Thing: Apparently this is the final season to have two letter sponsors per episode until season 38.  Just think of how much the show could’ve accomplished with the funds from double the sponsors!  (I hear the letter D is loaded.)

Click here to party on, Wayne, on the ToughPigs forum!