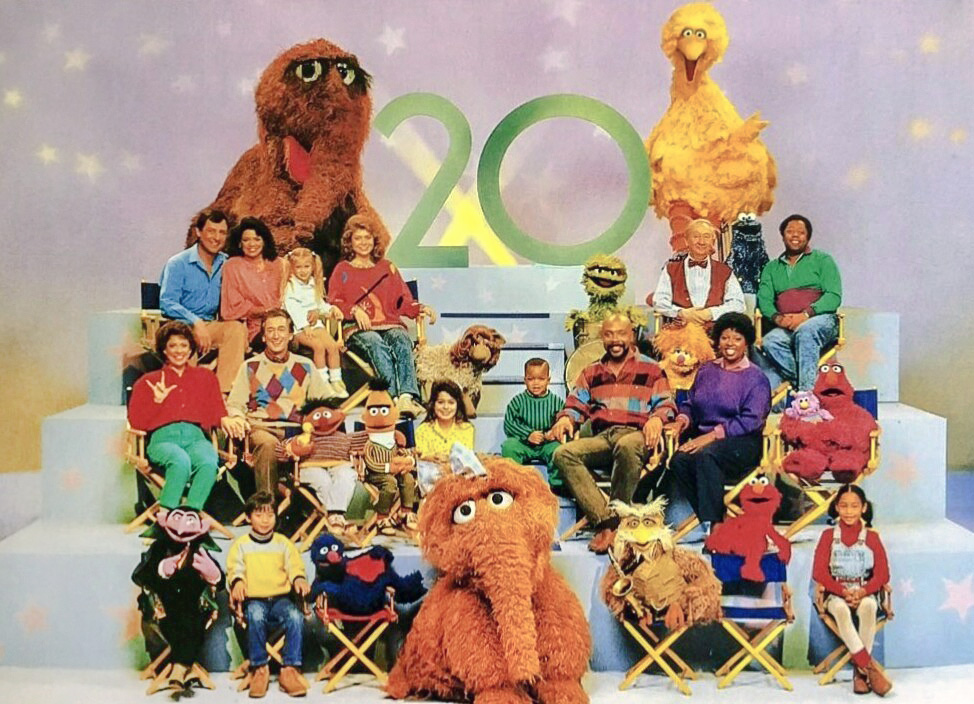 What can I say? I’m a sucker for Sesame Street anniversaries, and with the show marking its twentieth season, it does feel like the show has grown from an experiment to a television phenomenon, and by 1989, it’s become a cultural landmark. The program celebrated its twentieth anniversary with events including a special not on public television stations, but on NBC, a major broadcast network, and their second (second!) exhibition with the Smithsonian. So it’s safe to say that for the coming anniversary, the only thing to do would be to go big. And in season 20, they went big by addressing some of the big questions kids might have about the world around them. With an enhanced focus on science this season, the show teaches kids about the scientific process as well as migration, air, and rain, but that wouldn’t suffice for a big season like season 20. This season, Sesame Street teaches kids about the origin of life itself. 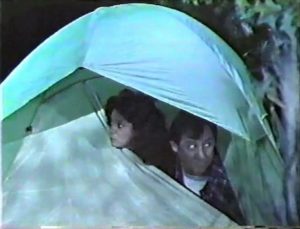 Last season, Luis and Maria fell in love and eventually got married, and this season picks up where they left off. The season starts with a five-episode arc featuring their honeymoon, where they find camping in the Adirondack Mountains isn’t as restful and relaxing as they were hoping for. The newlyweds return to Sesame Street to move in together and reminisce about their wedding, and on February 2nd, 1989, Maria makes a big announcement: she’s pregnant! And despite the fact that the birth episode was only just over three months later, the show worked in plenty of episodes that involved the pregnancy.

I have to give Sesame Street credit where credit is due: sometimes, kids have questions about subjects that are difficult to discuss, even as adults. The easy answer for a children’s show would be to simply avoid discussing them. But sticking to A-B-Cs and 1-2-3s wouldn’t be right for Sesame Street. This was a show designed to teach children in the context of the real world. This is a show that wasn’t afraid to talk about death. This is a show that taught kids that sometimes grownups mess up, too. Avoiding the topic of pregnancy and birth would’ve run counter to everything stood for. 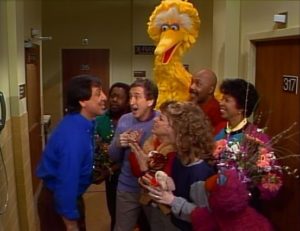 And for what it’s worth, the show handles the issue deftly. Obviously, the mechanics of conception and the childbirth process aren’t discussed, and it does show perhaps the most sanitized, heteronormative conditions of pregnancy (a man and a woman fall in love, get married, and then have children) that wouldn’t raise other, more controversial questions for 1989, but it does take a difficult subject and manage to show a lot of what goes on in a way that young children can understand. We see the doctors’ appointments, the pregnancy cravings, friends and family coming together to help, and the excitement and anxieties that come with being a new parent. And in the final two episodes of the season, we finally get to see the rush to the hospital, and the craziness that can sometimes come with getting the word out that the baby is here. It can be a busy, tense time, and the show didn’t shy away from that. To celebrate twenty years, Sesame Street went big, and there’s nothing bigger than a new life. 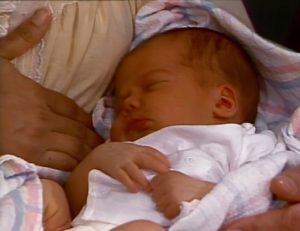 Get ready, folks; you’ll be seeing a lot more of her.

Notable Character Debut: Gabriella, better known as Gabi. But if you read the last four paragraphs, you’d probably know that by now.

Notable Crew Departure: This was also the final season of Sesame Street where Joe Raposo served as music director. Raposo passed away on February 5th, 1989. He’s credited as the music director through the season’s end. Thankfully, his work on the show will be remembered forever. 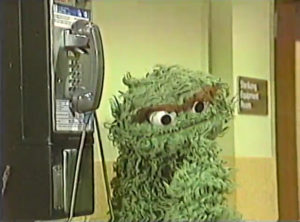 MVM (Most Valuable Muppet): There are three really good choices here. Elmo really comes into his own this season, setting up the monster’s dominant run in the 1990’s. Big Bird plays a big role in the setup to Gabi’s birth, helping out Maria and Luis wherever he can (and whether or not he’s needed). But I think I’ll give the prize to Oscar, who despite his grouchy nature, really steps up in the clutch, lending Luis and Maria the Sloppy Jalopy to take on their honeymoon, and driving the pair to the hospital when Maria goes into labor. (But don’t tell him it’s for doing something nice… I’d hate to give a grouch an existential crisis!)

MVH (Most Valuable Human): From their honeymoon to pregnancy to childbirth, Luis and Maria are the center of a lot of the season, and with good reason.

MVE (Most Valuable Episode): With Gabi’s debut and David’s final appearance, the season finale, Episode 2615, seems like a historic episode of the show.

Other Notable Episodes: Episode 2544, where Maria announces her pregnancy, also contains the first known appearance of a personal favorite sketch, but I’ll talk more about that in a moment. There’s also episode 2588, where Alice Snuffleupagus tries welcoming viewers to Sesame Street by saying “Wigwamm-froo-SMOSSmee-Sreep!” A warm greeting, as only Alice can deliver it.

Classic Sketch Debut: Some popular recurring segments premiered in Season 20, including William Wegman’s films starring Fay Ray, Sally Cruikshank’s animated segments, and Mysterious Theater, hosted by Vincent Twice (Vincent Twice). But one of my all-time favorite Kermit the Frog moments ever also premiered in Sesame Street’s twentieth season: Kermit directing Forgetful Jones in “Oklahoma!” Forgetful Jones is as funny as he’s ever been in this sketch, and it’s got a classic, full-on Kermit the Frog freakout. I’ll be honest: when writing this review, I knew the date it would be published. And on a day like today, I think this is a perfect way to remember Jim Henson: a lesson with laughter. Let’s watch together, shall we?

Classic Song Debut: On the other hand, if you want a cool frog extolling the virtues of a certain joint near the torso, here’s Kermit with the classic “I Love My Elbows.” It’s a catchy, jazzy tune that feels like it could’ve been on Broadway, and a great way to show off Jim’s singing talents. Who knows? Maybe Kermit cut it from Manhattan Melodies?

Curriculum Focus: Science and pregnancy are the focus of Season 20. From sonograms to experiments, kids are learning more about the world around them this season.

Musical Highlight/Best Celebrity Moment: I’m combining these two, because one of the musical highlights of the season comes to us courtesy of two celebrity guest stars: Billy Joel and Marlee Matlin. Joel performs a modified version of his hit song “Just the Way You Are” themed to Oscar the Grouch, while Matlin signs along, to Oscar’s disgust. In another episode, then-New York Yankees star Dave Winfield talks about being proud of being tall with Big Bird. It’s not often you get an Academy Award winner, a Rock and Roll Hall of Famer, and a Baseball Hall of Famer in the same season!

WTF Moment: In Episode 2587, Placido Flamingo produces an opera about The Eency Weency Spider, where the titular character is played by Bob. And yes, he wears a spider costume. And it is glorious. 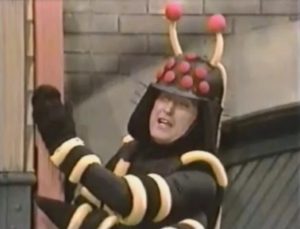 One More Thing: While Maria’s pregnancy is the big over-arching storyline this season, birth is a recurring theme. In episode 2592, Telly is asked to sit on a macaw’s egg for a short while, and eventually, the egg hatches, and in episode 2599, The Amazing Mumford’s duck lays an egg, which hatches by the end of the episode. Something was in the water on Sesame Street that season! (Or some writer had a craving for eggs.) 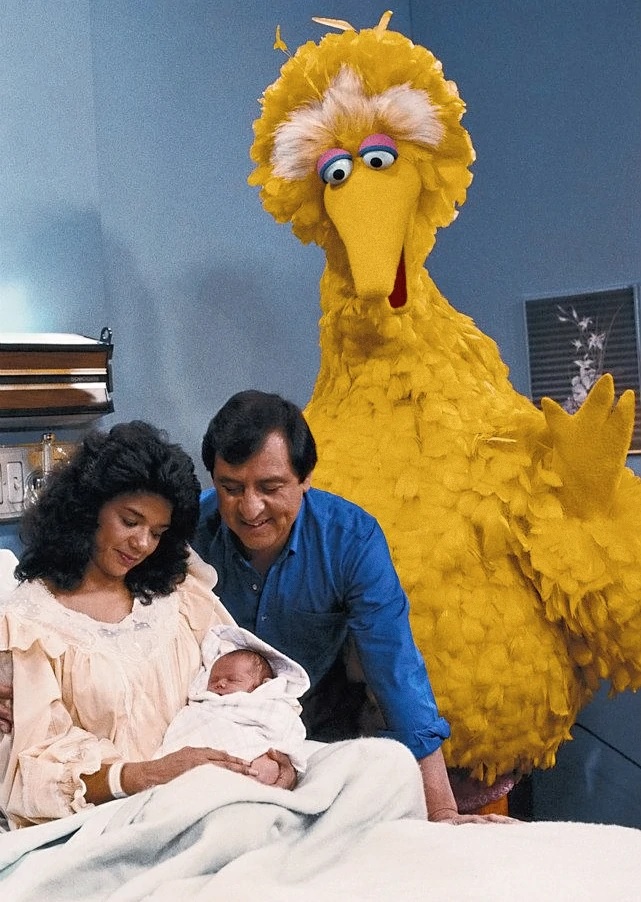