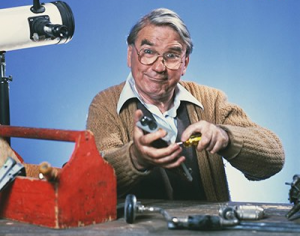 Muppet fans everywhere have been celebrating the life and career of Gerry Parkes since the news of his passing last week.  Parkes, of course, was best known to us as Doc from Fraggle Rock.  As the human link in the chain of co-existence at the heart of the show, Doc was an important character — he even appears onscreen before any Fraggles at the start of every episode.  As we remember Mr. Parkes, it’s the perfect time to watch a bunch of episodes of Fraggle Rock, so with that in mind, I’d like to humbly present my list of Fraggle episodes with exceptional Doc stories. (Note that I’m using the episode numbers found on Muppet Wiki.) 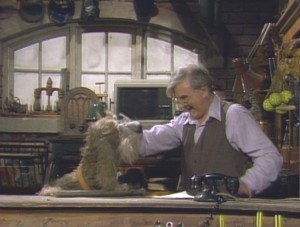 102: Wembley and the Gorgs: The bond between Doc and his dog Sprocket is established early on in this episode.  Doc is thrilled to be named Man of the Year by the North American Society of Tinkerers, but less thrilled when he realizes that going to the convention to accept the award means leaving Sprocket behind.  It’s worth noting that apparently Doc’s on-again, off-again rivalry with Ned Shimmelfinney hadn’t started yet, as he plans to leave Sprocket in Shimmelfinney’s care and tries to persuade Sprocket that the neighbor is a nice guy.

106: The Preachification of Convincing John: It’s impressive how well-defined the Fraggle Rock characters were from the earliest episodes, and Doc is no exception.  When Doc rediscovers his old diary, he also rediscovers an obsession with sewing a button on a fried egg.  Classic Doc!  When his friend Steve asks him on the phone why he wants to do it, Parkes really sells Doc’s belief that that’s the stupidest question in the world. “Maybe to fasten in to the toast so it doesn’t slide off — that’s why!”  Can he do it? SPOILER: Yes, by freezing the egg first.
Yes, by freezing the egg first. 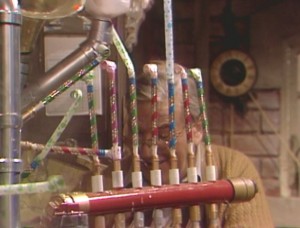 110: Don’t Cry Over Spilt Milk: After finally boarding up that hole in the wall, Doc builds an elaborate musical instrument out of party noisemakers, and he’s so ecstatic about it that he completely misses the fact that there’s a Fraggle trapped in his workshop the whole episode.  I can’t blame him… The invention is pretty amazing.

121: Gobo’s Discovery: Doc’s invention ideas keep getting rejected, so he goes back to his former career, that of a barber.  Sprocket is less than impressed when Doc ends up inventing “whisker wax” for dogs, but I suspect it would sell quite well among pet-owning hipsters of today. 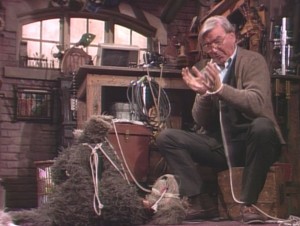 211: The Wizard of Fraggle Rock: Doc gets his hands on an old trunk full of tricks that used to belong to his magician uncle, and tries to show Sprocket an escape trick. What could go wrong?  What could possibly go wrong? Well, it’s a good thing Ned Shimmelfinney lives close enough to come over and set them free.

213: Red’s Club: Sprocket’s application for membership in the Top Dog Club is rejected, so Doc starts the Underdog Club.  He declares Sprocket the president, but soon seizes control of the application restrictions: No dogs that yap, no big dogs… the list of canines that are disqualified from joining the club even includes Rowlf!  Sprocket eventually helps him see the error of his ways, but sadly, we never get to see a meeting of the club. 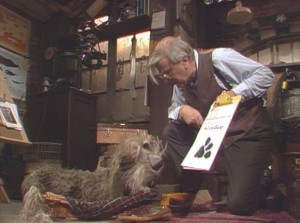 220: A Cave of One’s Own: A major development for Doc’s epic character arc throughout the series! When Doc finds out someone is planning on turning the old captain’s house down the block into a bed & breakfast, he initially hates the idea. He creates a petition, hindered only by the fact that there are just two signatures and one of them is a dog’s. Then he tries to picket the construction, making a sign for Sprocket that reads “GRRRRR!” But when he meets Ms. Ardath, the woman who’s running the new inn, he changes his tune. Doc and Ms. Ardath, sittin’ in a tree…

223: Boober’s Quiet Day: Sprocket has to go to the vet’s office, leaving Doc alone for the day.  What is a man without his dog? Is he less of a man? Is he a man without his best friend? Maybe, but mostly he’s just really bored. 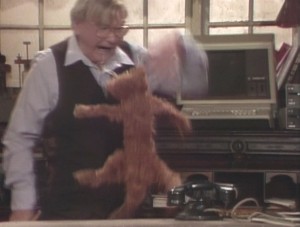 303: Boober and the Glob: Hey, this was the first episode of Fraggle Rock I ever saw! Doc is writing an article about cats, for some reason.  Since when is he a reporter? He needs to do some research, so he asks to borrow Fluffinella from Ned, much to Sprocket’s chagrin… and bodily harm.

305: Blanket of Snow, Blanket of Woe: As Mokey makes more promises than she can keep down in the Rock, Doc finds himself in a similar boat. He told Sprocket they can play “fling and fetch” (Is that what they call “fetch” in Canada?) on the same day he promised Ms. Ardath he’d finish writing a newspaper ad for The Captain’s Inn.  Mad Men‘s intense creative deadline episodes were obviously influenced directly by the scene of Doc ignoring Sprocket while frantically brainstorming taglines.  If you ask me, he’s all too quick to dismiss “When you go out — The Captain’s Inn!” 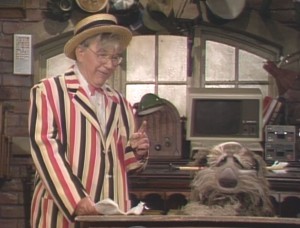 309: Wembley and the Mean Genie: This is one of my favorite Doc stories. Doc wants to be in the inn’s talent show, so he coerces Sprocket into doing a comedy act with him: The Amazing Doc and His Talking Dog Sprocket! “How does sandpaper feel? (Rough!)  What’s on top of a house?  (Roof!) Who was the greatest baseball player of all time? (Ruth!)”  Great material, and I’m 100% sure it would have played in Peoria. The only problem is, the Talking Dog Sprocket kind of hates the whole thing.

310: The Secret Society of Poobahs: Doc thinks it’s ridiculous that Ned has joined an organization called the Royal Society of Chipmunks, until he’s asked to join himself.  One of the cardinal rules of writing is supposed to be “Show, don’t tell,” but the Fraggle Rock writers could count on Gerry Parkes to help them get around that rule constantly. On a regular basis, he runs into the workshop to describe to Sprocket what he’s been doing and seeing, and his delivery is so vivid that we believe it all without getting to witness any of it ourselves. In this episode, he laughs his way through a brief summary of his failed Chipmunk initiation meeting, and his description is all we need. 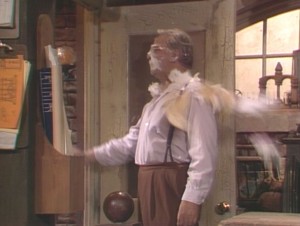 313: Scared Silly: I never realized this when watching the show as a kid, but Doc is an exceptionally good-natured fellow. In this one, he and Ned Shimmelfinney try to one-up each other with a series of pranks (Remember the “Bar Wars” episodes of Cheers? It’s nothing like that), but even when his Home Alone-like setup of booby traps backfires on him, Doc is quick to laugh at himself. What a guy.

316: The Battle of Leaking Roof: When Sprocket gets laryngitis, Doc tries to fill the gap by barking like a dog.  His dog impression is so bad, Sprocket’s laryngitis miraculously cures itself. 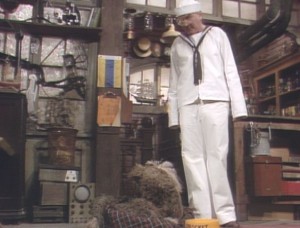 403: Sidebottom Blues: As the series goes on, Doc gets increasingly involved in the world of The Captain’s Inn. There’s practically a whole other show happening outside the workshop, with an entire supporting cast we never see. In this one, Ms. Ardath lures some visiting sailors to the inn by claiming that Doc is a retired sailor himself, renting him a cute little uniform, and scheduling him to give a speech about life on the ocean. But Doc’s not a sailor. He even gets seasick! What’s he gonna do?

409: Wembley’s Flight: Sprocket is determined to fly, using some wings he’s invented (By this point, they’d long since abandoned any pretense, if it ever existed, of Sprocket acting like a real dog). Doc thinks this is a bad idea. When exercising his authority as a dog owner doesn’t deter Sprocket, Doc uses science: He shows him what happens when he drops a scale model from a great height. 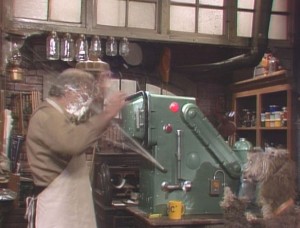 502: The Riddle of Rhyming Rock: Doc has to assemble the new automatic pie maker that Ms. Ardath ordered for the inn. He repeatedly ignores Sprocket’s suggestion to read the instructions, and… I’ll let you guess what happens.

505: The River of Life: Doc meets a guy who offers to pay him $100,000 to store some industrial waste in the caves under his property. Unsurprisingly, the test run is toxic to Fraggles and Gorgs and other living things.  But with all that happens, the show is very careful about not making Doc a bad guy. He genuinely doesn’t want to hurt anything, and he even offers to let a protesting Sprocket prove that something lives there.

508: Mokey, Then and Now: Doc builds a prop time machine for a local school play, and convinces Sprocket it really works by sending him into the machine and then putting on a fake beard. He ultimately gives himself away, though not by inducing a time-space continuum-destroying paradox but by making a costume mistake. 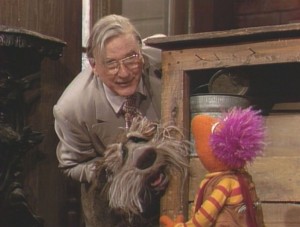 512: The Honk of Honks and 513: Change of Address: Joe singled out these episodes in his lovely tribute to Parkes last week, and for good reason. This series-ending two-parter begins when Doc goes about trying to prove definitively that nothing lives on the other side of the hole in the wall.  At first, we discover that Gobo can stand right in front of Doc and even talk to him without Doc ever seeing or hearing.  But when Doc has an emotional reaction to some news about Ned Shimmelfinney’s health and Gobo feels sympathy, that’s when they make a connection. Fraggle Rock doesn’t often get included on lists of best-ever TV series finales, but it absolutely deserves to.  Doc is joyful at meeting “the Fraggle” for the first time, and remorseful when he has to pack up and move away from the workshop and the Fraggle hole.  This is all crucial to the episode’s impact, and Gerry Parkes hits every note perfectly. Also, Doc sneaks his dog onto a plane in a trenchcoat and tells people it’s his grandfather, so that’s pretty great too. 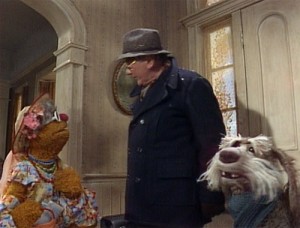 BONUS: A Muppet Family Christmas: Muppets always work well with guest stars, but who needs celebrities when you have Gerry Parkes as Doc? In this all-time Christmas classic, Parkes proves himself just as talented while working with a hundred Muppets as he was while working with one, and his interactions with various Muppet Show and Sesame Street characters are among the highlights of the special. Even if he never gets his nice, quiet Christmas.

What are your favorite Doc moments?  Which episodes are you shocked I left out?

Click here to talk to your dog about Ned Shimmelfinney on the Tough Pigs forum! 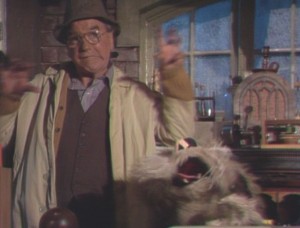