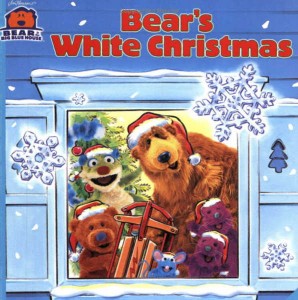 When Tough Pigs decided to attempt a 12 Days of Christmas project, we had limited options for things to cover. Our forefathers Danny and Kynan had covered most of the major specials during their classic “My Week With Muppet Christmas” series. We reviewed more recent productions such as Elmo’s Christmas Countdown and the A Green and Red Christmas CD when they were new. With that in mind, we decided to look to the wider world of Muppet literature. That’s where I found the 2003 book Bear’s White Christmas.

I’ve always felt that Bear in the Big Blue House was the underappreciated child in the Muppet family. The puppets were beautiful, the writing was consistently sharp, all of the characters were charming and amusing, and the songs were always catchy and clever. In the years since 1990, it’s easily the closest the Muppets have come to recreating the magic of the Sesame Street/Muppet Show/Fraggle Rock trifecta. Those shows (especially Sesame Street) have translated to print wonderfully, and I was eager to see if Bear met with the same success.

The story is a simple one. All of the child-like residents of the Big Blue House are hoping for a white Christmas, but it’s still brown outside. Bear tries his best to convince them that they can have holiday fun even without snow on the ground. Will it snow? Will they manage to have a great time on Christmas Day even if it doesn’t? You’ll have to read the book if you want to find out! 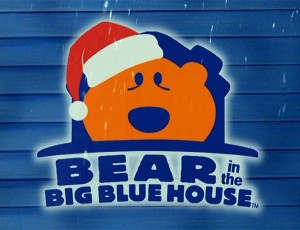 I will tell you, though, that the story is well worth reading, if you happen to have a child who enjoys the program (or if you are one). Writer Catherine Lukas does a good job capturing the voices of all of the characters (even Treelo, which I can’t imagine is a very easy task in print). Lukas shows us two different end-of-day visits with Luna, and she even remembers to include a brief moment of Tutter freaking out over his desire for a white Christmas. So even though Bear never directly addresses — or smells — the reader, it feels like a typical day at the Big Blue House.

However the story isn’t nearly as memorable to me as the art (for an example, look at the cover at the top of this article). Tom Brannon is the credited illustrator, but much of the work was done by an uncredited photographer. Brannon draws everything except for the characters themselves, who are poser puppets. The puppets were clearly posed specifically for the book. Many times throughout the book, the characters interact with the art. They hold hand-drawn gifts, they jump down watercolor stairs, and they ever wear cartoon coats, hats, and mittens.

Initially, I was put off by this effect. My first thought was that the mixture of the two media made each of them less memorable. But I warmed up to it as I read. If this was done with human characters, it would just look silly. If the book had simply used photos of the Muppets on the set, the characters would have seemed static and lifeless. But the puppets are so expressive that, combined with the illustrated backgrounds it works wonderfully to really bring the characters to life. It’s the use of those backgrounds that makes all the difference in the world. It lends the book a fanciful fairy tale quality. 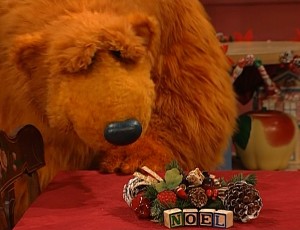 As an aside, I found myself wondering which were done first. Did Brannon draw around the posed characters, or were the character photos taken after Brannon had finished setting the scene? I’d guess it’s probably the former, but I’d love to read more an explanation of how the illustrations were created.

Really, part of me is a lot more interested in how the art was created than in the finished book. In theory, that’s the problem with attempting to review a book like this one, which is so heavily directed towards young children. It’s a cute, enjoyable little story, but not an especially memorable one. I’d certainly never use it convince my friends that they should check Bear in the Big Blue House. But, even looking at it as an adult, I was delighted simply because everyone seemed like the animals I knew from TV.

And that’s the magical appeal of the Muppets. If this book was about generic characters, (or even most other TV shows, really) I would never have given it a second look. But it’s about the gang from Bear in the Big Blue House, so I was eager to check in with characters that I love. And even though they were separated from their original puppeteers, those performances were so indelible that I could “hear” the characters when I looked at them on the page.

Like many Muppet books, this is a solid, well-made, pleasant read. If you want a nice holiday visit from Bear, by all means, read this story. It’s a fine choice for Muppet Christmas reading, and so are many of the others listed on Muppet Wiki’s Christmas Books page. In the days leading up to Christmas, we’ll be covering a few more of them right here on Tough Pigs. In the meantime, go out and discover some for yourself. It’s a sure way to fill your heart with Christmas cheer!

Click here to take Levar Burton’s word for it on the Tough Pigs Forum.