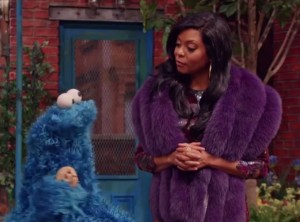 Last night, actress Taraji P. Henson hosted Saturday Night Live.  Henson (no relation to Jim, as far as I know) is best known for playing a firecracker of a character named Cookie on the hit show Empire.  Perhaps you’re aware that Sesame Street also has a character named Cookie.  Here’s the prerecorded sketch that shows what happens when you put that all together in SNL‘s comedy blender:

It’s probably funnier if you’re familiar with Empire, but either way, it’s pretty cool how many Sesame characters they threw in.

Click here to wear a red fur coat on the Tough Pigs forum!