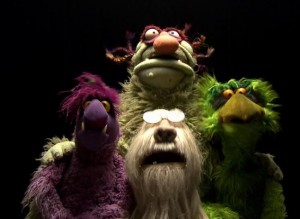 Ever since the Muppet Madness Tournament ended, I’ve been suffering from voting withdrawal. I just feel like my life has no meaning or purpose whatsoever without something Muppet-related to cast votes for.

Now the Webby Awards just made my day by nominating the Muppets’ worldwide YouTube sensation “Bohemian Rhapsody” in not one but two categories! The Webby, of course, is a very prestigious honor which is awarded to good stuff on the internet. You can head over tohttp://youtube.com/webby to register and vote for the Muppets in the Music and Viral categories.

But wait, there’s more! Sesame Street.org has also been nominated for a Webby, in the Family/Parenting website category. So you can vote for them too!

Of course you’ll recall that last year the Muppets won a Webby for Beaker’s “Ode to Joy” video, and we all cheered and celebrated and partied and did cartwheels in our underwear all night. So wouldn’t it be exciting if it happened again? I think it would. Get yourself to the Webbys site and vote today!

UPDATE: Check out the new video produced by the Muppets Studio to help rock the vote!

Thanks to TP pal Ryan Dosier for alerting us to the “Bohemian Rhapsody” nomination. Click here to see a little silhouetto of a clam on the Tough Pigs forum!