Back in 2012, for a dating anniversary with my now-fiancé, Tough Pigs’ own Ryan Roe, I decided to gift him an album of myself singing songs from Sesame Street with piano accompaniment (am I romantic, or what?!). I decided to revisit my old favorites and to familiarize myself with ones I didn’t know/remember.

With a Muppet Wiki list of songs displayed, I started searching for various titles on YouTube. I typed “The Monster in the Mirror” into the search bar and was surprised to see Usher instead of Grover.  I quickly realized that I had to add the words “Sesame Street” to every search because there were so many modern songs that either shared titles or chorus lyrics with the classic ditties.  It then occurred to me that it would be very “Tough Pigs” of me to take a look at these “Same Names” and analyze the songs next to each other. Ryan has been asking me for a few years now when I was going to finally write this article, so I guess the answer is “now.” 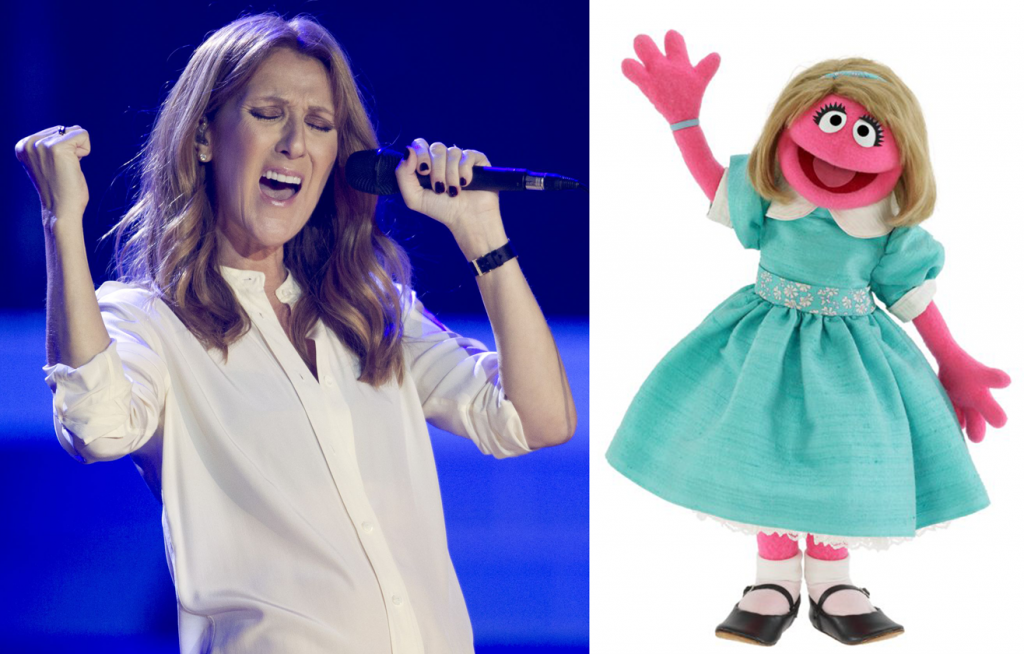 All by Myself: Celine Dion vs. Prairie Dawn

Although these two songs share a title, their messages could not be any more disparate. While Celine belts about her dependence on another, Prairie Dawn revels in the fact that she no longer needs to rely on other people to enjoy all life has to offer. Celine complains of feeling insecure about having nobody with which to spoon, while our blondie is completely confident in her ability to use one. As we know, Prairie fills her time with many activities: directing pageants, appearing on game shows and even trying exotic fruits. Unlike Celine, she has no idea that you’re not home, because she hasn’t called you. She’s too busy!

Perhaps if Ms. Dion took a page out of the Prairie Dawn Handbook and worked on bolstering her self-esteem via involvement in meaningful activities, she would be more appealing to potential friends and lovers. Sure, Prairie can be bossy, but it’s in that irresistible Queen Bee sort of way. I know I would be clamoring for her attention in the cafeteria. Celine admits that she was more independent when she “was young,” so should we worry that Ms. Dawn might later fall into the same codependency trap as Vegas’s Sweetheart? Somehow, I think we have nothing to worry about. Also, Prairie Dawn has been six for a very long time.

Monster in the Mirror: Usher vs. Grover

Usher’s “More,” which admittedly has an infectious melody and beat, seems to be addressed to the fans at his concerts in the same vein as Backstreet Boys’ “Larger than Life.” There is, however, an important distinction: while Kevin, Brian, AJ, Howie and Nick (yep, showing off!) were essentially writing a love letter to the fans that made them feel like gods, Usher’s song is a love letter to himself, whom he is certain is a god. He knows you “need” him; he “can feel it!” He then goes on to say that he is “a beast, an animal—a monster in the mirror.” Is it me, or did he sort of throw out the metaphor?

Usually the term “monster in the mirror” is supposed to have a negative connotation–when someone looks deep into themselves and doesn’t like what they see. This is precisely what makes the Sesame Street rendition so much fun. Grover flips the idiom on its head and teaches you to embrace your monster and face your fears and insecurities. He also makes an important statement about punishment fitting a crime: “do not wubba me or I will wubba you.” I actually heard this preceded the whole “eye for an eye stuff” in the first draft of the bible.

Up & Down: Britney Spears vs. Placido Flamingo

I am no Britney-hater. To the contrary, I went through a decade-long Britney phase and paid a pretty penny to be a mere three feet from her at Madison Square Garden during her Circus tour. With that said, “Up ‘N Down” is completely without merit. The melody is generic, the lyrics are not even a little clever and Britney boasts that she’s a “20 out of 10.” I hate to break it to you, Brit, but that makes you a 2. It’s OK; fractions can be tricky.

Sesame Street’s “Up and Down,” however, which Jerry Nelson’s Phil Harmonic informs us is from the “opera of the same name,” is a masterpiece. (Not to be confused with Cookie Monster & Herry’s “Up and Down,” also a masterpiece.) The strings part will make you feel like you are in Europe decades before you were born, and while you could deem this song to be a little stalkery (think Sting’s “I’ll Be Watching You”), I choose to see it as a ballad of friendship and loyalty–a willingness to stay together through life’s highs and lows.  Whether Ernie is sitting down, standing up, going upstairs or climbing a mountain, (which, let’s face it, he might be doing to get away from the clingy flamingo), Placido will follow “down and down and down, up up and down and then, up up and down and down and down, and up again.” 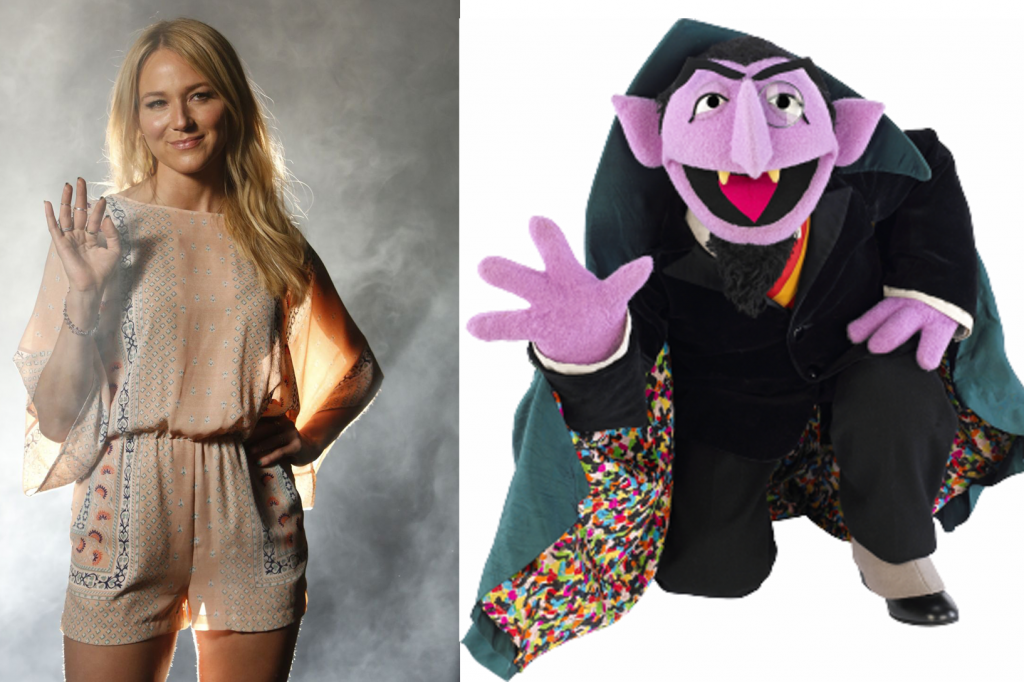 Hands: Jewel vs. The Count

Ryan didn’t believe me when I told him Jewel had a hit called “Hands.” He claimed to have never heard it on the radio while I recalled “hearing it all the time” in high school.  It turns out we were both right; the song was never commercially released on the radio, but its video was on regular rotation on MTV, which in essence was my radio [something something MTV used to play music videos].

The song was Jewel’s first hit from her second album, Spirit, and it reached #6 on the Billboard charts despite its absence from the radio waves. It is actually a perfect complement to The Count’s song of the same name. While he informs listeners of all the literal things hands can do (making a pizza pie, flipping a coin and pushing buttons might be my personal faves), Jewel gets a little more metaphorical. She reminds herself that regardless of the challenges she faces, she has control of her hands and can use them to do the right thing (she explained in concert that the song was inspired by a moment of weakness when she considered stealing a dress that she couldn’t afford).

While Jewel’s song has a melody that could definitely get stuck in your head, The Count’s signature Klezmer style will make you also want to sing along. Speaking of– “singing” is at least one thing The Count left out when he said “a mouth can talk, a mouth can chew. Not many things a mouth can do.”

Exit: R. Kelly vs. Little Chrissy and the Alphabeats

Oh, R. Kelly.  I’ve spent 20+ years trying to figure out if you’re a creative genius or completely off your rocker. The jury is still out (figuratively; he was acquitted in 2008 of all those sex allegations). His song “Exit,” which is so heavily autotuned that I couldn’t discern the lyrics without the help of a Google search, reveals that sex is indeed prominently on Kelly’s mind. He wants to make sure the attractive lady he is ogling on the dancefloor knows where the exit is in case she wants to get into his “Benz,” do drugs and cheat on her partner.

In case you need a scale with which to gauge just how appealing this woman is, you could measure by the number of syllables Kelly infuses into the word “beautiful” (17). At one point he boasts that “Kells gives sex seminars.” It is unclear whether or not those involve PowerPoint presentations, but one thing is for certain: Kelly’s mountain-home is conveniently equipped with a stripper pole. At one point he tells the girl she’s “got the dance order.” What does this mean? This is just one of many R. Kelly mysteries I might never solve (I only made it through 13 of 33 installments of “In the Closet”).

The classic Sesame Street “Exit” number also wants to make sure you know where the exit is, though there is no mention of a ménage à trois. While it might seem like it’s simply teaching children the importance of where they should walk-not-run in an emergency, don’t discount this song as pedestrian (see what I did there?). There is a whole other layer to “Exit.” After all, Little Chrissy dedicated it to “all you cats who feel stuck in one place because you don’t know which door to go out.” If that’s not a metaphor for growing up and making choices, I don’t know what is. I have a feeling R. Kelly missed that episode of Sesame Street.

Click here to get away from the clingy flamingo on the Tough Pigs forum! 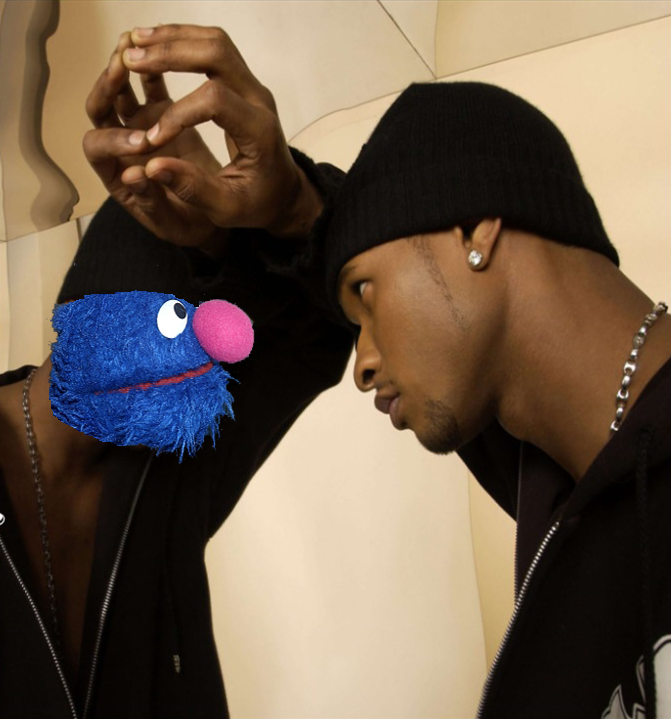