And now, the moment you’ve been waiting for: The moment when we award Muppet toys for being visually unappealing! To kick things off, here’s our special guest, A Freaky Kermit Jack-in-the-Box (submitted by Justin Plank), to reiterate the rules of the pageant. 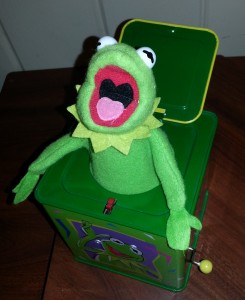 “SUWPWISE! Over the past few weeks, the Ugly Toy contestants were rated, evaluated, and in some cases hated by the Tough Pigs community at large. People rated each toy on a scale of 1 to 5, with 1 being “not that ugly” and 5 being “extreeeeemely ugly.” And now we’ll count down the “winners,” starting with the Not That Ugly toys, and working up to the toys that have been voted by our readers as the ugliest toys of the year. Color commentary from the voters is provided for your entertainment. POP GOES THE WEASEL HA HA HA HAHAHAHAHA HA!”

Thanks, Freaky Kermit Jack-in-the-Box! I couldn’t have said it better myself. And now, on with the results.

NOT REALLY THAT UGLY 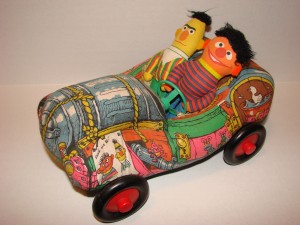 It is neither prudent nor wise to cloud watch whilst driving.
-Matthew Brink

When this toy was made in 1975, I think the dolls sat up a little straighter and it looked more like they were driving a car, and less like they’re in bed together. Time has not been kind to this toy.
-Danny Horn

I’m certain this is actually a poorly-constructed shoe that inexplicably has wheels. Hey, it makes more sense than a car with a bucket of water attached to it.
-Samuel B

What do you even do with this thing?
-Aimee Johnson 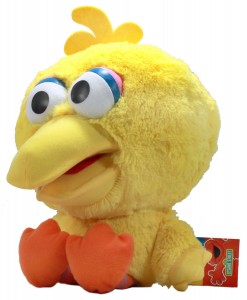 Is that your nose, or did someone glue a banana to your face?
-Matthew Brink

Japanese people love to make toys with huge heads because they’re scientifically designed to be adorable. The toys, not the Japanese people. Well, maybe both.
-Danny Horn

Just think: if that puppet were 8’2″, its head would be as tall as Bob McGrath.
-Evan Goldaper

Wow, Big Bird’s fame has really gone to his head.
-Samuel B

That’s what he gets when he tries eating an entire watermelon in one bite.
-Shane Keating 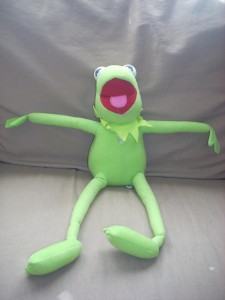 Kermit never WAS good at the YMCA dance.
-Weston Long

If I recall correctly, Kermit’s shoes refuse to ever grow weary. But it’s hard when each of his feet is the size of his nephew.
-Evan Goldaper

His mouth is permanently open because he’s telling you that he just flew in from Hollywood and boy are his arms tired.
-Danny Horn

Someone should’ve told them, Macy’s Parade balloons are dry-clean only.
-Matthew Brink

There were also two jokes about gout. 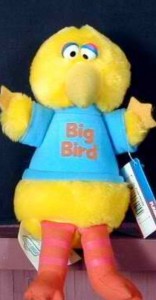 Why do companies have such a hard time with getting eyes to look normal?
-Herbowski

There’s nothing particularly wrong with this toy that throwing it into the trash
and forgetting about it wouldn’t cure.
-Danny Horn 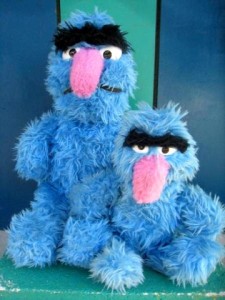 The bigger one doesn’t look too bad, but the smaller one has a freakishly big nose.
-Michael Wermuth, Jr.

Herry has a huge honker, and it’s hilarious!
-Mike C

Little known fact: a monster’s tongue is between his eyes.
-James Dixon

These dolls are really ugly, but they capture the look and feel of the various
non-Herry monsters from Season 1 of Sesame Street, so I can’t possibly
hate them.
-Evan Goldaper

The only appropriate response to these toys is to cuddle them. Little
woojums.
-Danny Horn 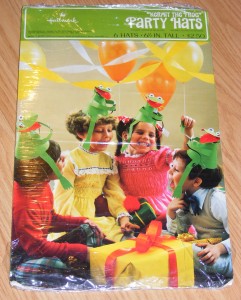 Nothing like having a “gone with the Schwinn” version of Kermit on your
head to set the party mood!
-Chris Stulz

And now, Kermit and his duplicates practice the little-known yoga
formation, the “flattened frog”, on some unwilling kids’ heads.
-Samuel B

On the one hand, these are ridiculous and laughably awful, but at the same
time I kind of really want to wear one of them on my next birthday. I’m
currently resisting the urge to google where to purchase them.
-Julia Gaskill

I’ve been to gay clubs like this. Never again.
-Peter Savieri 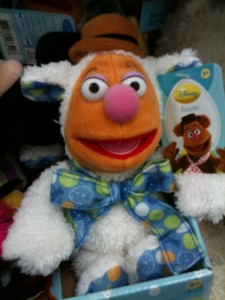 What! Why?
-Isha May

Yes, he still looks like Fozzie’s evil twin, but at least he’s an evil twin in a good mood. He might even be forgiven for the lamb costume. But that tie is not helpful. That is a very bad tie.
-Danny Horn

That isn’t a doll, that’s an old picture from Fozzie’s elementary school play about the farm!
-Samuel B

It’s for his new act – “Rabbit and Costello”
-Shane Keating

The perfect gift to let your child know that you don’t love them.
-Julia Gaskill 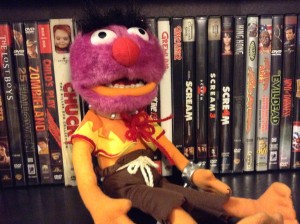 After seeing the results of his haircut, Animal walked around in a stupor for days.
-James Dixon

This is what happened when Animal got plastic surgery so he could go to the Muppaphone reunion.
-Joe Newman-Getzler

This toy makes me very unhappy. It’s Animal so it should make you smile, but to me, it’s just sad.
-Deidre F

I always wondered what it would look like if a Care Bear died of shock.
-Joe Hennes 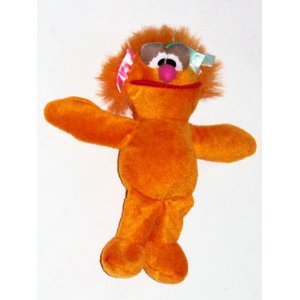 Do I focus on the head shape, or the misplaced hair, or the fur texture, or the eye focus, or the 400% too much eyelids?
-Justin Werfel

She’s really sad about her tiny, tiny nose.
-Samuel B

If you hadn’t told me that was Zoe I never would have known.
-Isha May

This is more or less what Zoe looks like anyway.
-Danny Horn 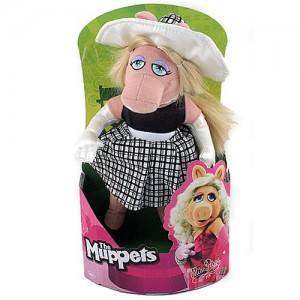 It looks like Miss Piggy was talking to someone on a tin can and string, but forgot to take off the can.
-Joe Hennes

If I remember correctly, the Henson Stitch is supposed to be between the eyes…
-Robert Poole

It’s like a snowth dressed as golf caddy.
-Isha May

There were also four jokes about this being Miss Piggy before her nose job. 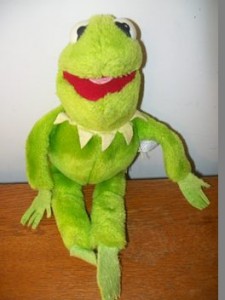 Kermit should probably lay off the flies. Apparently, he is allergic.
-Aimee Johnson

Little do many Muppet fans know that Kermit’s first job was being the gremlin on the plane in The Twilight Zone.
-Joe Newman-Getzler

I mean, it wouldn’t be so bad, if Kermit was furry, or had these proportions, or looked like this at all.
-Justin Werfel 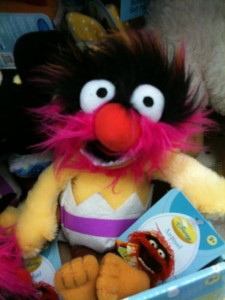 Disney, how many times do we have to tell you? Yosemite Sam is a Warner Brothers property.
-Justin Werfel

If you think about it, this is actually a CUTER version of Animal.
-Aimee Johnson

His eyes are okay and he’s not dressed like a lamb. You have to give him credit for the smashed egg thing. This could have been a good toy if it was bigger, and made by a different company using different materials and a completely different design.
-Danny Horn 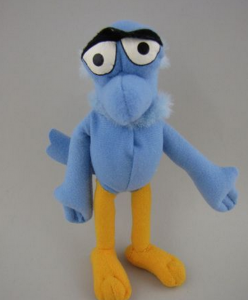 Not grumpy enough to even conceivably pass as Sam.
-Julia Gaskill

Is that who that’s supposed to be?
-James Dixon

Birds are supposed to have wings and a beak. This toy has neither.
-Danny Horn

Aww. It’s like baby Sam hatched out of the egg and then someone told him he was in Canada.
-Isha May

This is what happens when Jewel from Rio has a kid with Tweety Bird who then goes and gets severe liposuction before joining the Sleaze Brothers as the Bluebird of Happiness. There. Now you can’t unthink it.
-Joe Newman-Getzler

Poor Sam lost all that weight to play the part of Gandhi. Then they gave it to that hack Kingsley.
-Mike C

He looks like he just saw Wayne and Wanda making out.
-Matthew Brink 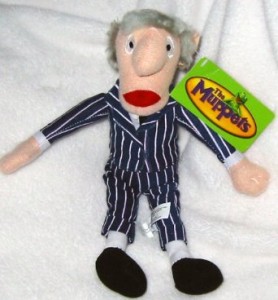 Is he falling….or did he already land?
-Mike C

The body of Pee-wee Herman, the face of Miracle Max from “The Princess Bride” and backwards feet. Statler in a nutshell really.
-Chandler Jackson

This is Statler when he tried on his childhood Bar Mitzvah suit and his mom’s lipstick.
-Weston Long

I think at least he’s topologically equivalent to the real Statler.
-Justin Werfel 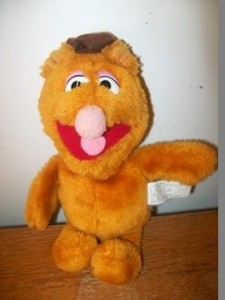 One wrong step, and Fozzie could eat his own nose.
-Matthew Soberman

Gonzo had to split up with Camilla, because she caught him seeing someone on the side!
-Mike C

You have to wonder what kind of reference material they used over at Toy Factory, if any. Gonzo has never worn an outfit even remotely like that. Are those supposed to be snow boots? Are they platform snow boots? And if it’s snow-boots weather, then why is his collar open like that? If somebody brought that toy into your house then you’d have to move.
-Danny Horn

I’m forced to look away from Gonzo’s eyes and nose, so I’d like to point out that his belt buckle looks kind of like an adorable smiling face. Let’s just focus on that.
-Evan Goldaper

In the end, it was Gonzo’s lack of facial proportions that got him kicked out of the Jackson 5.
-Matthew Soberman

Buy a nose, get a free Gonzo!
-Joe Hennes 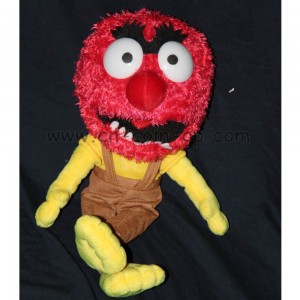 So crazy looking that it almost goes all the way around past ugly and becomes cute again. He’s wearing little overalls. You can’t hate him.
-Danny Horn

YES! They got the color right! Even Disney couldn’t be bothered to do that! He’s certainly angry about something. Possibly his orthodontia.
-Justin Werfel

Tell it to GO BYE BYE as soon as possible.
-Mat Lippiello

Can you feel the excitement?  It was a close race this year, but ultimately one toy won out, and will be awarded the International Trophy of Muppet Toy Ugliness.  And here he is… 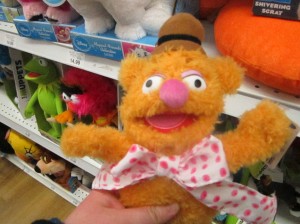 I definitely saw this Fozzie plush while I was Christmas shopping with my dad back in December. He didn’t understand why I was sitting on the ground, laugh-crying and hunched over this toy.
-Julia Gaskill

This one actually makes me angry. We finally get a Fozzie Bear doll into Toys R Us again and this is what he looks like. The one in this photo is actually better than some of the Fozzies I’ve seen on the shelves. They look like angry little hate demons.
-Danny Horn

There’s literally nothing right about this doll.
-Weston Long

And there it is!  For the second time in history, a Fozzie toy wins the dubious crown. Speaking of which, be sure to check out our previous pageants if you haven’t already, or if you want to take a trip down repressed memory lane.

Click here to wear a t-shirt with your name on it, and no pants, on the Tough Pigs forum!