A while back, I asked YOU, the readers of this website, for your thoughts on our favorite movie of 2014, Muppets Most Wanted, in the concise format of Two Things: Give me one thing you liked about the movie and one thing you didn’t. Unsurprisingly, I got a ton of responses. So many, in fact, that it’s enough for two articles! This is number one; the next part will be number two.

And now, while we impatiently wait for the Blu-ray to come out, here are your Two Things About Muppets Most Wanted! 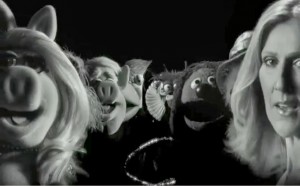 Micah Mann:
I liked pretty much EVERYTHING about Muppets Most Wanted. From the songs to the action from the Muppets to the cameos. I loved both of Constantine’s main songs as well as “Something So Right” with Celine Dion, which has a possibility of getting Bret McKenzie a 2nd Oscar. Pretty much everything was BIGGER & BETTER compared to the last movie The Muppets!

I disliked the fact that not that many people love it in comparison to The Muppets, and that it didn’t have a BIG opening as expected.

Rob Wiles:
The thing I loved – well, there is so much that I really enjoyed in the movie but I think my favourite moment has to be the “I’ll Give You What You Want” sequence.

And while there were moments I could nitpick over, the only thing I really disliked was the blatant product placement when Fozzie is eating a Subway sandwich.

Disliked: The name “Muppet Ladder.” They don’t have names for the things they do, they just do things.

Gavin:
What I loved about it was the fact they gave some of the other Muppets more airtime. I loved Sam’s role in the movie, and beakers roll at the end, and even Rizzo’s little piece of dialog that I missed so much from the last movie. The movie wasn’t too “Kermit and Piggy heavy” and I loved it for that reason.

What I didn’t like too much was how rushed it all felt. The gag in the last movie about how they could travel by map was OK as a once off, but I didn’t enjoy the fact they traveled the world so fast, and all by a train. It just felt far too forced and rushed. I prefer it when they stick to one location per movie. But that’s honestly my only complaint. 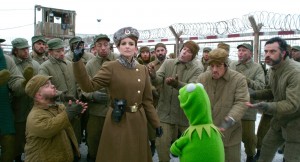 Weston Long:
Positive: So many things. I loved the plot, songs, casting, new characters, humor, and so many others. The real standouts to me were Tina Fey and Matt Vogel’s roles as Nadya and Constantine. Both genius performances that meshed with the rest of the troupe seamlessly.

Negative: Besides how much disapproval the movie is getting from critics, the one negative comment I have is that I’m not sure how much Walter works as a character outside of the plot of The Muppets. There’s no real hook to him, and I don’t think there should be a Muppet whose big character trait is his obsession with the Muppets.

tsay1325:
The good thing: It felt like a Muppet movie. I loved Kermit taking the main character position again, unlike The Muppets.

The bad thing: Too much Walter. I feel like his character arc has been over since the end of The Muppets, so he needs to sink into the background again.

Scott Champion:
Good: Disney went all out promoting MUPPETS MOST WANTED. No Muppet fan can honestly say Disney didn’t do enough to build awareness. Kermit was on my cereal box!

Bad: I have no qualms with the film itself. But I fear the soft US opening weekend might sway Disney to shelve future Muppet projects. Here’s hoping the international box office keeps the Muppets afloat and we get more movies!

Jack Thomas:
Like Thing: The style. While not all of the effects were good (The Wall was awful, and Constantine’s dance number was well done but oddly uncomfortable), I overall liked the more modern, stylized feel. A lot of people might feel that utilizing too many effects goes against the magic of the Muppets, but I think Jim would have loved the spectacle this movie achieved.

Not-Like Thing: It wasn’t that funny. While a Muppet fan will be delighted every moment a Muppet is onscreen, this movie just didn’t have very many jokes. There were long stretches without any laughs, or with only the most minor of chuckles. The script lacked the constant humor of other Muppet movies, and not enough laughs to keep most casual moviegoers entertained (as you’ll see in both the reviews and the box office numbers). 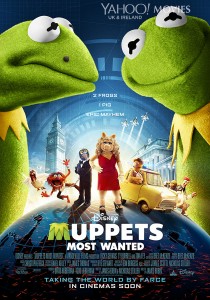 Ivan Guerrero:
What I liked: The comedic writing was sharp. It had everything from metaparody, self-referential humor, absurdist, visual gags, wordplay, physical humor, irony and wit.

What I didn’t like:I didn’t care for the creative direction of the marketing campaign. It felt like everything from the title and logo, to the posters and trailers, were produced to appeal to a younger target demographic that did not necessarily know or care for the Muppets. It ended up looking artificial, generic and bland, and it failed to capture the essence of the Muppets. They never used to talk down to the audience.

Jake Friedman:
What I liked: All the songs. Every last one. Good job, Bret McKenzie and Muppet singers. I never wanted to listen to a movie soundtrack so much since the days of cassette tapes and station wagons.

What I didn’t like: The plot holes: If Nadya knows he’s Kermit, why doesn’t she free him? How does a centuries-old locket deactivate a modern security system?

Chris Stulz:
If I can only choose one thing I liked about Muppets Most Wanted it’s the songs. “We’re Doing a Sequel”, “Interrogation Song,” “I’ll Get You What You Want (Cockatoo in Malibu)” and “Something So Right” are just as good as any classic Muppet song and the rest aren’t bad either!

One thing I disliked is the ending. The CGI wall effects being the worst offender. I go into much more detail on the Muppet Stuff blog.

Kevin Hansen:
The thing I liked: The music as a whole was better than the last movie. I don’t skip any of the songs on the soundtrack and already sing along!

The thing I didn’t like: The poorly green screened wall at the end with both the Muppets and the humans should have been scrapped when they realized how bad it looked. At that point though, I was riding high on how great the film was that it didn’t really matter. 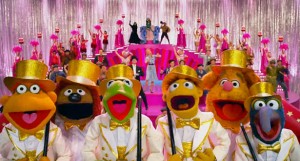 Meagan Barbeau:
One thing I really liked about Muppets Most Wanted was the music. I think Bret McKenzie really outdid himself this time around. It’s fun and upbeat, and there’s a lot of diversity. All the songs have been stuck in my head since I first saw the movie!

On the other hand, the main problem I had with the movie was that it was sold as a sequel, even though it had could have definitely worked as a completely different movie in its own right. And other than the very beginning, that’s exactly what it does. I think it only invites criticism as most people will naturally compare it, perhaps unfairly, to The Muppets.

Dre Sayas:
One thing I liked about Muppets Most Wanted is the character Constantine! So many good numbers and so much amazing puppetry that made him likeable.

One thing I didn’t like was that they cut “I’ll Get You What You Want,” “We’re Doing a Sequel,” and “Interrogation Song!”

Michael Wermuth Jr.:
Good thing: The scenes with Sam the Eagle and Jean-Pierre are hilarious, especially “The Interrogation Song”.

DISLIKED: That even though this is the second film that features Muppet Show segments, there was still no Vet’s Hospital or Pigs In Space. (NOTE: It actually kills me having to list a negative about this awesome Muppet ride of a movie!) 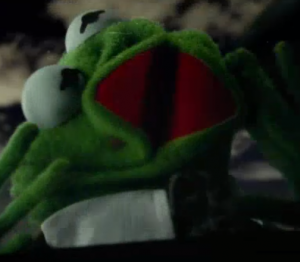 John Papovitch:
What I liked: The multi-layered humor in this movie. The comedy in this film is nothing short of fantastic, the same jokes always manage to crack me up every time and it’s great seeing a general audience laugh at the same jokes with me.

What I didn’t like: Maybe it’s not so much the movie itself, but I find it just not sticking with me the way The Muppets did, which doesn’t mean it isn’t good, it just hasn’t left the same mark in my cranium. Both times I’ve seen the movie since my first viewing, there have been instances where I had to remind myself “Oh right, that does happen in this movie.” Whereas with the last movie, I had a basic gist each subsequent viewing of what to expect.

K Lee:
Liked: I thoroughly enjoyed the parts with Sam the Eagle and Ty Burrell, especially “The Interrogation Song.” They have a lot of great chemistry together.

Didn’t Like: In the past, the cameo guest stars have actually interacted with the Muppets. Here they just pop up, say a line, and then run off, and that kind of ruins the humor in their cameos. This kind of made Stanley Tucci’s cameo more enjoyable, because he actually talks to Kermit.

Charlie Barrett:
Liked: The songs were just amazing, and I was glad that Rizzo and Robin were in it, even if they only had one or two lines.

Didn’t Like: I didn’t enjoy the ending scene too much. Not the song, the whole celebrity on the wall thing. I don’t understand why they came back in the first place. I mean isn’t the whole point of the cameo for them to briefly appear and then be gone? It looks so fake and horrible too. And one other thing I don’t get about it is where on the wall are they? At one point it zooms out and we get a shot of the whole thing and they’re nowhere to be seen.

Ryan Dosier:
One thing I liked: Gonzo getting to be weird again. He was much more vocal and felt more present this go around.

One thing I disliked: The spinning clock during the Electric Mayhem jam. Felt like a major, major missed opportunity for a joke. Totally flat, too long moment with no payoff.

Did not like so much: Subway cups appearing front and center. #notevensubtle

And there you have it. After closely analyzing all the submissions, I’ve come to the following conclusion about the average fan’s take on this movie: Songs = good, the Wall = bad. Stay tuned for more Two Things!

Click here to deactivate a modern security system on the Tough Pigs forum!