Launched in August, 2001, ToughPigs is celebrating its 15th year of existence!  That’s a decade-and-a-half of interviews, newsbits, silly commentaries, complaints, observations, and witticisms all about the Muppets. Thanks to all of you for a great 15 years, and here’s to 15 more! 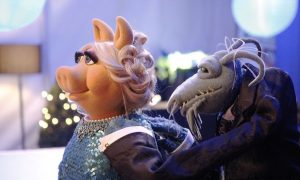 I put this little game together for the 10th anniversary of Tough Pigs, and ever since then I’ve been clamoring for more.  We’re now celebrating 15 years of this website, so it’s the perfect time to do it again!

Here’s the premise: We’ve written a lot of reviews of a lot of Muppety things over the years.  Below, you’ll find 23 quotes excerpted from various reviews spanning the last five years of Tough Pigs’ fifteen-year history, and a “word bank” containing the titles of twenty Muppety (or Henson-y) projects that we’ve reviewed.  Can you match each quote to the review it came from? Every project corresponds to just one quote and vice versa; there should be no leftovers when you’re finished.  If it helps, maybe you’ll want to print out a copy of the whole thing so you can cross things off the list as you go.  Then print out another copy and give it to your third-favorite barista.

1. “Now, I’ll be the first to admit to hero worshiping Jim.  So it’s humbling and a little surprising to see the stories where Jim isn’t exactly painted as a saint.  For example, we learned about the time that Jim decided to drop acid.  And that when Cheryl and Lisa Henson were 4 and 5, respectively, Jane accidentally ran them over with her car (don’t worry, they were okay).”

2. “I’ll give credit where credit is due: this scent definitely will make you think of Boober Fraggle. Why’s that? Because it smells pretty much exactly like soap.”

3. “[Title of production] further distinguishes itself by casting the audience in a supporting role in each of its five shows.  I was startled when, in the opening scene of Athlete the Musical, Mr. Monster informed me that I would be playing the role of his coach, without even so much as asking whether I was an Equity member. “

4. “No matter how you interpret the metaphor here, this is a compelling story that brings to light the inherent contradiction that’s been a part of Miss Piggy’s character since The Muppet Show: a glamorous star who’s also an unglamorous barnyard animal.”

5. “Oh, and did you know that Kermit the Frog is green? On my old VHS and DVD copies, he was sort of a medium olive hue, but on the Blu-ray his green is as vibrant as his fellow Disney-owned characters the Hulk and Mike Wazowski. You can even see his fleece sparkle in the light.”

6. “I liked this app better than the one with just Grover.  Grover and Elmo are funny together, and you get to play more games and do new stuff with them.  I like the old app too, but this one is more fun for me.”

7. “Picking up where the thrilling 3rd season cliffhanger left us … well, hanging, the termites Bob brought home that destroyed the house are still eating away at the Duncans’ home and the Duncans are still living in a hotel. Gabe can’t take any more peanut butter sandwiches and schemes to either get some room service (Like Amy would let him do THAT, ha ha!) or eat at a conference the hotel is having for accountants.”

8. “So here’s how you make a DVD bonus feature: 1. Take a freeze frame of Michael Jackson and a photo of Oscar the Grouch. 2. Edit Michael Jackson’s few lines of dialogue to make it sound like a song about the joys of imagination. 3. Throw some fuzzy pink confetti animation in the background. 4. EVERYBODY DANCE”

9. “AHHHHH!  Booobies!  Why are those things so close to the Muppets??”

10.”Langridge’s skill for capturing that TMS staging will be one of the things I miss most, so I’m glad we got such a fine example of it in this issue. He also, as always, add touches that would be impossible to execute with the puppets, such as a snowball fight where most of the participants would have rod hands.”

11. “But while the commentary was fun and interesting, it still seems like a gaping hole to not have a commentary with any of the Muppet performers.  I understand that Disney wants to keep the “magic” hidden, but the Muppets aren’t Santa Claus; kids know they’re not real.”

12.  “Reading through each month of each year, I was amazed at how close together the journal entries are. It’s like, one day he’s directing a Fraggle Rock in Canada and then a few days later he’s working on Labyrinth and then a few days after that he’s shooting a TV special or something, and somehow he still managed to take his family on awesome vacations.  If I didn’t like the guy so much, this book would cause me to resent him for making me feel lazy.”

13. “This is what the Muppets were born to do. Hand them canes, slap on some top hats and add a swingin’ bass line, and you have all the ingredients for a sensational number.”

14. “Sometimes pages and pages go by without dialogue, so the art has to carry all of the action.  But it’s never confusing, which is pretty impressive for a story that features stuff like a guy getting chased through the desert by an Arabian army and a football team.”

15. “It has a pretty standard look and sound, which Fraggle Rock never had, and it’s more unapologetically aimed at little kids. The dialogue isn’t brilliant (I cringe every time a character says “Funtastic!”), though I do like the use of “Oh, fiddleheads!” as an expletive.”

16. “On the other side of that coin, when Walter tells the gang that they should clean up the theater to music, this inspires them to play “We Built This City” by Starship. This happens in the film, and also on the soundtrack, in back-to-back tracks. Interesting tidbit for you: This song was voted “Most Awesomely Bad Song … Ever” by Blender magazine in 2004 as well as “Worst Song of the ‘80s” by Rolling Stone in 2011.”

17. “In what is probably the funniest and most satisfying of the Intermission features is the Swedish Chef reading “‘Twas the Night Before Christmas” in his native tongue, backed up by singing chickens.  If that doesn’t get your Muppety Christmas alarm going off, I don’t know what will.”

18. “In fact, if I have one criticism, it’s that at times, the film is overbearingly feel-good. When they mixed the music for the film, somebody must have been sitting on the “HUGE, SWELLING STRINGS” button.  Caroll’s story is inspiring enough on its own, but the score practically grabs you by the collar, gets right in your face and shouts, “THIS IS INSPIRING!”  It’s a bit much after a while.”

19. “Even the dullest human beings will enjoy the Muppets.  Didn’t get the reference to Kermit on the 405?  Don’t worry, you’ll laugh at Beaker getting tasered.  Unsure why Miss Piggy is ranting about Trader Joe’s? Just wait, you’ll see her faceplant into a plate glass window.  There’s something for everybody!”

20. “Last night on ABC, a creepy-looking blue dragon-man was responsible for some of the most genuinely affecting moments I’ve seen on television this season.”

21. “And Tina Fey was unsurprisingly the human MVP of the movie.  Not only does she deliver every line with perfect comedic timing and poise, but she also happens to have a lovely singing voice (with a Russian accent too!).”

23. “When Kristin Newman took over as showrunner, she said that the one thing she wanted to bring back to The Muppets is “joy”.  And I think she absolutely succeeded.  There’s not much television these days, especially on prime time, that can offer the same sort of joy, which is all the more reason that ABC should give it a shot at a second season.  Did we say #RenewTheMuppets yet?  Because #RenewTheMuppets.”

Okay… Have you matched them all?  Click here for the answers and see if you’re right!

And click here to faceplant into a plate glass window on the Tough Pigs forum! 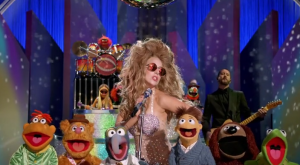