New York Comic Con was back in full swing this year after a pandemic-related canceled event in 2020, and then a heavily reduced convention in 2021. With the crowds and the celebs and the vendors and the cosplayers all back, we also saw a much appreciated return from the world of Muppet fandom to the Con.

Yes, there was a LOT of Muppet stuff to see at NYCC this year, including panels (from all of the Big Three: Muppets, Sesame, and Henson), original artwork, merch, and cosplay. Whether you were able to attend or not, I’m sure you’re itching to hear what the Con had to offer. Well, get ready for that itch to be scratched because we’ve got a New York Comic Con roundup ready for ya right now!

First and foremost, we gotta toot our own horn. ToughPigs presented a panel all about Jim Henson’s early works including Sam and Friends and Jim’s early commercials. ToughPigs’ own Joe Hennes moderated, and the panelists included “Sam and Friends: The Story of Jim Henson’s First Television Show” author Craig Shemin, Muppet performer Ryan Dillon, Henson Company Archivist Susie Tofte, and “Sam and Friends” book cover artist Dave Hulteen. (Oh, and Sam was there too. At least, a stuffed replica built by Emily Engel.) The event was a huge hit, with a sold-out room with over 300 attendees!

We shared video footage from Jim’s early work, including the classic “Visual Thinking” and some Wilkins commercials, which had the audience in stitches. Craig shared some stories about Jane Henson’s contributions to Sam and Friends, and more about the development of his new book. Ryan brought along a Henson Workshop rehearsal puppet and showcased some of the innovations in television puppetry that Jim Henson created, which are still in use today. Susie gave us a peek into the world of the Archives, and the joy of finding and restoring seemingly lost materials. And Dave was overjoyed to share his process in creating the book art and graduating from “unofficial Muppet artist” to “official”.

We’re working on obtaining the official video of the event, so we’ll hopefully have more to share very soon.

All in all, we were all extremely pleased with the success of our panel, and we hope we inspired a few people in attendance with Jim’s story. And here’s hoping we get to do another one next year!

The Electric Mayhem have a new series coming next year: The Muppets Mayhem. To get us pumped for it, Comic Con brought in four of the human actors (Lily Singh, Saara Chaudry, Tahj Mowry, and Anders Holm) and three producers (Muppet performer Bill Barretta, Adam Goldberg, and Jeff Yorkes). Sadly, there were no Muppets in attendance (though I can’t say the same for certain about the audience).

But before the panel began, we got to see an exclusive clip of Floyd and Animal (pre-taped) apologizing for not being at NYCC, but excited to share the world’s very first look at Muppets Mayhem. In the scene, the Electric Mayhem arrives at Nora’s (Lily Singh) house for the first time, assuming that they’d be crashing with her. We presume that this clip will be available for everyone to see soon, so read our brief description at your own risk for spoilers:

Nora gets a knock on her door and outside is Animal, holding an offering of flowers ripped from the ground (with a mound of soil hanging onto the roots). The rest of the Mayhem band barges in with their personal affects – Lips mumbles “Lucy, I’m home!”, Zoot snaps a Polaroid, Janice asks where she can do some pantsless yoga. Zoot and Lips then wander into Hannah’s room while she’s livestreaming a make-up tutorial to her horror; Nora ushers her out of the house while she deals with the band. Animal points to a decorative neon “H” on the wall and calls it a “W,” Floyd says he’s just learning the alphabet. Dr. Teeth appears to be missing, and Janice says a sentence that uses the words “hot tub” a lot. We then see Dr. Teeth chilling in the hot tub.

For the rest of the panel, we were treated to some insights on each of the actors’ characters, and light teases for what might or might not happen in the show. There were talks of albums being recorded, strange things happening on social media, and a possible romance for one or more of the Mayhem members.

The highlight for me was hearing from Executive Producers Adam Goldberg and Jeff Yorkes, who both spoke about being massive Muppet fans and their excitement in getting to play in the Muppet sandbox. We could tell that they’re sincere in their love for the brand, and extremely receptive to taking the lead from the Muppet performers who’ve been working with the characters for decades. We also learned after the panel that both Adam and Jeff are ToughPigs readers, which is truly the greatest honor we could’ve gotten. (And if they’re reading this: Hi guys!)

Thanks to the good folks at Laughing Place, you’re able to watch the full panel on YouTube if you so wish:

Goldberg and Yorkes also revealed a few new details to us after the panel: The show will feature at least one song per episode. The series will result in an actual album being released, which will have new recordings by the current Electric Mayhem performers and a mix of original and cover songs. And there will be many deep-cut Easter eggs for fans like us to enjoy, including one from Emmet Otter’s Jug Band Christmas! How’s THAT for an exclusive???

According to Rockefeller, the show really came about in the midst of the pandemic where social interactions were pretty much gone. Thus, the show was conceived as a way to get kids to interact and connect with the Muppet characters.

Edmonson spoke at length about the music, which makes sense as it is a musical. He talked about taking the classic songs and giving them new arrangements and spins. He also played some snippets of the existing songs from the show performed in the musical, followed by demos and full audio of the versions heard in the show to compare how they were changed. He also talked about the new songs written just for the show – they had some back-ups just in case the people they asked (Tom Kitt and Helen Park) were not able to compose them.

Tyler Bunch was very particular when talking about the puppetry aspect, as kids were quite present in the crowd. Rather than crack their view on reality where Elmo is their real friend who lives in their TV, he claimed that the characters all have lives outside the theater – but when they get to the theater, they’re very tired so they need “helpers” to remind them how to move and act as themselves. Oh, and he broke out a Christopher Walken impression at one point.

The panel also featured the only live Muppet at the con – a Honker! Those guys are fun to see! Obviously, they’re the only ones allowed to appear to promote the show since they don’t have to talk at all. The Honker hung around through the end of the panel, where after a brief Q&A with the public, people were able to get pictures with him. One adorable girl the line kept calling him “Mister Muppet,” which is what his canonical name should be from now on.

As always, Artists Alley is a hotspot for finding original and unique Muppet artwork. Here are just a few of our favorite pieces that we spotted:

Did you know you can buy stuff at Comic Con??? It’s true! We found quite a few Muppet items for sale (or for sale… soon?). For example:

Always a highlight, the Muppet cosplayers were out and about at NYCC. In addition to the ones you’ll see below, we also spotted some clever mashups (including an Over the Garden Wall costume holding a Kermit-as-Greg’s-pet-frog) and a Nanny with Muppet Babies plush covering her face, but with the crowds being what they were, we couldn’t stop them for photos in time.

And that’s it for this year’s New York Comic Con! As sad as we are to see it come to an end, the good news is that there’ll be another one next year, with all new Muppet stuff to spot! We’re already counting the days!

Click here to moderate a panel all about the Tough Pigs forum! 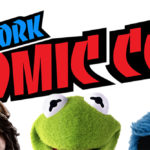