Our coverage of New York Comic Con is a team effort.  This article could not have been written without the contributions of Matthew Soberman, Ryan Roe, Louie Pearlman, Evan Goldaper, and Staci Rosen.  Thanks, team!

New York Comic Con, better known as my Christmas, came once again this week, and your ToughPigs crew was present to scope out all of the Muppet goodness we could squeeze out of the convention.  We found artwork, special guests, cosplayers, merchandise, and more.  Read all about it below! 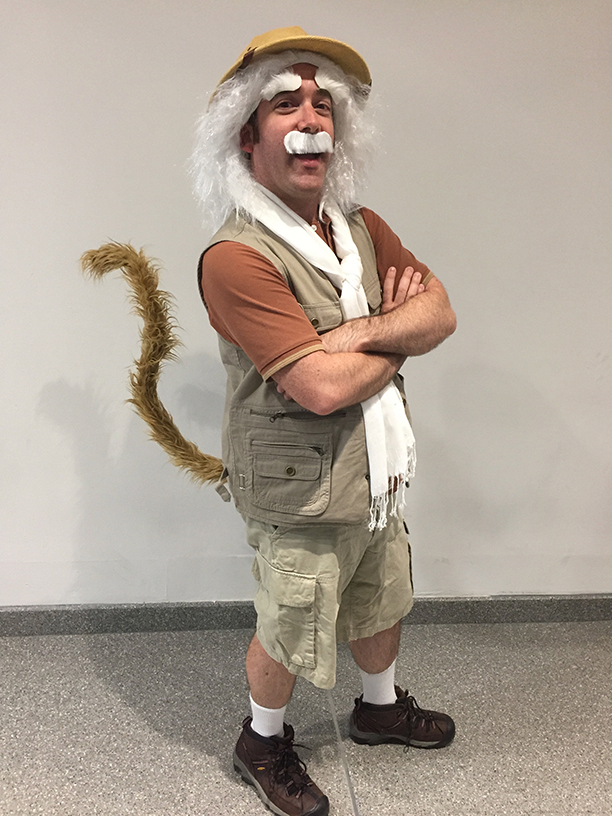 First off, I’m legally obligated as a Muppet blogger to show off my cosplay for this year’s Con.  Yes, that’s me as Uncle Traveling Matt from Fraggle Rock.  I gotta say, I’m pretty proud of how it came out, even though only an extremely small number of people recognized who I was supposed to be.  Those lucky folks received postcards (without having to dig through anyone’s trash) with Matt’s account of how he sees New York Comic Con.

(Extra special thanks to David Valentine Puppets for building that excellent tail!) 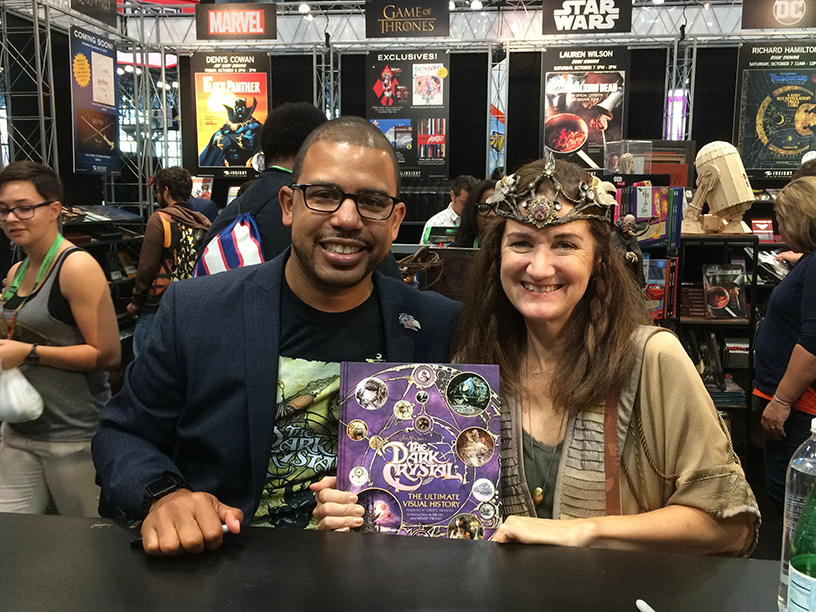 Caseen Gaines, author of “The Dark Crystal: The Ultimate Visual History”, was at the Con to sign his book along with Cheryl Henson.  Sadly, we weren’t able to stop by while they were signing, but not-so-sadly, we learned that the booth sold out of the book!  It’s a hit! 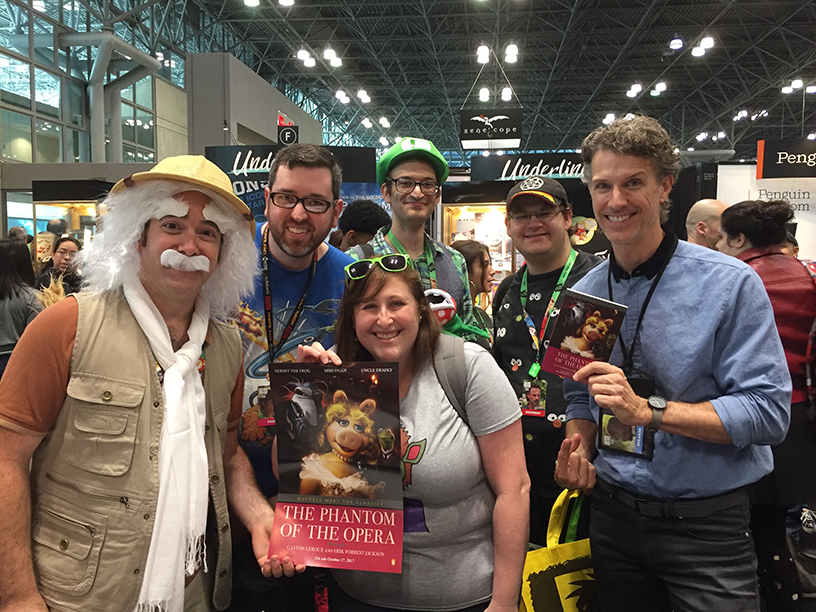 Here’s your ToughPigs crew along with Erik Forrest Jackson, author of “The Muppets Meet the Classics: The Phantom of the Opera”!  Jackson was a super nice guy, and just as big of a Muppet geek as us.  He was signing copies of the book and poster, and talking about how much he loves obscure Muppets like Mr. Poodlepants.  Or, at least that’s what he talked to us about.  I can only assume everyone who stopped by got the same. 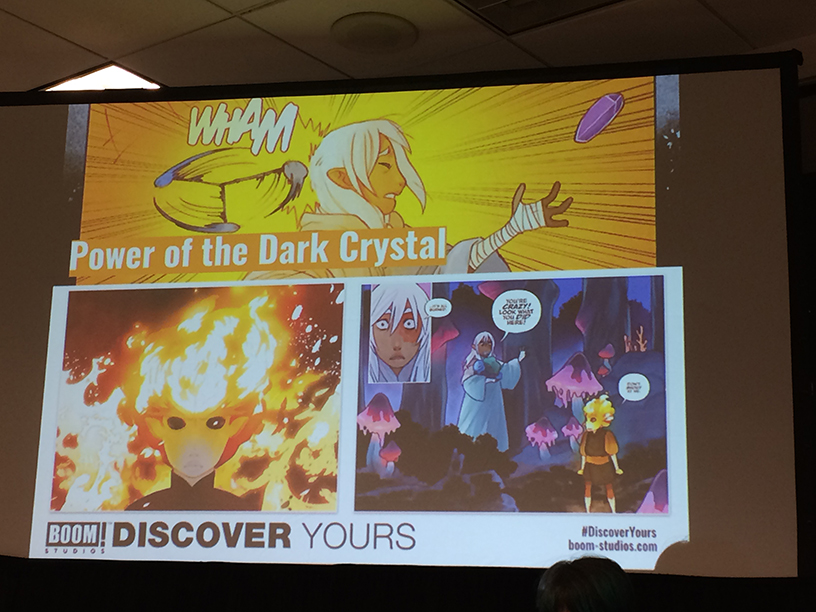 At the BOOM! Studios panel, Simon Spurrier briefly discussed his work on the “Power of the Dark Crystal” comic book. Growing up, Spurrier loved the movie growing up, calling it a world as “seen through the eyes of a child.” In preparing to work on the series, he got to look at the unused screenplay from when it was planned to be a feature film, calling it “basically unfilmable.” In essence, the comics have become the chance to tell this story, and Spurrier has relished the chance to bring it to life, calling the project an “exercise in wonder.” 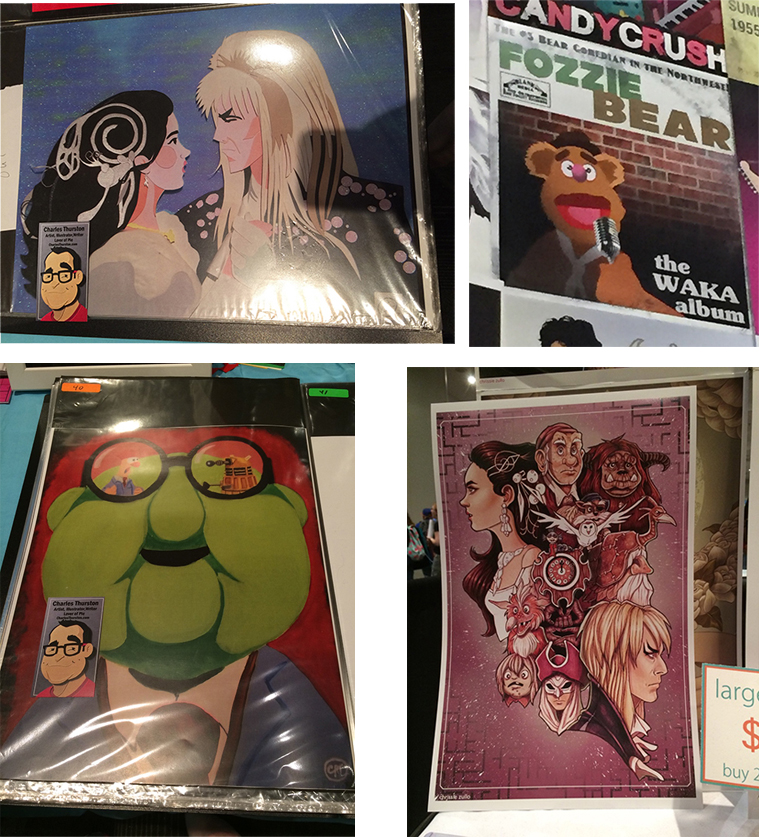 One of the most satisfying parts of Comic Con is seeing artist interpretations of the Muppets in their work.  Above, you’ll see a few of those, with art by Charles Thurston, Drew Blank, and Chrissie Zullo. 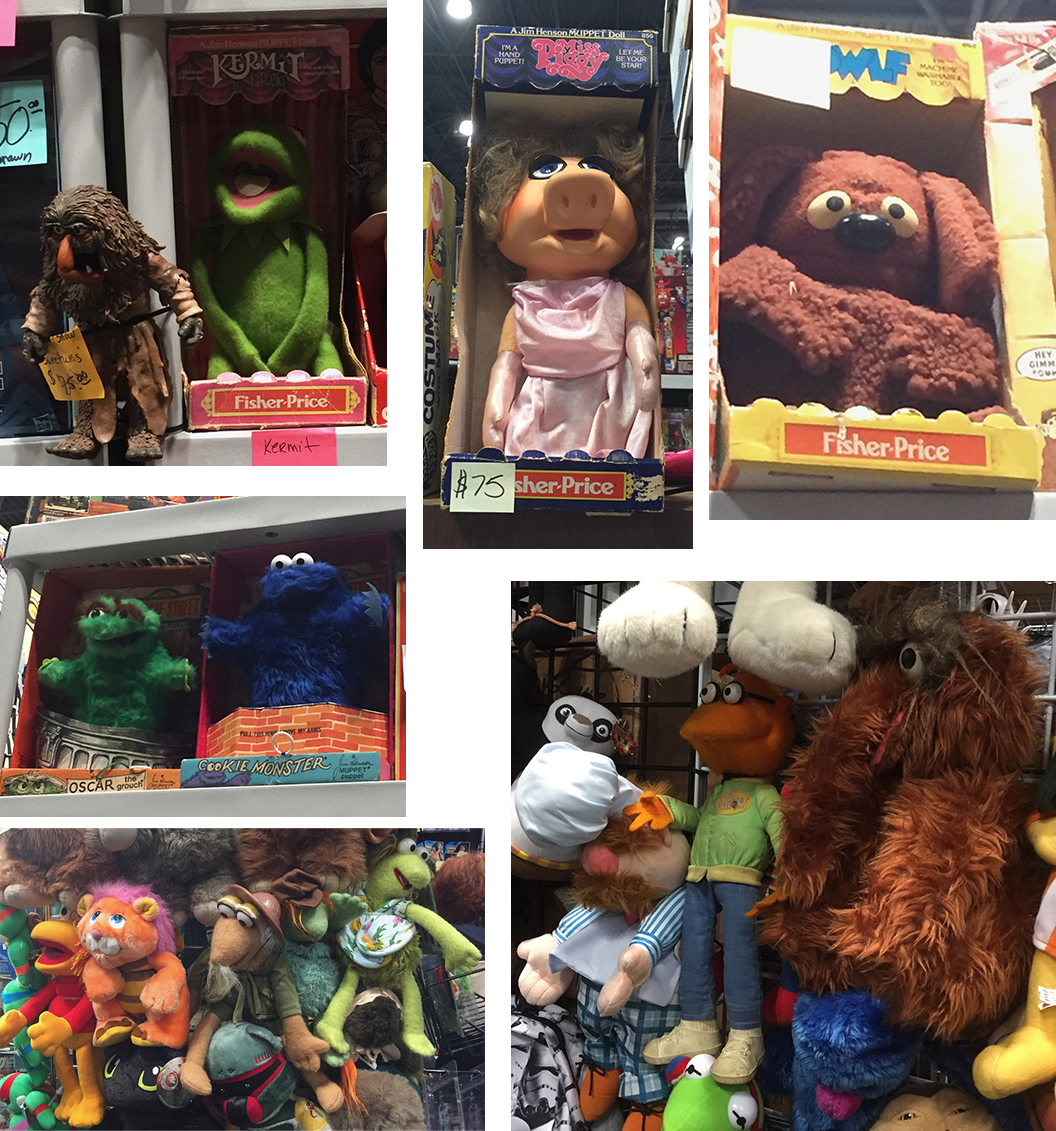 We also really love searching for vintage Muppet toys.  And there were a ton this year, including the ones seen above.  I admit, I came close to shelling out some serious cash for the Rowlf doll (still in the box!) and the Traveling Matt (I mean, I was dressed as the guy).  Unfortunately, my wallet won out over my heart’s desire.  Sigh. 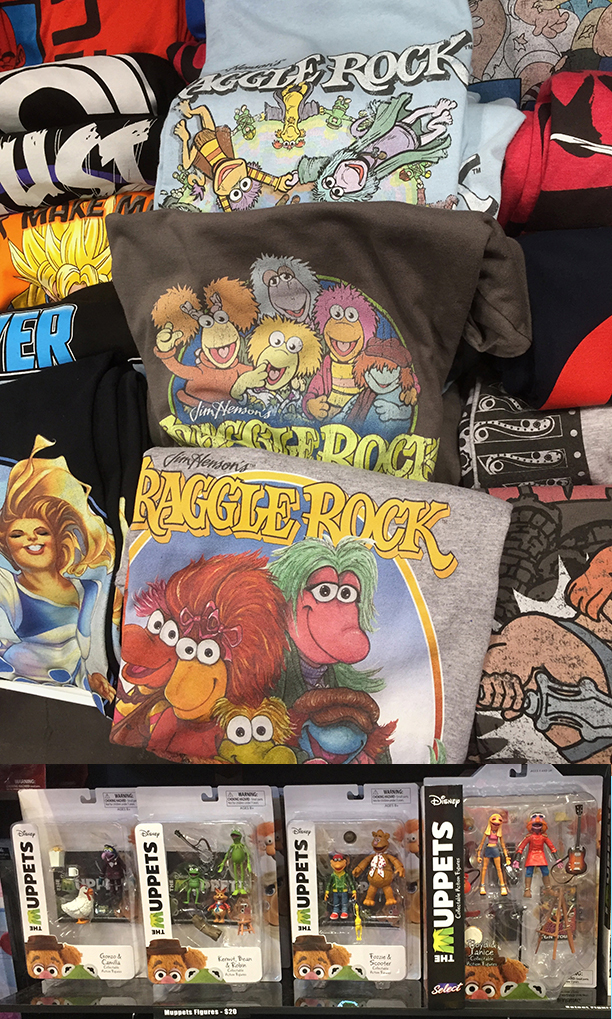 There was some new merch as well.  For example, some Fraggle Rock t-shirts, and the recent Diamond Select Muppet action figures.  Speaking of which, Diamond Select held a panel of their own, and while they didn’t offer any new, concrete information, Marketing Supervisor Zach Oat did concede that despite the Muppets line not being a huge seller, demand for the Statler and Waldorf figures exceeded expectations, prompting to do a second production run on the figures. It may not be terribly encouraging, but it does suggest that with better sales, there could be more of an impetus to produce more figures. 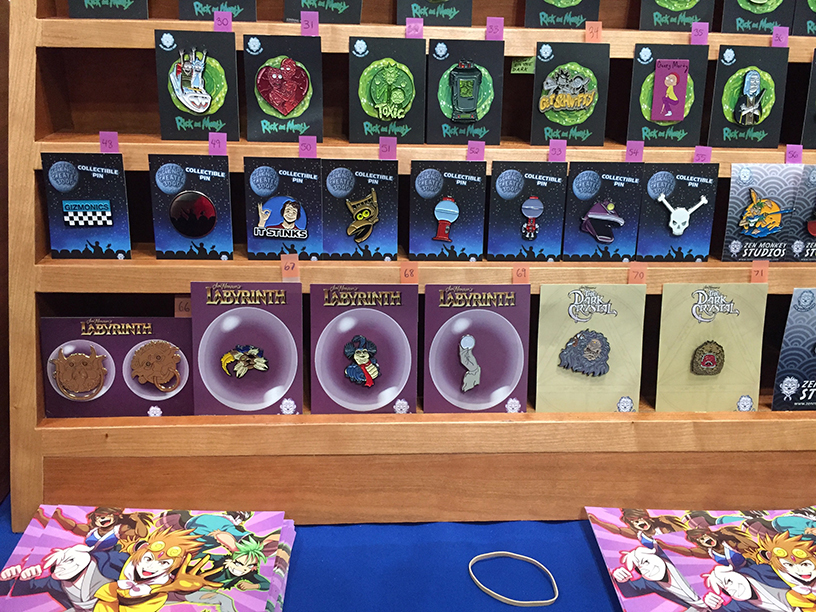 The folks at Zen Monkey Studios have been doing great work recently with their Rick and Morty merchandise, leaving not a whole lot of room for their Henson properties.  So while they didn’t have any apparel with Fraggles, Skeksis, or Ludo monsters on display, they did have a few choice pins for sale. 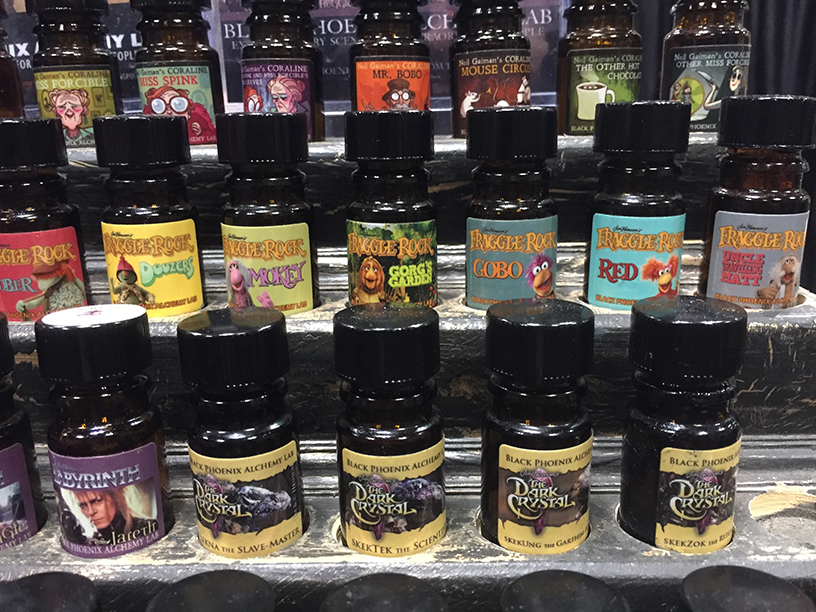 The strangest Henson tie-in we saw was over at the Black Phoenix Alchemy Lab booth, where they were selling scents based on Fraggle Rock, Labyrinth, and Dark Crystal.  Put them all together, and it smells like Marjorie, the Trash Heap! 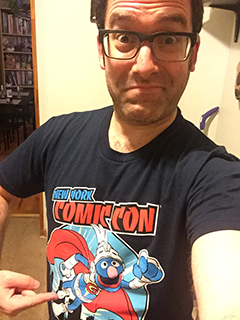 It’s rare that New York Comic Con will have a Muppet-related exclusive, so I jumped at the chance at owning my own Super Grover NYCC shirt.  This thing was only available at this year’s Con, and it sold out.  So I guess I’m wearing it every day for the rest of my life now. 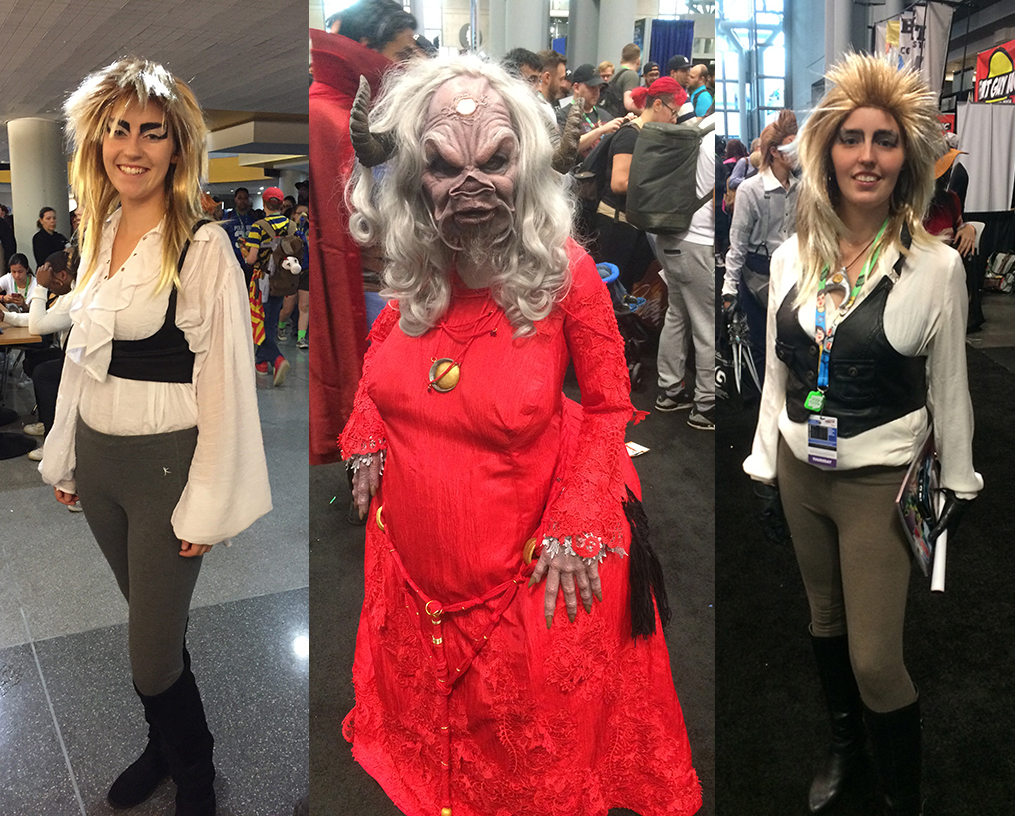 But really, the best part about Comic Con is the cosplay.  For example, the Henson cosplayers, dressed as Jareth, Aughra, and Jareth. 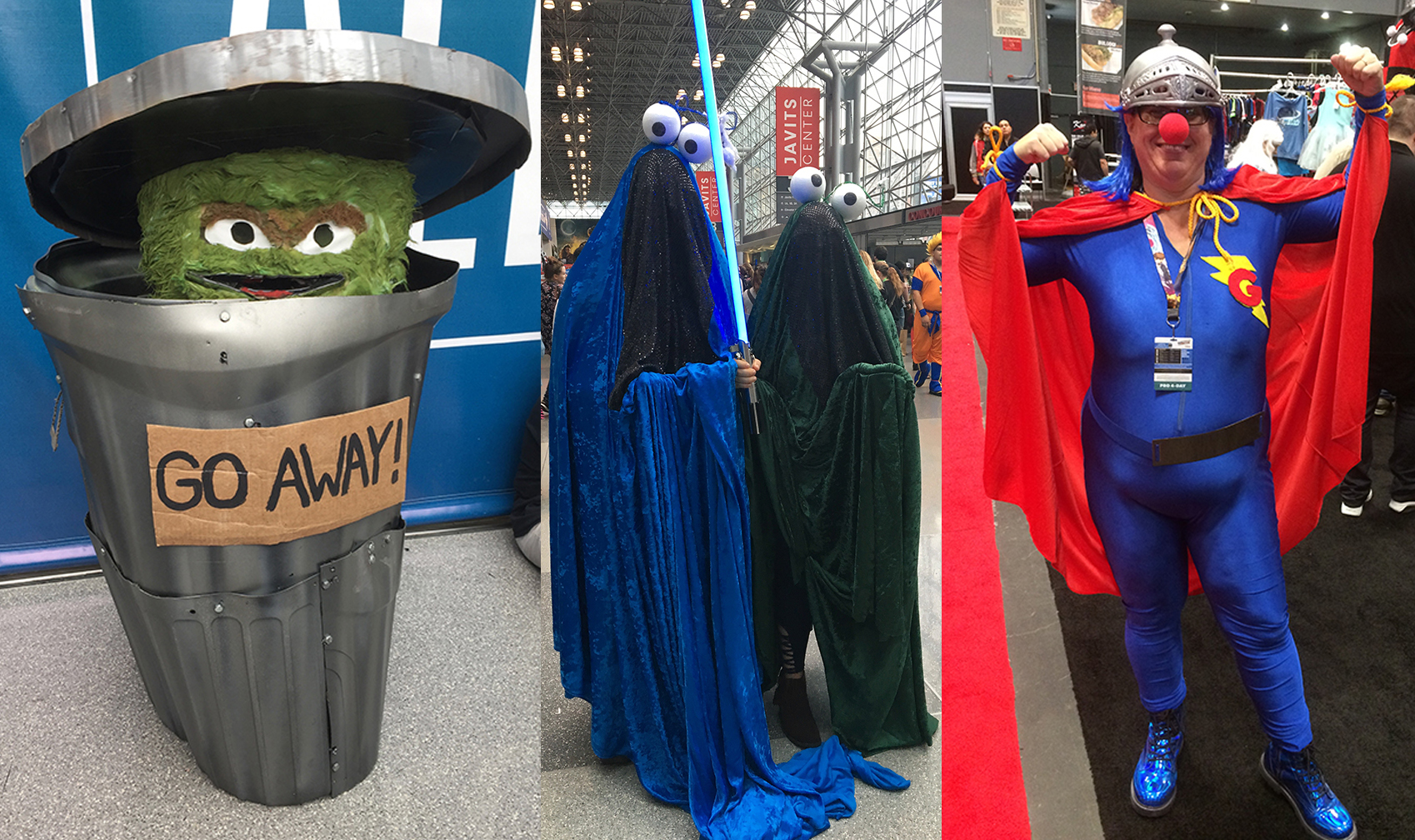 And these Sesame Street cosplayers!  I especially liked this Oscar, who hid in his trash can, only to emerge to tell comic book lovers to scram. 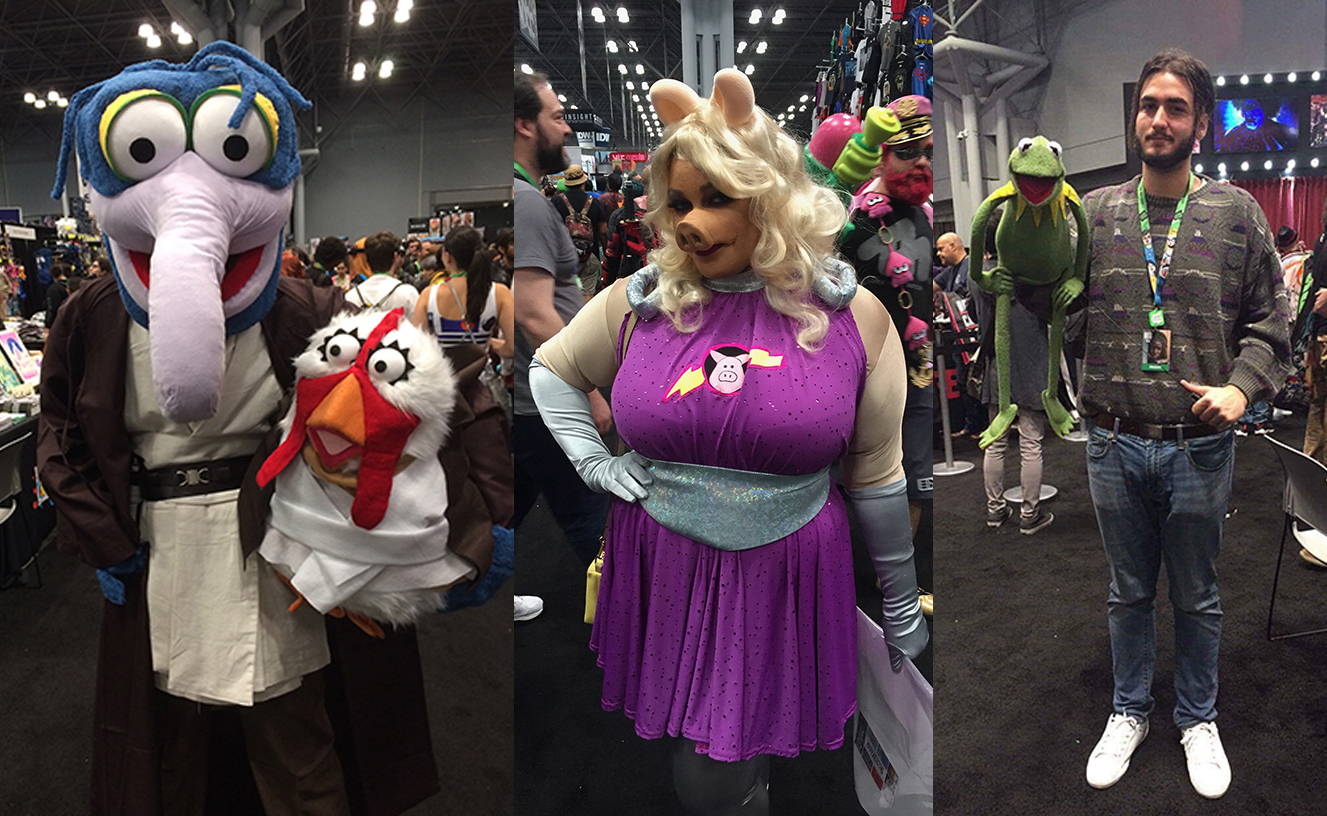 Finally, these Muppet cosplayers tackled Jedis, pig astronauts, and Jim Henson himself.  Put them all together, and you’ve got one hell of a summer blockbuster.

Thanks to New York Comic Con for providing another weekend full of fun geekery and nerditude.  Here’s hoping there’s even more Muppet presence next year!

Click here to hand out postcards on the ToughPigs forum!

by Joe Hennes (with extra material by Matthew Soberman)