Many thanks to our correspondents for this year’s New York Comic Con coverage: Joe Hennes, Ryan Roe, Matthew Soberman, Dave Hulteen, Staci Rosen, Sarah Elizabeth Grace, and Louie Pearlman!  How many Muppet fans does it take to write a Comic Con article…?

Another New York Comic Con is over, and your ToughPigs crew had an amazing time taking in the panels, checking out the cosplay, buying up some artwork, and keeping an eye out for all the Muppet-related stuff NYCC had to offer.

Despite the fact that it was a light year for Muppet stuff, we still caught a whole bunch of cool things to share with you all.  Let’s recap!

First off, we shot a short video interviewing some cosplayers and celebrities about the Kermit/Piggy breakup.  Needless to say, superheroes have some strong opinions on the matter.  Take a look:

Speaking of cosplayers, we saw some awesome Muppet, Sesame, and Henson costumes at NYCC.  Here’s just a sample of what we managed to capture on our cameras, including some beautiful Miss Piggies, a couple of bizarre Kermits, a few Jareths, and more. 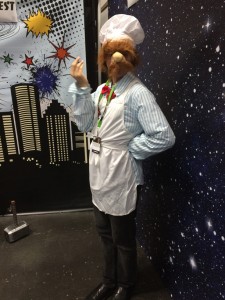 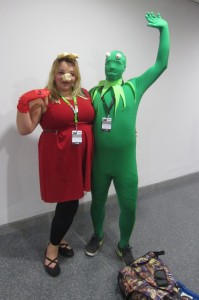 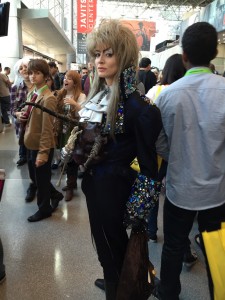 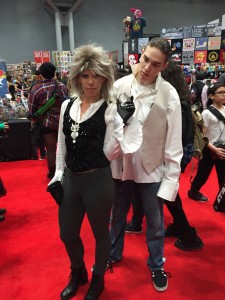 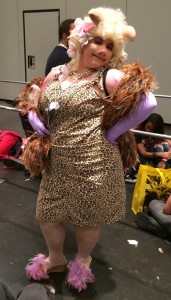 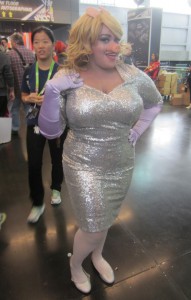 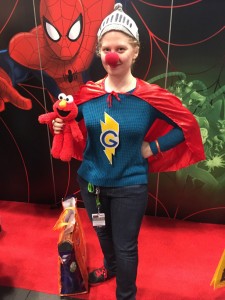 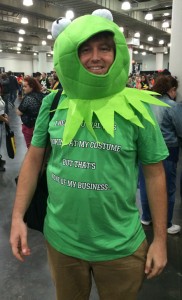 I also have to call out two insane cosplayers.  First, our friend Sam, the young puppeteer responsible for The Mo Show on YouTube, did the unthinkable and cosplayed as ToughPigs co-owner Joe Hennes!  That’s the craziest, most flattering thing ever!  Next year, I fully expect to see more Joes than Deadpools at NYCC. 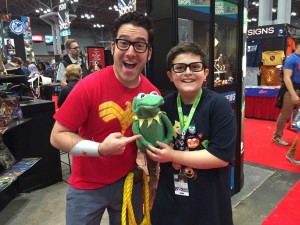 Also, these two gentlemen were floating around Comic Con on Saturday, terrifying everyone who saw them, ruining countless childhoods.  They even made one little girl cry.  How do we know this?  I’m not going to say that we know one of the cosplayers, but we sure are insinuating that we do.  Or that one of our ToughPigs staff is in one of those costumes.  Or not!  Or yes!  Probably maybe! 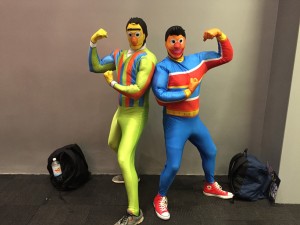 On Thursday night, we hosted another Muppet Vault in conjunction with NYCC’s Super Week.  We screened a mix of pop culture, sci-fi, and superhero Muppet clips, as well as the Star Wars episode of The Muppet Show.  We gave away a few copies of Sesame Street’s Numeric Con DVD, and everyone who attended got a free poster!  Yay for stuff! 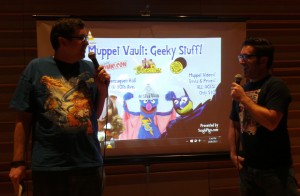 Although there weren’t any official Muppet/Sesame/Henson panels this year, we still caught enough to satisfy our Muppet hunger.  Here are a few that we managed to attend:

How to Be a Professional Puppeteer with Noel MacNeal took place in the “Family HQ” room.  Somebody at  Comic Con had the bright idea to devote a room to family-friendly panels, and rather than the typical rows of seats, to fill it with beanbag chairs.  They were comfortable enough, if not particularly dignified.

After quickly reeling off his résumé, to the delighted gasps of the audience (Sesame Street!  Eureeka’s Castle!), Noel MacNeal gave a crash course on how anyone can easily be a puppeteer.  If you’ve wiggled a stuffed animal, a doll, or an action figure, you’re already a puppeteer!  It was pretty clear MacNeal had given the same presentation before, as the whole thing went by at a brisk pace — but without ever seeming too rushed.

The gist of the demonstration: You have a puppet that you carry around with you every day, and it’s called your hand.  When you put your hand inside a puppet, choose a voice for it, and perfect your lip-synching skills, you’re a puppeteer!  (And of course you can learn all about how to make your own puppets at home from his book 10-Minute Puppets.)  The event concluded with MacNeal, his son Mattie, and puppeteer & builder James Wojtal bringing up audience volunteers and distributing puppets to them.  At that point, MacNeal’s dog puppet led the group in a call-and-response sing-along of “Sing After Me.”  Among the puppets taking part was a big, awesome monstery guy built and performed by Wojtal.  Good times! 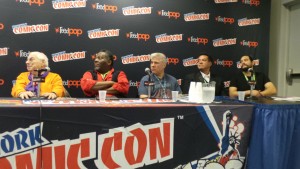 NYCC also had its fourth annual Creatively Energizing Young People With Comic Books and the Arts panel, which this year had a good portion of its time devoted to Jim Henson and his impact. former Jim Henson Legacy director Arthur Novell talked briefly about the permanent Henson exhibit set to open next month at the Center for Puppetry Arts in Atlanta, Georgia. The exhibit will feature more than 150 puppets, with a large number of those having never been on public display before. After that, Noel MacNeal talked about working on a secret panel of Henson employees past and present to help create the Henson exhibit coming to the Museum of the Moving Image in Astoria, New York. According to MacNeal, the exhibit will have several opportunities for guests to try their own hand at puppeteering in the Henson style, and the displays will change as guests progress through the exhibit, going from black-and-white for Jim’s early years before transforming into color with the creation of Sesame Street. The panel would keep referring to Henson and his impact throughout the panel, as panelist Alex Simmons telling a story from his acting days, where he worked as an extra in The Muppets Take Manhattan. Stories about Henson’s need for creative collaboration and desire to never look back for too long and keep moving forward enhanced the discussion about how to get young people engaged with creative expression. 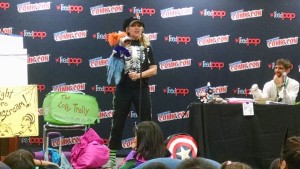 Another family-friendly session in the beanbag room!  Lolly Lardpop’s NYCC Playdate with Leslie Carrara-Rudolph showed everyone how to combine voice, body, and imagination to create characters and tell stories. In addition to Lolly and herself, Carrara-Rudolph played a surfer dude, and, when she put a magic tutu on her head, a strange gypsy woman.  And throughout the whole thing, she was accompanied by a mummy sidekick named Munster.

Highlights of the playdate included Carrara-Rudolph’s insanely entertaining one-woman retelling of The Wizard of Oz, and an advance look at her upcoming book, The Night Before HallowScream!  The event was packed full of audience participation — though, as Carrara-Rudolph noted, the grown-ups seemed more enthusiastic about acting out various scenarios on command than the little kids, who mostly just kind of sat there  Anyway, everyone who had fun had a lot of fun.

With a new Muppet series on TV and arguably as popular as they have been in years, Muppet artwork was out front and center in Artists Alley this year.  We caught a lot of new and interesting stuff, some of which we’re saving for later fan art spotlights, a select few of which you can see right here: 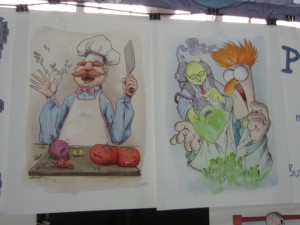 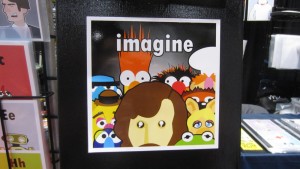 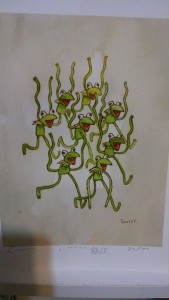 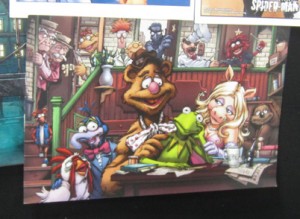 The highlight of the Muppet merchandise at this year’s NYCC came from Diamond, which will be releasing a series of Muppet Select action figures, Minimates, and tumblers!  The toys were on display, and we got to see them live an in person. 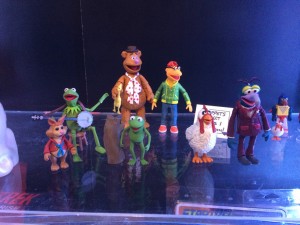 The Muppet figures look gorgeous.  The sculpts are great, they have a lot more articulation than the Palisades toys, and best of all, they’ll be diving into the archives with characters like Bean Bunny, who has been sorely underrepresented when it comes to merchandise. 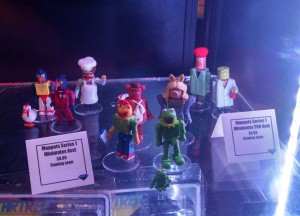 If the previous action figures are too much for you, the Muppet Minimates may be right up your alley.  Not quite LEGO minifigs, but just as collectible, these little guys look a lot better in person than they do on your computer screen.  With thousands of Muppet characters out there, I can see this line getting pretty big, and I’d need them all. 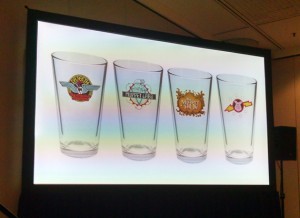 In addition to the toys, Diamond announced a set of Muppet-themed tumblers, which should be a lot of fun to drink out of while watching The Muppets on TV. 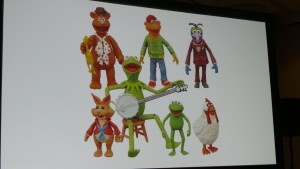 Diamond had their own panel, which was considerably lighter on Muppet stuff than it was on Batman stuff, but it was still exciting to get an early look at the Select Muppet figures.  Moderator Zach Oat noted that the Muppet toys are intended to be to scale with the other Diamond Select toys — in other words, Fozzie should be about as tall compared to Batgirl as the real Fozzie would be compared to the real Batgirl.  Kermit will come with his banjo, as well as Robin and Bean Bunny (Yes, Bean Bunny!), Gonzo will of course come with Camilla, and Fozzie will come with his “Simon Smith and the Amazing Dancing Bear” duet partner Scooter. 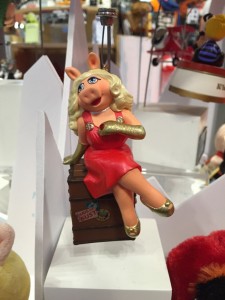 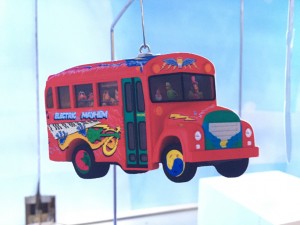 Meanwhile, over at the Hallmark booth, this year’s Muppet ornament – Miss Piggy – was on display.  Also a sneak peek at next year’s Christmas ornament – the Electric Mayhem Bus!  This was just a cardboard mockup, but we look forward to buying it in 2016 to help make Hallmark that much more mellow and profitable. 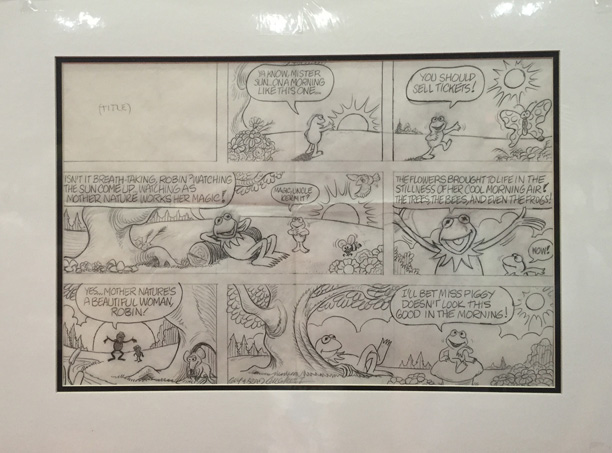 This right here was possibly the coolest bit of vintage Muppet merchandise at the con – an actual sketch of the Muppet comic strip drawn by Guy and Brad Gilchrist!  A wonderful piece of Muppet history, with what I imagine is a rather hefty price tag.  Well worth it to whoever hopefully bought it. 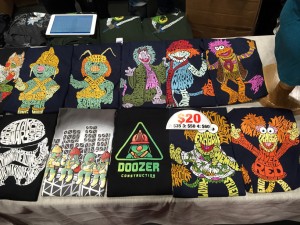 The folks at Zen Monkey Studios were back with their typography Fraggle Rock shirts, with a few more in their arsenal, all Doozer-themed!  Finally, Cotterpin Doozer gets the apparel she deserves. 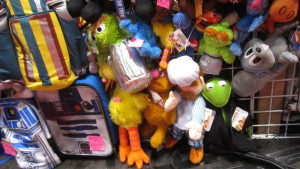 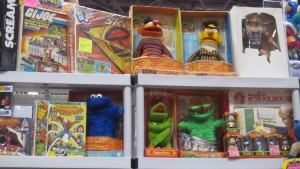 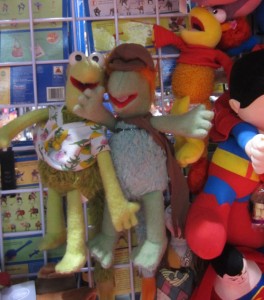 Of course, there was lots more vintage merch to be seen.  Old Fraggle dolls, Sesame Street puppets, and more littered the retail section.  There were definitely a lot of opportunities to expand your collection if you happened to have the cash to prove your devotion to the all-important Brand.

And that’s it for this year’s New York Comic Con coverage!  We’re always so sad to see it end, but grateful to have geeked out with the rest of New York City.  Let’s do it again next year, gang!

Click here to dive deep into fandom on the ToughPigs forum!