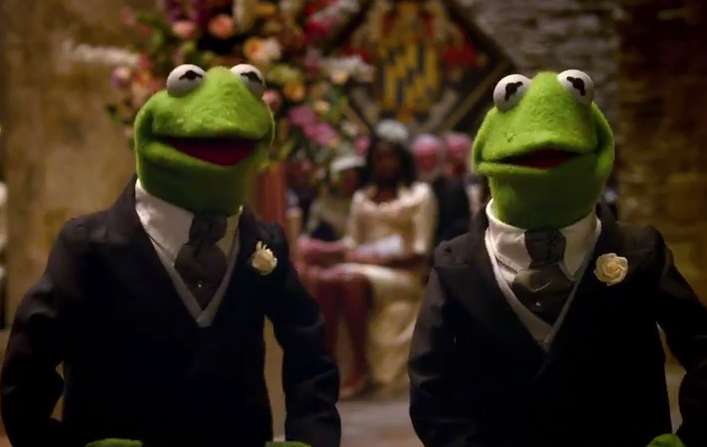 The Seattle Seahawks scored the most points in the Super Bowl last night, but as many fans have noted, the real winners of the day were the Muppets.  We already knew there was going to be a commercial for the Toyota Highlander starring our favorite celebrity spokespersons, but there were a few surprises as well.

For one thing, the half hour or so when the FOX Sports guys talked about the game before the kickoff was called “The Muppets Most Wanted Pregame Show.” Sponsored, as the announcer so helpfully informed us, by Disney’s Muppets Most Wanted.

“The Muppets Most Wanted Pregame Show!” Honestly, did you ever expect to see a Muppet movie sponsoring even a small portion of the biggest TV event of the year?  The next time anyone complains that Disney doesn’t do enough to promote the Muppets, I’m going to take a good, long look at this image before I agree with them: 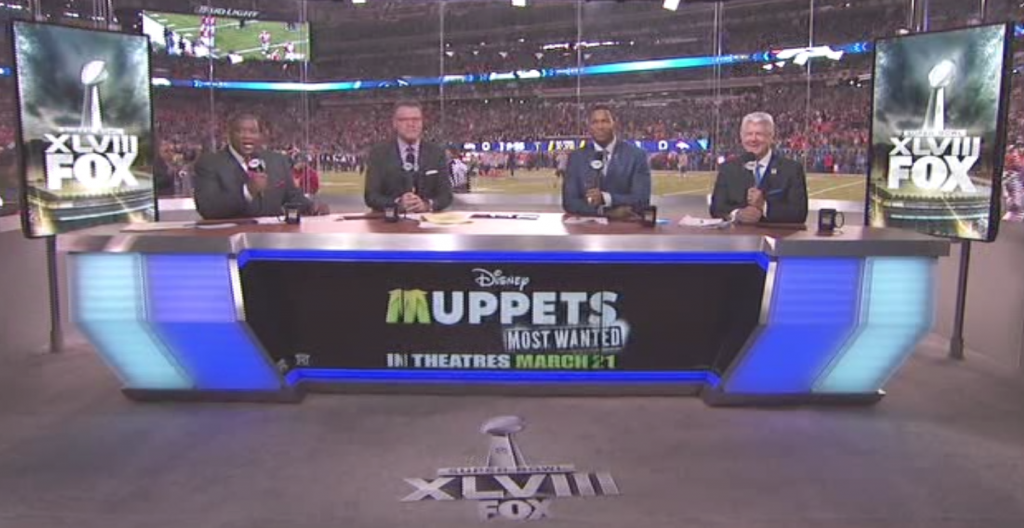 Unfortunately, a pregame show sponsored by Muppets doesn’t actually mean the Muppets will appear. I was really hoping to see Kermit or Piggy pop up with one of those FOX microphones to make some game day predictions. Or jokes.  Jokes would be good too. But we got the next best thing: New versions of the Muppets Most Wanted TV commercials!  These were ever-so-slightly different than the ones we’ve already seen, so of course they were extremely exciting.  Here’s the one they’re calling “Game day ad”:

And here’s a game day extended version of the Twitter quote spoof ad that’s been online for a while.  Oh, but check it out — the new version on YouTube has a little surprise twist at the end.

In case you missed it, our pal Chris Stulz of the Muppet Stuff blog showed some true dedication to the Muppet cause by editing and uploading all the moments from the pregame show where the word “Muppets” was onscreen:

So then there was some football and stuff, and some other, non-Muppet commercials.  Then, around 7:55 PM Eastern time, it was the moment we’d all been waiting for.  The Toyota Highlander “No Room for Boring” commercial aired, and it was just as entertaining on my television as it had been on my computer.

As of this writing, the commercial is up to 6,764,845 views on YouTube, so I guess it made a pretty good impression.  But don’t you wish there was a Spanish version, with different Muppet stuff and without Terry Crews?  Well, check this out:

Man, Bunsen’s Spanish voice is so goofy. A few fans have reported spotting these two ads in English, so fingers crossed that they’ll end up online soon.

Anyway, my original plan was to keep an eye on what people were saying about the commercial on Twitter after it aired, so I could include some quotes here. But less than one second after the commercial ended, Twitter was flooded with thousands of tweets containing the word “Muppets,” which came in so fast that I couldn’t even read most of them.  From what I saw, though, the vast majority of them were enthusiastic and positive. There was a lot of “Now I want to buy a Highlander!” and “I can’t wait for the Muppets’ new movie to come out!” and “The Muppets should be doing the halftime show instead of Bruno Mars!” Some people even used the #NoRoomForBoring hashtag, which is amazing, because who uses Twitter hashtags from commercials?

Which is not to say there weren’t a handful of naysayers.  A few idiots felt the need to let everyone know that they’re, like, totally over the Muppets now, and the Muppets should stop making movies and go away.  A more common sentiment was “The Muppets are in a commercial.  Jim Henson must be rolling over in his grave!”  For a moment, I seriously considered staying up all night replying to every single one of those tweets to explain that the Muppets have been doing commercials as long as they’ve existed, and even the Muppet Show characters did commercials for Polaroid and American Express during Jim’s lifetime.

So all of that Super Bowl stuff was very exciting.  But the excitement wasn’t limited to the NFL game.  The Muppets also showed up at the Puppy Bowl, Animal Planet’s annual adorable counterprogramming event.  Here’s an interstitial that showed up on Animal Planet, featuring a few characters you probably never thought you’d see playing football together:

And here’s are two more Muppetful spots (captured and uploaded by our pal, the Muppet Mindset’s Ryan Dosier!):

The Disney and Toyota people really scored a touchdown when it came to social media, before, during, and even after the big game.  When the Highlander commercial was posted a few days before the game, Miss Piggy reacted to the fact that she had been left out of it: 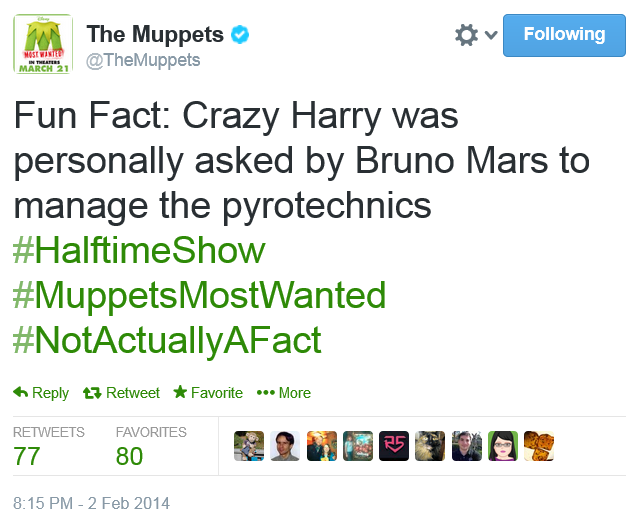 And they tweeted links to the videos that popped up on YouTube a few days ago, featuring the Muppets attempting to drive to the game:

Meanwhile, Toyota went a little crazy on Vine.  As seen in those YouTube videos, Pepe made himself a “Highlander lounge” in the back of the vehicle. The lounge became the setting for a series of Vines, starting with this one:

Later, Pepe offered some extremely helpful advice to the players:

And showed them how to do a touchdown dance:

He attempted to order a pizza:

And taunted the players:

Once the game was over, in an apparent Puppy Bowl crossover, Pepe interviewed the “real MVP” of the day:

So that was a lot of stuff for Muppet fans to be happy about on Super Bowl Sunday.  Any Muppet fan who also roots for the Seahawks must be dancing in the streets today. Both of your teams did great!

Did I miss anything?  Let me know, and I’ll add it to this post!

Click here to score a marketing touchdown on the Tough Pigs forum!

Don’t Make “The Muppet Show” Again, Make This Show Instead