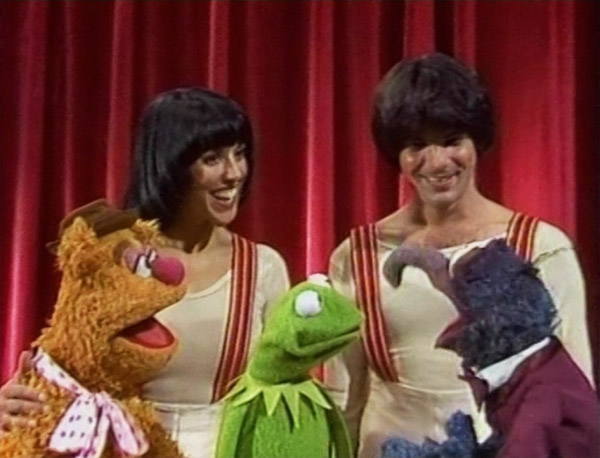 There are many reasons The Muppet Show struck a chord with audiences, but one reason was especially high on the list: Watching guest stars play with Muppets.

Many of the most entertaining moments on The Muppet Show involve the guests’ interactions with the Muppets. A guest star might sing with a Muppet, or sing to a Muppet, or engage in witty dialogue with a Muppet, or participate in a ridiculous sketch with some Muppets. Shields and Yarnell don’t really do any of those things.

The Muppet Show writers were great at highlighting their guest stars’ talents, and Robert Shields & Lorene Yarnell’s big talent was mime, so that’s what they do. First, the Muppet Theater audience watches as they do one of their trademark “robot” bits, with just the two of them in the spotlight. Later, Gonzo asks them for suggestions for a new act, and watches as Shields mimes playing the piano. In another sketch, Beauregard plays the role of a bartender in the old west and watches as Shields and Yarnell ham it up as cartoonish cowboys. And in the closing number, a stage full of Muppets watch as Shields pretends to be various animals and Yarnell tap-dances. 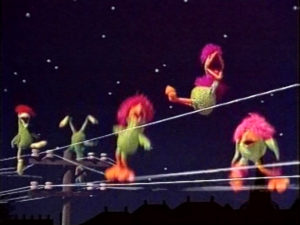 MVM (Most Valuable Muppet): Fozzie, without question. The backstage story finds the bear trying to come up with his own mime act. To his dismay, no one is very enthusiastic about his “watching turtles play tennis” or “feeding an elephant spaghetti.”

Musical Highlight: “Take a Chance on Me,” a joyful and high-energy performance of the ABBA hit. Presumably the writers started with the lyric about being “first in line,” and ran with it, for a number featuring birds bouncing up and down on telephone lines. The effect is flawless – there’s no trace of the puppeteers, and hearing the song sung by colorful Muppet birds absolutely improves it. 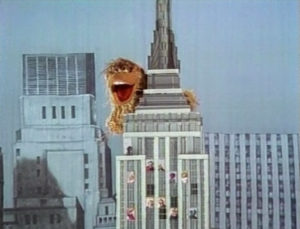 Coolest Puppetry Effect: Or second-coolest after “Take a Chance on Me,” and perhaps more of a cool television effect, but… In the number “It’s Lonely at the Top,” sung by a giant gorilla atop the Empire State Building, backup vocals are provided by Whatnots in the windows, who appear appropriately tiny in proportion to the gorilla. And their voices are high-pitched, like chipmunks! I’m not quite sure how they did it, even after seeing a behind-the-scenes photo on Muppet Wiki.

Obscure Character Watch: The crowd of Muppets in “Make ‘em Laugh” includes Leo from the “Muppet Meeting Films”… and Hilda, the wardrobe mistress from season one! Nice to see you, Hilda!

One More Thing…: During Kermit’s opening remarks, there’s a gag where Scooter falls into the orchestra pit, and then the tuba blasts him through the air and into the curtain. Had we ever seen Scooter’s whole body before this?

Okay, One More Thing…: Shields and Yarnell’s “Robots Having Breakfast” sketch really is excellent. Their movements are completely convincing, years before “I am a robot” became a common act for street performers. Just look at those silly mechanical people spilling orange juice on themselves and stuff!

Click here to ham it up as a cartoonish cowboy on the Tough Pigs forum! 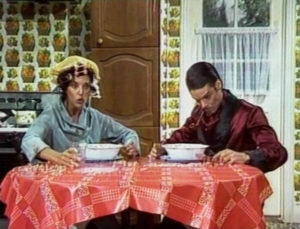