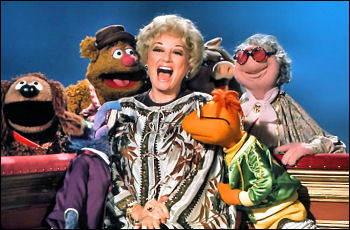 Who doesn’t love Phyllis Diller? People who don’t love joy, life or funny women: that’s who! Her appearance on The Muppet Show doesn’t have a lot of classic Muppet moments, but it showcases Diller’s talents admirably. A groundbreaker in the field of stand-up, Phyllis Diller was one of the first women on the comedy scene, before Joan Rivers, Lilly Tomlin or even Bea Arthur, who always seemed like 1000 years old to me, so Diller being her predecessor is a real feat. The Muppet Show writers are reveling in allowing Diller ample room to shoot her rapid-fire-joke patter through TV screens across the world and right into audience’s funny bones.

This is showcased best with Diller’s opening sketch, set at a piano bar with Rowlf in which the two of them basically make the most Rodney Dangerfieldesque self-deprecating jokes about themselves. Breaking from the format that is prevalent in season one, this is not a song and dance number and the results feel fresh. One of many highlights is Phyllis’ joke “I went to a taffy pull… the taffy won.” This is an excellent example of Diller’s humor melding well with the Muppets’: she often refused to work blue. Under the surface, The Muppets were a more adult act than Diller, and they balance each other out.

Another charming bit is Diller giving Fozzie a bit of advice when it comes to comedy. The jokes don’t really even make a huge impression in this segment, but the idea of Fozzie seeking guidance from a comic he admires is very sweet, and as an insecure Fozzie Bear-like comic myself, I could identify based on lots of conversations I’ve had with other comedians I admire.

That being said, the lack of guest-star singing in this episode is a bit of a let-down. Phyllis Diller definitely wasn’t the best singer The Muppet Show has ever had on, but she still had an effective vocal delivery. She had a turn on Broadway as Dolly in Hello, Dolly! and her collaboration with Pink Martini on Charlie Chaplin’s song “Smile” is beautiful and very much worth a listen. If this episode is lacking anything, it’s a song for Diller to express similar emotion. 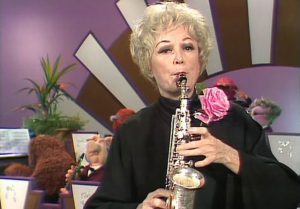 Also, Diller was an accomplished pianist and toured concert halls with classical orchestras from 1971-1981 under the stage name Dame Illya Dillya. It would have been cool to see her duet with Rowlf, perhaps at the end of their sketch together. Instead, we get a closer in which Diller plays a tiny saxophone terribly while being accompanied on Scott Joplin’s “The Entertainer.” Zoot ends up showing her how it’s done, of course! This is all well and good and Muppety, I just feel like it could be stellar and the bit doesn’t quite make it. 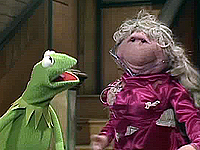 The b-plot revolves around Hilda, the Muppets’ mostly unseen wardrobe assistant attempting to look younger. She dons a wig and cinches her waist, but to no avail: all the Muppets still recognize her as being past her prime. The parallels between Hilda’s struggle with her body image and Phyllis Diller’s outspokenness about her plastic surgeries (groundbreaking at the time) are really impressive. It’s here that the episode shows it’s heart and delves into the deeper issues that Phyllis Diller explored in her career, beyond the self-deprecating jokes.

Overall, this episode has a lot going for it, and that “a lot” is Diller herself. It’s definitely worth a watch to see a legendary comedienne at the top of her game, supported by our favorite fuzzy and flocked band of freaks and weirdos. What more could you want? 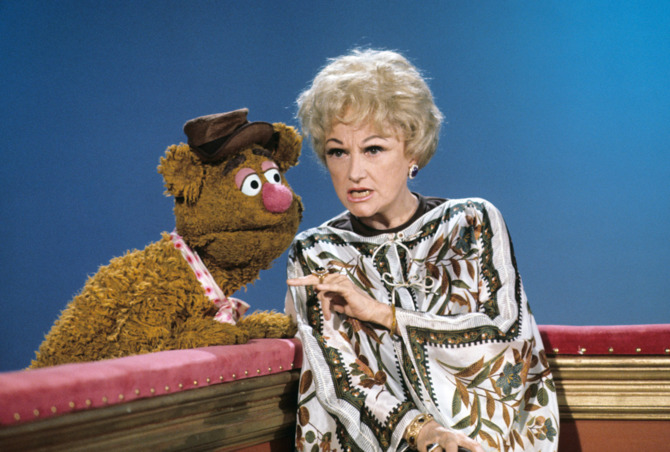 Best Joke: During the Phyllis/Rowlf Sketch: “Someone had given me a white, mink stole. Within a month I had developed black dandruff.” OH PHYLLIS!

Lamest Joke: During the same sketch: “I was in the backyard singing ‘Twinkle Twinkle Little Star,’ it fell on me.” OH PHYLLIS.

Coolest Puppetry Effect: During a goofy number called Hugga Wugga, sung by a bunch of alien Muppets, the title character, Hugga Wugga himself shoots smoke out of his nose whenever any of the other characters sing a song he doesn’t like! It’s pretty cool! 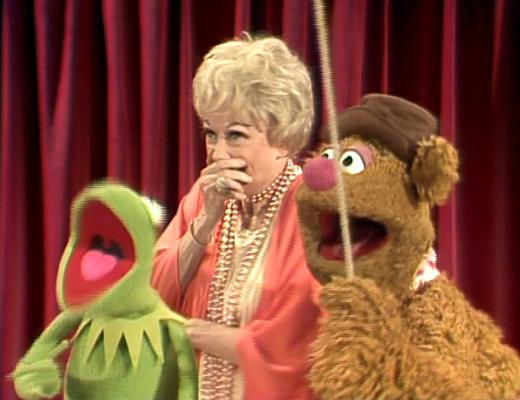 Click here to make a visit to the self-deprecating ToughPigs forum!