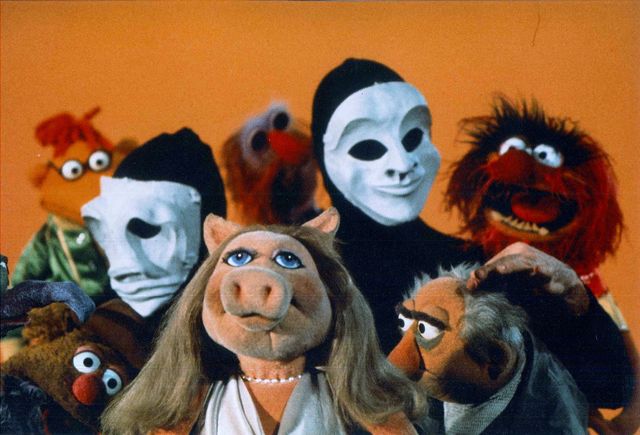 When I volunteered to write about this episode, I’ll admit I remembered very little about the guest stars Mummenschanz: a hip, seventies mime-troupe founded by two Swiss and an Italian-American in 1972. I recall them being kinda fun, kinda quirky and very imaginative, so I thought that they would be a good fit for the Muppets.

Well, guess what fans? I was wrong. I was very, very wrong. This entire episode is a nightmare. Kermit describes Mummenschanz as “distant cousins to the Muppets” in his opening monologue. This statement could not be further from the truth unless he’s talking about mutant-Muppet cousins from the backwoods Mississippi swamp thrown through the centrifuge one-time-too-many. That’s actually a good analogy because there’s a wholly off-putting sketch about three quarters through the episode that features a creepy Muppet machine punching Statler in the face and making him look all screwed-up just like one of Mummenschanz’s TERRIFYING MASKS. AND MUMMENSCHANZ AREN’T EVEN IN THAT SKETCH. 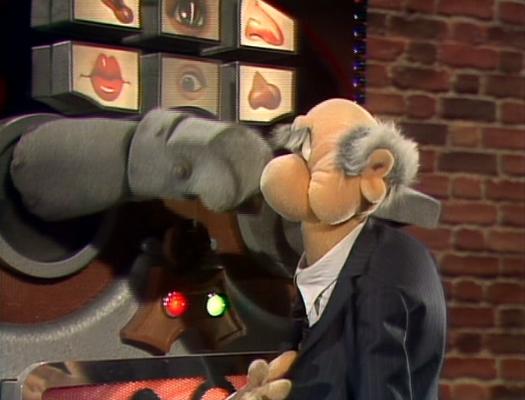 I’m getting ahead of myself here, but where would be a good to start? The very beginning would be great if this were the Julie Andrews episode, but it’s not. It’s Mummenschanz, so I guess I’ll just attempt to dissect all the creepy moments that Mummenschanz perpetrate on this show.

Here goes: first, Mummenschanz do a piece in which the characters’ facial expressions change by tearing pieces of paper off of masks that have drawings on them. It ends with one of the masked characters REPLACING THE OTHER CHARACTER’S MOUTH WITH HIS OWN. Welp,  this is the least creepy thing they do on The Muppet Show and spoiler alert: it’s still pretty creepy. 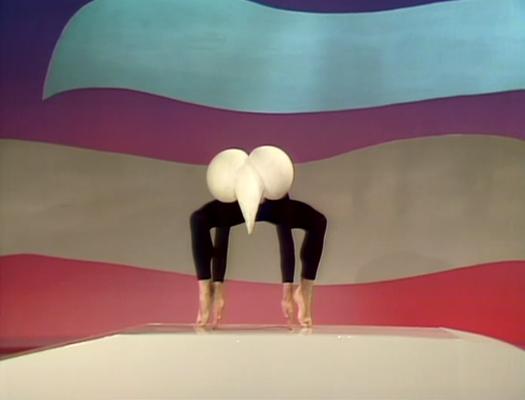 Next, Kermit intros a segment that is supposed to be a little survey of the strange-looking things that Mummenschanz do. Here we get to see Mummenschanz’s notorious “Human Mosquito” number and, uh, you can never unsee it. So yep there’s that.

Mummenschanz rear their ugly masks again for the “talk” segment with Kermit (hah hah). But these nightmare mimes can’t speak, so instead, they blow bubbles in Kermit’s face and their eyes inflate and blow up and a whole generation of kids who grew up in the seventies are lastingly ruined. 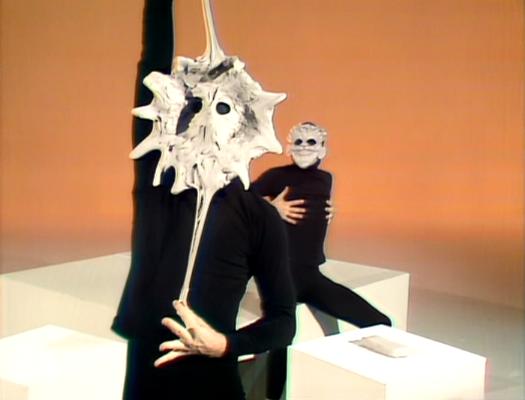 Last but certainly not least, Mummenschanz do their signature number, a delightful little thing in which they’re wearing sculptable masks made out of clay. One member is great at sculpting his face (a sentence I never thought I’d have to write, believe you me), the other is terrible. Well, Mr. Bad Sculpty Face gets pissed at Mr. Good Sclupty Face and they have a face sculpt-off until their faces get mashed together in one big clay-face mess. Ew.

Mummenschanz unmask themselves for the closing goodbyes and it turns out they’re just normal, nice looking people like the rest of us. So why did they have to hide behind these grotesqueries of mask and mime the whole time? This is the question that will plague me for the rest of my days. Confession time Muppet Fans: Mummenschanz left me feeling like I wanted to cry in the shower.

I understand why Jim Henson and his crew would want to feature a celebrated mime theater troupe on their show. Conceptually, it really should work. But in actuality, there seems to be very little that Mummenschanz could build with the Muppets, so their segments feel removed from the rest of the episode, which is disconcerting, to say the least. 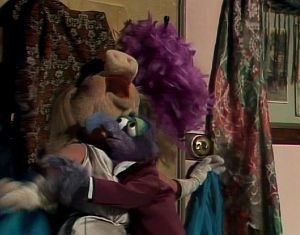 Honestly, though, the rest of the episode is nothing to write home about. Other than an opening number that is a personal childhood favorite (more about that below), this one doesn’t feature our Muppets pals in fighting shape either. In fact, the main plot involves Gonzo professing his love for Piggy and Kermit tricking her into going on a date with Gonzo. It might have been funny in the ’70s, but this whole yarn feels fairly cruel to both Miss Piggy and Gonzo’s core characters. The Kermit on display here isn’t the lovable showman Kermit, or even the frazzled Kermit just trying to hold the show together. This is a Kermit who’s playing a mean joke on Piggy and it doesn’t sit right with me.

But this whole episode doesn’t quite sit well with me, so why would the subplot be any different?

Between Mummenschanz’s weird clay masks and Kermit’s uncharacteristic actions, I’d like to forget that this one ever happened, folks. But, for better or worse, much like many kids in the ’70s I’m sure, I know that’s not going to happen. Every once in awhile, like a strange, masked, human mosquito’s bite, I’ll be seeing the surreal imagery from this episode when I close my eyes. 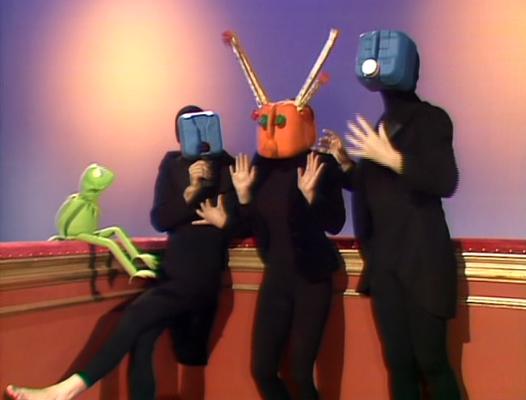 MVM (Most Valuable Muppet): I’m gonna give it to Scooter, based on what you’re about to read below. But the adorkable gopher goes unscathed in an episode where that’s not the case for many of the other Muppets.

Most Classic Moment: So this whole mess of an episode starts with Scooter and Floyd singing Johnny Cymbal’s 1963 hit, “Mr. Bassman.” Featured on the original Muppet Show cast album, this is an absolute catchy gem-of-a-song and a childhood favorite of mine. You can still catch me singing it from time to time. It’s a great Muppet number that should have a better episode built around it than this.

Most Dated Joke: The treatment of Miss Piggy in this episode shows that the Muppet writers and performers were still figuring out how to use the character. Piggy as a lovelorn fool does not read as funny as it did in the ’70s. The pig has changed for the better over the years.

Coolest Puppetry Effect: Are the mushy clay masks a puppetry effect? No? What’s that? Never mention them again? OK! MY PLEASURE. 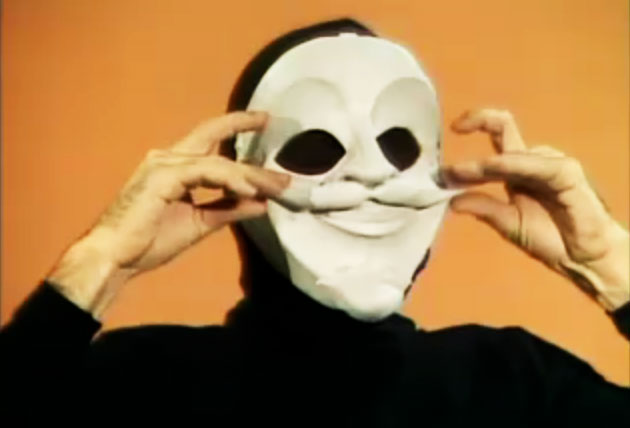 Click here to have clay-sculpted nightmares on the ToughPigs forum!