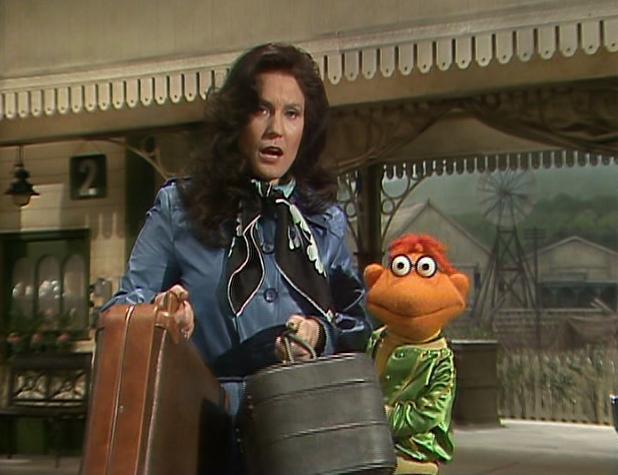 The answer to this question is apparently “the train station.” The Muppet Theater is being fumigated, so the entire episode is performed at a train station. This is set up during the cold opener, which leads into a special version of the theme song performed on this new set, complete with new lyrics about the situation. From this moment, it’s clear that this episode is going to be something special. 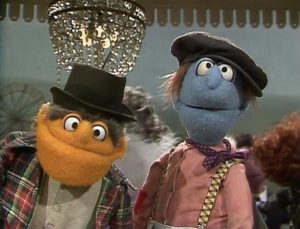 Having decided to move the show’s setting for the first time ever, Jerry Juhl and the writers milk the premise for all its worth. All of the sketches feel like standard Muppet Show sketches, but they have jokes specific to this week’s weird detour. Piggy’s “All Alone” number is interrupted by people rushing to get on a train. Fozzie’s long, elaborate joke is drowned out by the sound of a passing train. Two train-hopping hobos provide metacommentary on the jokes during “At the Dance.” The gag should run out of steam (pun intended), but each one is just different enough that they all work. It’s a marvel of sustained nonsense, and it’s one of the most daring things they ever did on The Muppet Show. 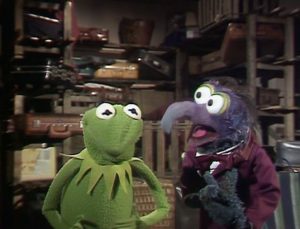 Most daring of all is the episode’s treatment of Kermit, who seems embarrassed over the entire idea of doing the show from a train station. It’s bad for Kermit, but it’s good for us, because this is one of Jim Henson’s best performances. He gets to play moods that we’ve never seen from Kermit before. The frog comes across as frazzled and nervous during the intro. He’s annoyed with Gonzo for booking them at a train station – even turning to the camera and saying “This is never going to work!” He’s always in control at the Muppet Theater, so it’s startling to see him so shaken like this.

Kermit’s relationship with Gonzo also gets new shades here. Much like beer for Homer Simpson, Gonzo is both the cause of and the solution to all of Kermit’s problems in this episode. He’s the one who picked out the train station, and he also convinces Kermit to use an “out-of-use” caboose as his office. That caboose, naturally, is actually attached to a train headed for Pittsburgh. 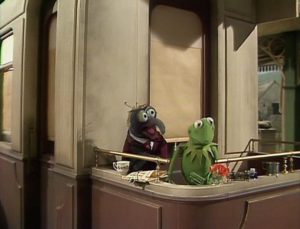 Unlike Kermit, Gonzo is thrilled about everything that happens here. He’s excited to be in a new location, and he’s always ready for a new adventure, even when that adventure is “an accidental trip to Pittsburgh.”

Most importantly, he convinces Kermit to relax by starting a sing-along of “Sentimental Journey” while they’re pumping a handcar back to the train station. This song – the UK sketch, weirdly – is the point when Kermit begins to seem like himself again, and we see it happen through the power of song.

When Gonzo starts singing, Kermit is extremely grumpy about it. He jokes about firing Gonzo, and he even questions the very idea of singing for fun (“I don’t believe this, he’s gonna sing?”). Away from the theater and lost in the real world, Kermit is so irritated that he rejects the very premise of The Muppet Show, where a song is always welcome. Whoever this guy is, he isn’t Kermit.

But about halfway through, Kermit starts singing along. Slowly at first, echoing the single word “Seven.” Eventually, he takes a solo line, and then they finish the song as a duet. Suddenly, Kermit is back. He takes charge, yelling out commands and gleefully declaring that “We’re gonna get there!” By singing a Tin Pan Alley standard with his buddy, Kermit finds himself. He remembers who he is, and not even getting hit by a train can worry him now.

Next week, we’ll be back in the Muppet Theater and Kermit can go back to being the calm port in a storm of chaos. And that’s great. But this week we got to go outside, to a world where none of the rules apply and Kermit shows a very different side of his personality. I’m so glad that the show was confident enough to let that happen. 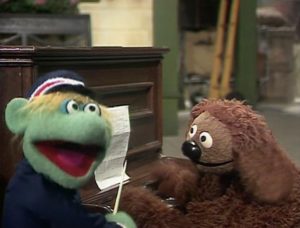 Best Joke: Rowlf during the opening theme song at the train station: “Hey, do you know who’s conducting? The conductor!”

Lamest Joke: See: Best Joke. Same. The Muppet Show has finally achieved communion with true perfection. In that moment, the great and the terrible are one. The wretched and the sublime are joined in a single purpose.

MVM (Most Valuable Muppet): Kermit, for all of the reasons I already discussed.

Most Classic Moment: “The Rhyming Song,” one of the most baffling things ever to appear on The Muppet Show. It would go on to be included on four different albums. 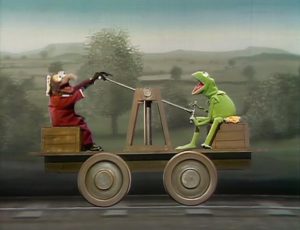 Should-Be-Classic Moment: Winky Pinkerton, the surly, low-voiced penguin who does impressions of other birds.

First Appearance Of…: The world outside the theater, which will the Muppets will return to many times over the next four decades. It’s still a set in Elstree Studios here – they didn’t actually go on location to a train station – but it’s a start.

Musical Highlight: “Oh Lonesome Me,” which starts a duet between two of the greatest country singers of all time – Loretta Lynn and Jerry Nelson (as Baskerville.) They’re eventually joined by Rowlf and some other dogs. 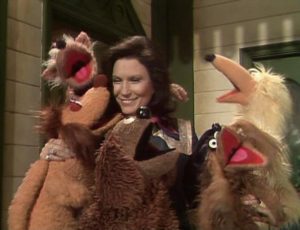 Missed Opportunity: We never see the audience. Where is the audience sitting? I like to imagine that the terminal is full of uncomfortable Muppets in folding chairs.

Adultiest Content: The closing number, “One’s on the Way,” is all about how parenthood has ruined the narrator’s life.

One More Thing…: If Kermit and Gonzo can take a train to Pittsburgh, does that mean the Muppet Show definitively takes place in North America?

Click here to hope it isn’t twins again on the Tough Pigs forum!