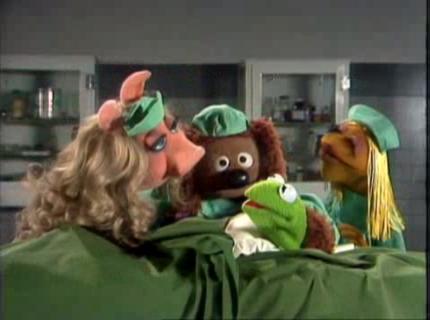 As sophisticated, knowledgeable consumers of media in 2019, we love to watch TV shows from past decades and say “They wouldn’t be able to get away with THAT today!” Sometimes these comments are made with a tone that implies things were better in the Good Ol’ Days, when producers were less sensitive about what was fit to air. When I make such a remark, though, I try to make sure it’s coming from more of an observational standpoint. Not so much “Wow, things were better when TV writers could do these things they can’t do now!” as “Huh, it’s interesting to see how things have changed.”

The episode of The Muppet Show guest-starring country superstar Kenny Rogers includes no fewer than three things that had me thinking these thoughts. 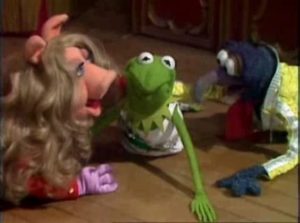 This episode’s storyline focuses on Kermit repeatedly experiencing serious injury. A trapeze stunt goes awry and he collides with the theater proscenium, a hospital lamp falls on him, a catapult sends him flying through the air and crashing into Statler and Waldorf’s box. He ends up on crutches! All of these painful incidents are presented for our amusement.

Would the Muppet decision-makers allow this to happen to globally beloved family-friendly entertainment icon Kermit the Frog today? Well, maybe. Muppets Most Wanted threw Kermit in a Russian gulag, and the ABC The Muppets series gave him a job he hated. But those story elements had mostly emotional effects on Kermit. It’s harder for me to imagine a modern Muppet production subjecting Kermit to so much physical abuse. But you know what? I’d be happy to be proven wrong. It’s undeniably funny to watch the frog in these cartoonish slapstick situations. 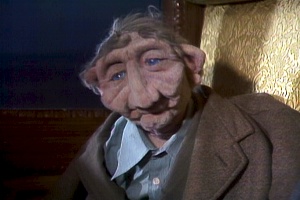 There’s also a musical number, which I’m more certain about. Kenny Rogers is the guest star, and it’s 1979, so of course he has to sing his hit “The Gambler,” but the number is staged in a strikingly dark way. Rogers sings while riding a train with three haggard old Muppet men, and these puppets (which I don’t think we’ve seen before or since) are lifelike to the point of being creepy.

Each time the song reaches a point when it quotes the title character, the Muppet Gambler somberly intones the lyrics rather than singing them. Throughout, he’s drinking whiskey and smoking a cigarette. When Rogers arrives at the line where the Gambler “breaks even,” the Muppet dies. Gambling, drinking, smoking, death!

Would the Muppet decision-makers allow this to happen in an ostensibly family-friendly Muppet production today? Well… maaaybe? Cigarettes are out, I’m sure. But it wasn’t that long ago that the ABC series did an episode about the Muppet characters getting drunk and suffering from hangovers. And hey, remember that online Halloween video from a few years ago that ended with Beaker turning into a ghost? It’s also worth noting that the Gambler seems a lot happier and more animated when he returns in spectral form. Surely it wouldn’t be too traumatizing for kids to see a dead guy doing some happy dance moves! 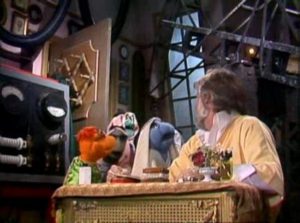 Then there’s the B-plot, which is barely substantial enough to count as a B-plot, or even a running gag. It seems Scooter’s uncle who owns the theater has sold the mineral rights to a group of Middle Eastern oil drillers. As a result, there are oil wells all over the backstage area.

Would the Muppet-decision makers allow this subplot today? Nope, if only because the over-the-top Middle Eastern caricature Whatnots wouldn’t fly. But really, you could remove most of this stuff from this episode’s script without affecting it much. I kept waiting for the oil wells to wreak some havoc with an onstage act, but it never happened. It almost seems like the writers forgot about it until a brief cut backstage during the closing number reveals the oil tycoons shouting “It’s a gusher.” Unfortunately, the show did not strike it rich with this gag. 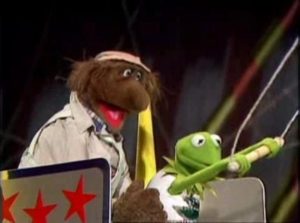 Lamest Joke: In a circus-themed opening number, Beauregard stands ready to give Kermit a push on the trapeze. Kermit says “Don’t push me hard!” Then when Bo says “What?” Kermit says “Push me hard!” And Bo pushes him hard. Yeah, of course he does! He just asked Kermit to clarify, and Kermit requested to be pushed hard! It’s pretty clumsy, and it could have been easily improved simply by having Beauregard ask “Don’t what?”

MVM (Most Valuable Muppet): Kermit, who takes a lot of punishment for our entertainment.

Coolest Puppetry Effect: Jim Henson does a great job of making us believe Kermit is hobbling around on crutches, especially considering that version of the Kermit puppet doesn’t even have legs.

Rare Appearance Of…: Fozzie’s ma, who makes one of her few Muppet Show appearances in the UK Spot “Knees Up Mother Brown.” Her knees also make an appearance. 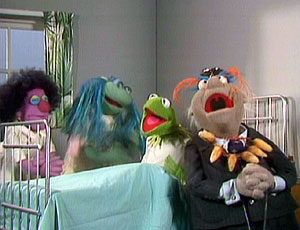 Classic Moment: “Coconut,” a song by Harry Nilsson, who probably should have guest-starred on this show. It’s a silly, catchy song to begin with, and with Kermit’s nurses, doctor, and hospital room gradually transforming into a jungle, it reaches new heights of ridiculous fun.

Should-Be-Classic Moment: When Robin introduces an act, he does Kermit’s “Yaaaaay!” arm flail. Then Piggy introduces a number and she does it too!

One More Thing…: One of the Middle Eastern oil tycoons has real human hands, like the Swedish Chef. That seems like a rare and surprising design decision… until the “Gambler” number, when all three of Kenny Rogers’s fellow passenger Muppets also have human hands! Did they run out of fabric to make Muppet hands that week?

Okay, One More Thing…: “Coconut” was on the mid-‘90s Muppet Hits compilation album. At the time, my friend Justin and I listened to it a lot, and we both declared ourselves capable of flawlessly reproducing Jerry Nelson’s doctor voice, arguing over whose impression was better. We both said “If you call me in the me in the morning, I’ll tell you what to do” many, many times.

Click here to gamble, drink, smoke, and die on the Tough Pigs forum!