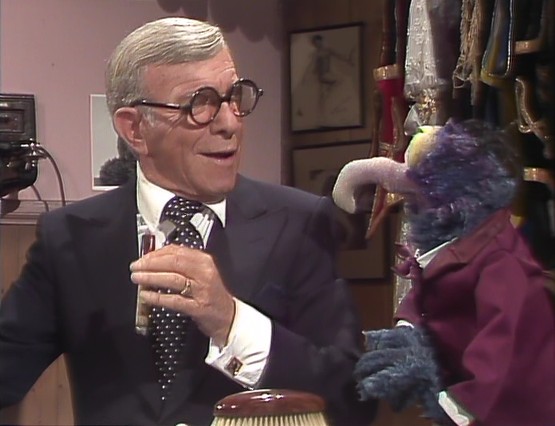 Here we are, just back from our hiatus after a summer off from Muppet Show reviews. I’m sure it feels just like it did for the Muppet Show crew, taking a few months off from producing 24 half hours of television. Except all we did was stop writing some nonsense about 40-year-old television shows for a while.

The George Burns episode of The Muppet Show was the tenth one filmed for the second season, but the first to air on US television. That means that someone, in their infinite wisdom, made a conscious choice to skip nine other celebrities in favor of an old cigar-smoking comic. Previously, we talked about the broadcasters’ decision to start the series off with Rita Moreno, and now we have a similar question. What is it about the George Burns episode that lends itself so well to not just a season premiere, but the start of a new direction for The Muppet Show?

When you think back on the complete series, it doesn’t feel like there’s a big divide between the first two seasons, but there really is. There’s a new intro (hello, arches!), more consistent performers (no more Frank/Richard swapping for Miss Piggy!), less of a focus on recurring sketches that rely on awful puns (At the Dance becomes an opportunity for a musical number!), and new character directions (Gonzo isn’t depressing anymore!). Most exciting, the guest stars have more to do backstage, integrating more with the actual storylines of the episode. 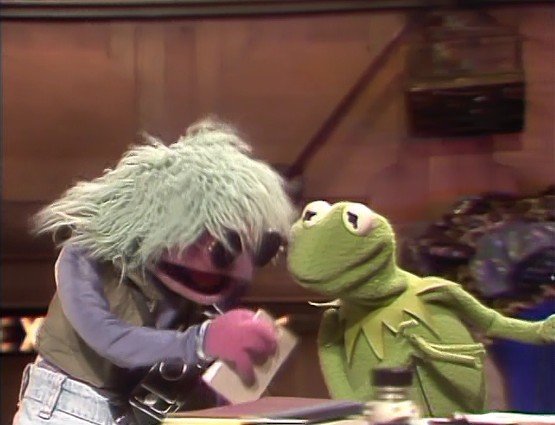 In this episode, the Muppet Theater is haunted by the spookiest of demons. No, not Uncle Deadly (that happened in a different episode). A gossip column writer! Fleet Scribbler, best known for being loathed by Muppet writers and hastily retired soon after his first appearance, makes his debut. He grills Kermit for a scoop, threatening conflicting headlines like “Muppets rely on same old tired junk” and “Muppets changing format, desperate to sustain show”.

The latter of those two headlines isn’t too far from the truth. The Muppet Show needed a serious shot in the arm, and every new choice led the cast closer to who we see them as today. Miss Piggy is less of a generic lovesick pig and more of a brash diva, as we see in her interaction with Fleet Scribbler, as well as the “I Won’t Dance” number with Kermit. Gonzo grew a neck and moveable eyelids, and now he’s much less of a starving, desperate artist and more of a weirdo who puts himself in odd situations simply because he likes it. Fozzie is also a bit less pathetic, only appearing on stage once (in the UK Spot, singing “Wotcher Knocked ‘Em in the Old Kent Road”) in which he’s able to successfully perform with the participation – and not the hinderance – of Statler and Waldorf, who both sing along. This episode also marks the first time Richard Hunt’s Janice was seen by American audiences, finally starting her recognition as the spacey valley girl we all know and love. 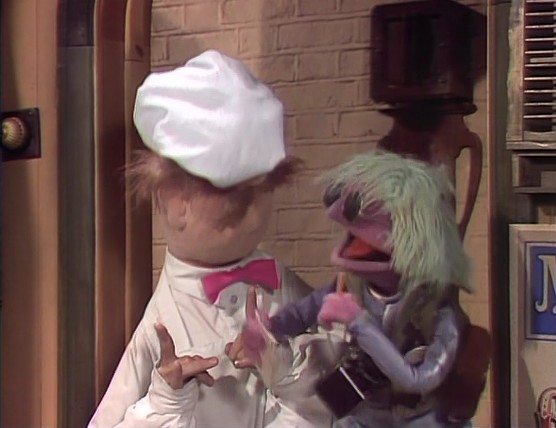 Back to Fleet Scribbler (sorry, but I promise we’ll shut up about him after today), his backstage shenanigans put him in the path of Kermit, Piggy, Scooter and the Swedish Chef, all of whom give him some scandalous fodder for his trash rag. But then he meets his match in George Burns, who proceeds to joke and lie and basically treat Scribbler like a fool. Admittedly, this is pretty much Burns’s only opportunity to cross over with the backstage plot, but combined with a strategic puff of cigar smoke in Scribbler’s face during the goodnights, he proves to be the savior Kermit so desperately needs, and not just another audience member to witness the Muppets’ shenanigans.

To balance out the Scribbler, George Burns gets a few classic moments with Gonzo, all of which are gold. First, the classic “Gonzo fiddles while George Burns” line, then a great bit where Gonzo gives details about his childhood (his mother died two years before he was born) and gets compared to Walter Matthau, and finally, Gonzo ruins Burns’s song “You Made Me Love You” with some ill-timed “didn’t want to do it” repetitions. I genuinely love these two as a comedy duo, and funnyman Burns play a great straight man to the little blue weirdo.

All in all, the George Burns episode acts as a great spotlight for what The Muppet Show could be, and what eventually will be. This is going to be a great season, and I can’t wait to see what our ToughPigs team has in store for another year of reviews! 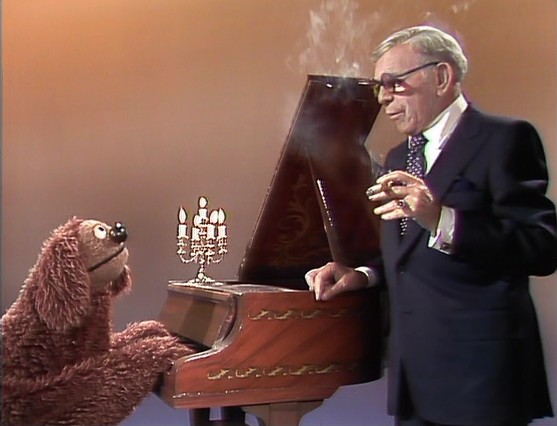 Best Joke – It’s only the first half of a joke, but I love George Burns’s deadpan answer to Fleet Scribbler’s question about how much the Muppets are paying him to be on their show. $25,000, in case you were wondering.

Lamest Joke – A quick musical moment makes for one of the Muppets’ most obvious jokes: A Whatnot quartet sings “Chattanooga Choo Choo” and almost gets hit by a train. It also doesn’t help that the train in question is obviously a toy.

MVM (Most Valuable Muppet) – Gonzo takes this one, as he makes for a fantastic substitute Gracie Allen. 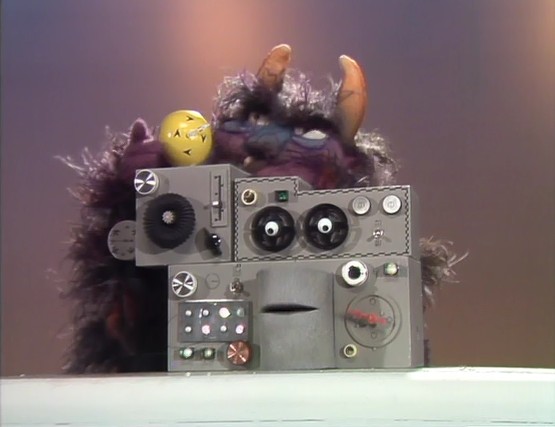 Most Classic Moment – “Coffee Break Machine”, a classic sketch about a monster eating a talking machine that Jim Henson first performed on The Ed Sullivan Show back in 1967. How did they never get around to doing this one on the first season???

First Appearance Of… – As previously mentioned, Richard’s Janice. She isn’t quite “Janice” yet, but she’s on her way. (Also Fleet Scribbler, but who cares about that guy.)

Musical Highlight – George Burns, best known for telling jokes, “sings” two numbers. I use quotation marks because he does more of a Rex Harrison-esque speak-singing, but he’s so old and cute and wrinkly, it comes across more adorable than anything.

Obscure Character Watch – Nigel, Boppity, Baskerville, and others appear alongside Scooter and Gonzo in the Muppet chorus during George Burns’s “You Made Me Love You”.

One More Thing… – During the intro, the first time American audiences had ever seen this new and now-classic version, Waldorf turns to Statler and says, “Isn’t this opening pretentious?” It’s as if he knew the budget had gone up and the Muppets were pulling off something bigger and more extraordinary. And yeah, maybe a little pretentious.

Okay, One More Thing… – Miss Piggy wears her Pigs in Space outfit while talking to Fleet Scribbler, despite there not being a Pigs in Space sketch in this episode. And if that isn’t odd enough, American audiences won’t be introduced to a Pigs in Space sketch for two more weeks (in the Madeline Kahn episode). Oh, what must people have thought when they saw Piggy in that glitterbombed sci-fi getup! 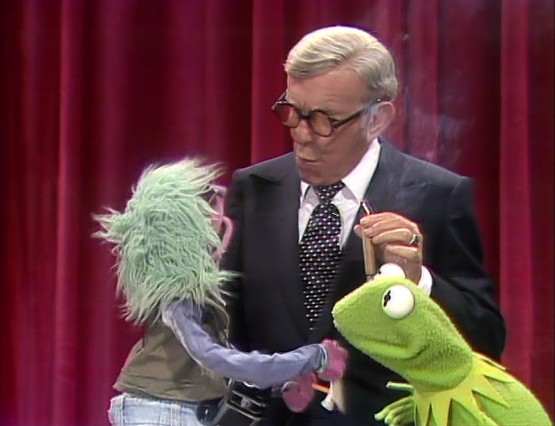 Click here to fire the writers on the ToughPigs forum!