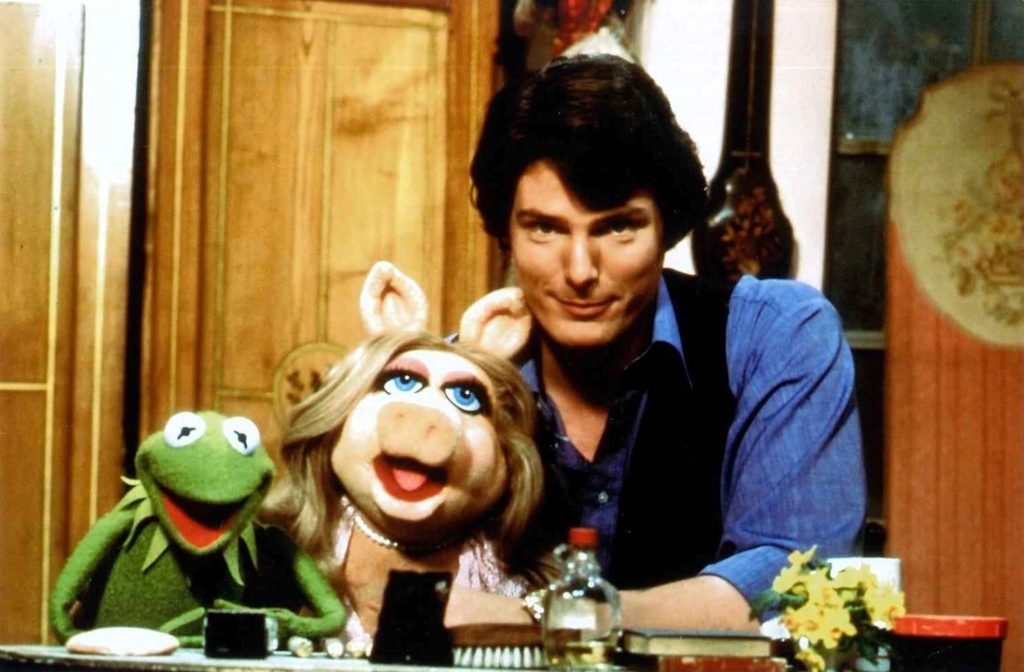 There are many fine contenders for the title of Best Episode of The Muppet Show, but the Christopher Reeve episode is my personal favorite. It’s so full of amazing moments that I don’t even know where to start. When I sat down to organize my thoughts for this review, I had no idea how to make them into a coherent essay, rather than an entire page of exclamation points. 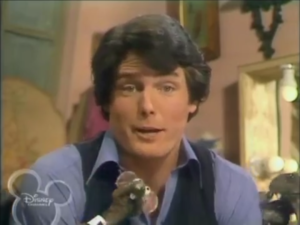 Minute 1: The way Christopher Reeve shrugs his shoulders as he says “Gee, most stars get groupies. I get rats!” 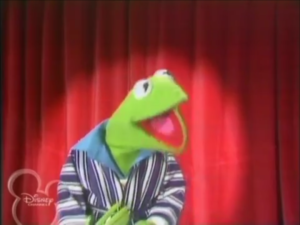 Minute 2: Kermit’s striped bathrobe during the intro, because he needs to do a quick change for the opening number, Disco Frog. 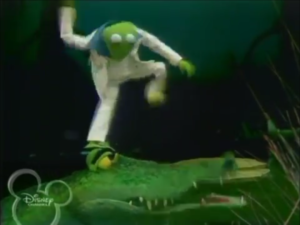 Minute 4: Kermit surfs on a lilypad.

Minute 5: Piggy excitedly tells Kermit that she’s going to sing “Never Before, Never Again” and waxes nostalgic for The Muppet Movie, where she “sang it under the moonlight” and “they snuggled together.” It makes so much sense that 1) Piggy loved shooting those romantic scenes, and 2) Kermit doesn’t want to talk about it. 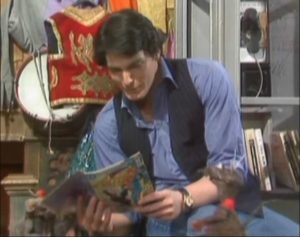 Minute 6: Christopher Reeve reads Action Comics #506 backstage. This is, amazingly, the only existing footage of Reeve reading a Superman comic. 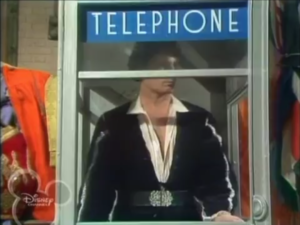 Minute 7: Reeve enters a phone booth, changes into a Hamlet costume, and comes out doing a Laurence Olivier imitation. 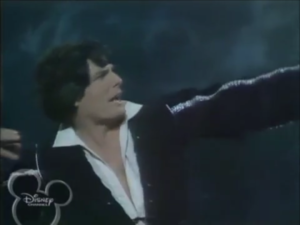 Minute 8: During the Shakespeare sketch, Reeve is as broad as possible, making a complete meal out of every line. What a treasure. We as a society didn’t deserve him.

Minute 9: Yorick the skull says that Shakespeare isn’t ready for [the Muppets], and Fozzie yells “Song cue!” I love when the Muppets do that kind of blatant “We’re going to entertain you now, folks!” stuff. 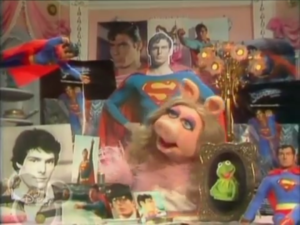 Minute 10: Piggy has so much radical Superman junk. A true fan! 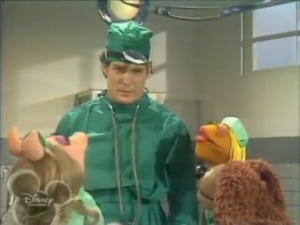 Minute 12: Christopher Reeve’s performance as the smug, arrogant doctor in Vet’s Hospital does a great job of showing off his range. This isn’t at all the same approach he used in the Shakespeare sketch, but it’s very much a character. 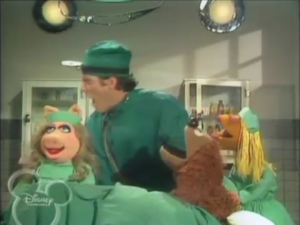 Minute 13: After several of the jokes, Reeve does this silent fake laugh, and it makes me laugh every time.

Minute 14: As the UK sketch opens, Sam the Eagle mutters “Ugh, this show is disgusting. I’m going to write to someone important and put a stop to it.” 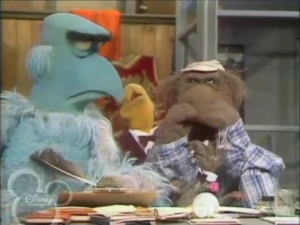 Minute 15: In his letter, Sam describes Beauregard as “a lump playing harmonica.” 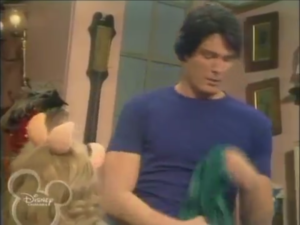 Minute 16: When Reeve takes off his Vet’s Hospital scrubs, Piggy screams “Waa-HA-HA!” in surprise and delight.

Minute 17: When Reeve accidentally breaks a table, he gets to display that signature bumbling Clark Kent talent for physical comedy. 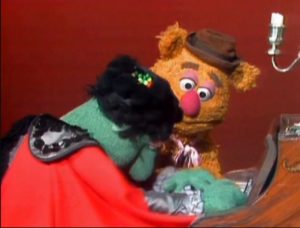 Minute 18: Fozzie plays a piano duet with a matador. This is the greatest TV show ever made. 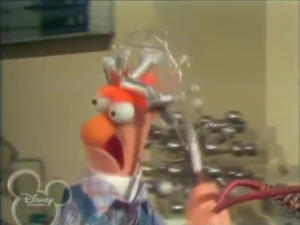 Minute 19: Beaker gets a cow-milking machine stuck to his head. Bunsen says “Oh, Beakie-Poo, that’s not funny!” But it most definitely is.

Minute 20: After she injures Rowlf’s hands, Piggy kills time by posing for the crowd. Always a professional! 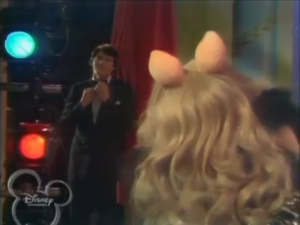 Minute 21: Nobody human being has ever looked cooler than Christopher Reeve adjusting his bowtie backstage on The Muppet Show.

Minute 22: As Reeve starts playing her song, Piggy glides up to the piano with a sigh. Frank Oz always knew how to get the maximum effect out of small moments like that.

Minute 23: Christopher Reeve is not a great singer, but he seems like he’s having such a blast during his duet with Piggy that it doesn’t matter at all.

That’s just a sample of this delightful episode! Watch this one as soon as you can track it down! 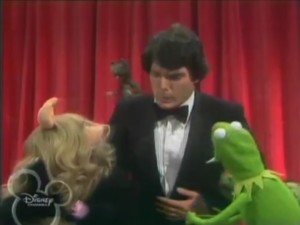 Best Joke: A killer sheep rams the Newsman in the back of the neck. This might be the weirdest fate that has ever befallen the Newsman, and I laugh so hard at it every time.

Lamest Joke: Christopher Reeve, with his Superman strength, can’t lift Piggy because Piggy is a fat person. Ugh, why?! The only bum note in this otherwise-perfect episode.

MVM (Most Valuable Muppet): All of the rats, who give this one so much of its flavor. They read comics with Christopher, they get pushed out of the way by Sam the Eagle, they encourage Christopher to play piano. They’re the real stars here.

Most Classic Moment: Vet’s Hospital with Rowlf as the patient and Reeve as the doctor, maybe the best-ever installment of that sketch.

Should-Be-Classic Moment: “Brush Up Your Shakespeare” should be shown in every 9th grade English class until the end of time. 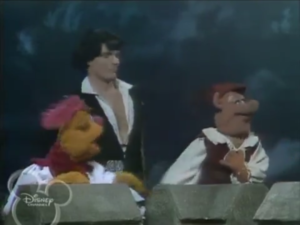 Missed Opportunity: That we didn’t a full-length movie starring the Christopher Reeve/Fozzie/Link trio.

Most Dated Joke: The inclusion of the song “Disco Frog.”

Coolest Puppetry Effect: When Foo Foo brings Piggy her autographed picture of Christopher Reeve, the real dog goes down the spiral and emerges from the last turn as a puppet. It’s very seamless! 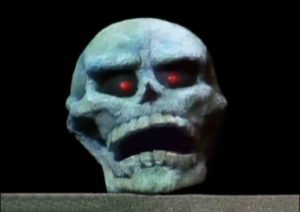 Obscure Character Watch: This Yorick technically isn’t the same skull who appeared on Sam & Friends, but it’s nice to see Henson paying tribute to his early history all the same.

Adultiest Content: After Beaker’s hair gets curled by a cow-milking machine, Bunsen strokes his arm and says “Why Beaker, you’re hauntingly attractive today!”

One More Thing…: At one point, Piggy calls him “Christopher ‘Perfect Body’ Reeve,” which was certainly reasonable at the time but now  just makes me really sad. 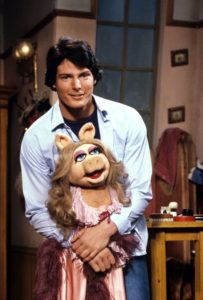 Click here to scold me for not mentioning the Muppet reference in Action Comics #506 on the Tough Pigs forum!