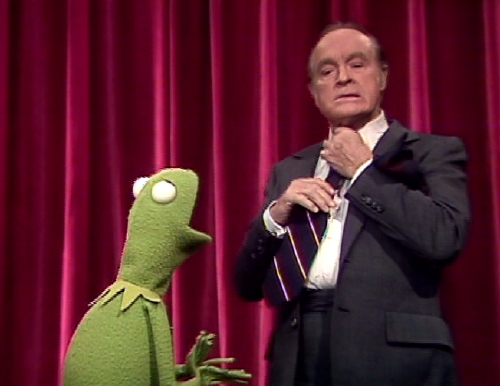 I’ll admit this to all you Mupheads out there (yeah, I’m trying out a new nickname for y’all… is it going to stick? Only time will tell!), I’m not the biggest Bob Hope fan. In fact, I only have a passing familiarity with him from old TV appearances (like this one) and from being parodied in countless Looney Tunes cartoons (or was that Bing Crosby? I always get those two mixed up).

After watching this episode of The Muppet Show, I have a… slightly more informed understanding of Bob Hope. But, only slightly, because he barely appears in the episode.

Apparently, Hope’s schedule was hectic at the time of this episode being produced, and he could only appear in a small portion of it. The Muppet writers have fun with this limitation by making the plot that Hope has so many different benefits and functions to attend that he’s zipping across the globe while he’s supposed to be performing at the Muppet Theater! It’s a fun conceit and leads to some great gags, like Hope being transported back to the Muppet Theater by cannon, offscreen (unfortunately).

These limitations imposed by the guest star give our Muppet friends (Mufriends? New nickname number two? Too much like the word muffin?) free reign to serve up a lot of chaotic, old-timey vaudeville realness, as only the Muppets can. The Swedish Chef segment, in which he battles a duck he wants to cook is a definite episode highlight.

On a more serious note, I have to commend the unconditionally classic Muppet portrayal of the song “For What It’s Worth.” Written by prolific 1960s songwriter Steven Stills and popularized by Buffalo Springfield, “For What It’s Worth” is one of the quintessential anti-war rock songs of the sixties. Here, it’s repurposed as a humane anti-hunting anthem, sung by a slew of somewhat realistic woodland-creature Muppets, the lead voiced by the earthy singing voice of Jerry Nelson. This segment is effectively sobering and serious but still manages to be clear and appropriate for a family audience: an impressive feat, and one that Henson and co. were often accomplishing during their heyday. It’s one of the factors that make the show so high quality and so fondly remembered today. 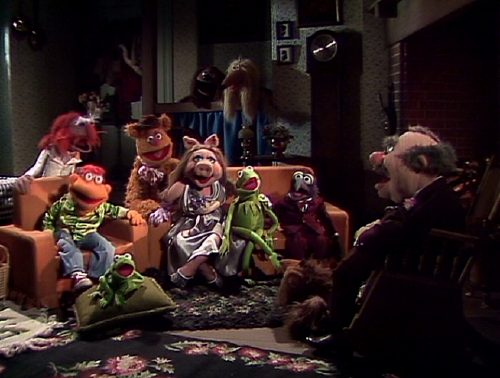 On the flip side, there’s the extra segment for British audiences featuring a surprisingly large cast of Muppet characters relaxing by the fire and singing a medley of old British music hall songs. This segment would get a pass from me, except for the inclusion of Muppet Theater owner JP Grosse with the rest of the gang. Sitting alone in his chair and scowling while the rest of the Muppets are practically huddled on the other side of the room? It’s uh, off-putting to say the least. It’s almost as if JP is forcing the rest of the Muppets to sing with them (Muppostages? Oh, forget it!)? What does his nephew, Scooter have to say about any of this? These are forty-year-old questions that need answers! 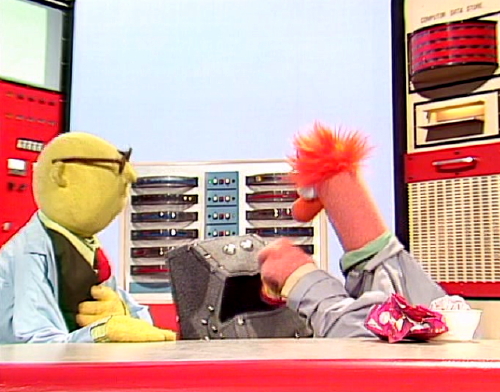 Creepy theater owners aside, this one is thin on plot, but big on laughs and heart, to be sure. Not only do we get the aforementioned Swedish Chef sketch, we have Bunsen and Beaker dealing with a robot garbage can with a monstrous appetite, and a wonderful segment at the end featuring our actual special guest star singing a rendition of “Don’t Fence Me In.” This is a song that Hope’s regular cinematic co-star Bing Crosby (ah! That’s why I get them mixed up!) had great success with in the ’40s. Bob hope sings this one with a Muppet horse who’s cleverly puppeteered using some cool, full body chroma-key effects. It’s nice to see Bob Hope do this number at the end of the show. To be honest, I kinda wish he had been in the whole episode a little more!

MVM (Most Valuable Muppet): this has got to go to Animal, who has a small but vital subplot. He’s trying on new hobbies in order to calm himself down. Suffice to say, alligator wrestling doesn’t have the intended effect.

Most Classic Moment: Definitely the “For What It’s Worth” segment, which is fondly remembered by fans 40 years later.

Should-Be-Classic Moment: JP Grosse in the corner, being all.. er… gross? Nah, j/k Muppals (THERE IT IS!), definitely the final segment with Bob Hope and the horse. Their chemistry is gold, baby, pure gold!

Missed Opportunity: Not a lot of the Foz in this episode: a shame, I’d love him to compare comedic careers with Bob Hope, maybe make one of his famous monologues I keep hearing a lot about in this episode into a dialogue!

One More Thing… Just want to reiterate, “For What It’s Worth” is beautiful. I love them Muppets when they’re solemn and beautiful! 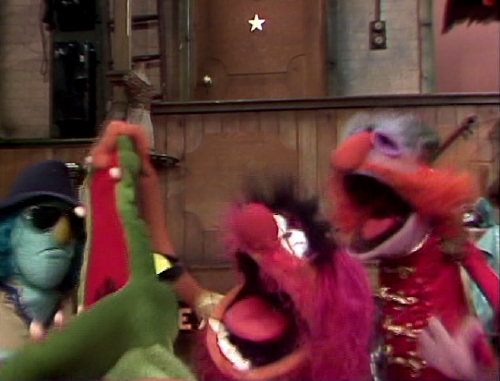 Click here to get shot out of a cannon to the ToughPigs forum!