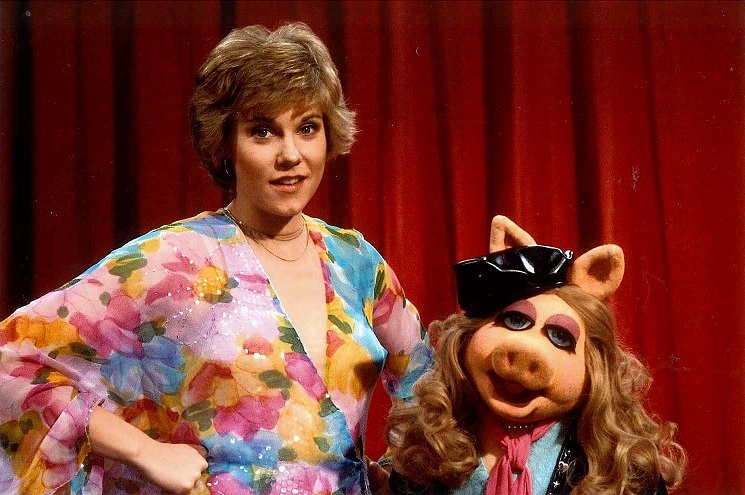 I’m a person who thinks about the Muppets a lot. A LOT. And in my myriad years of Fleece & Foam Studies, I’ve come to conclude that (stop me if you’ve heard this one) there are three essential ingredients that make a Muppet production feel like a Muppet production: funny comedy, good music, and that rare quality of “lovableness” that makes us root for the characters and keep coming back for more. 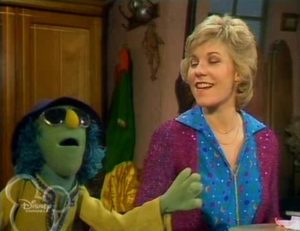 All of these elements are evident in the Anne Murray episode of The Muppet Show. There’s a lot to laugh at — there’s slapstick with Muppets zipping around on skateboards, there are bad puns about birds, there’s Fozzie spoiling the surprise of the opening number and then blaming Kermit for it. There’s Milton Miller and His Farmyard Philharmonic Trio, a ridiculous act featuring a goofball who sings a song and hits some animals with a stick, which the audience hates.

The music is pretty good, too. Anne Murray’s rendition of “Snowbird” is pleasant, and just brief enough so as not to be boring. “Walk Right Back,” which Murray sings in her dressing room backed by members of the Electric Mayhem, is an agreeably jaunty tune.

And the characters are as lovable as ever. Zoot spaces out repeatedly as he tries to remember what he was going to say to Anne Murray, while Beauregard is charming singing and playing harmonica with a ghostly dancer on his ceiling. That’s our Zoot! That’s our Beauregard!

So that’s comedy, music, and lovableness. But in revisiting this episode, it occurred to me that maybe I should add a fourth item to my list of Muppet musts: weird stuff. That epiphany came during the sketch Muppet Wiki calls “Trudge Trudge Streak Streak.” 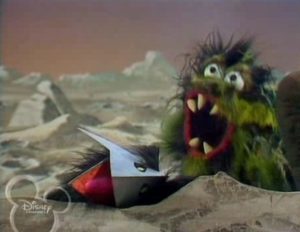 See, there’s this green monster, lumbering along an alien landscape as far-out electronic music plays. As he trudges, he grunts, “Trudge, trudge, trudge, trudge.” He encounters a sharp-beaked creature who streaks around shouting, “Streak! Streak!” This annoys the green guy so much he smashes the beaky guy with a club. Then they both smash each other with clubs, until they reach a truce and do a little dance. The whole time, they’re narrating their actions: “Smash, moan, chuckle, whimper, gloat, smash, crash, hurt, pacify, compromise, trudge, streak.”

Years before they had their own show, the Muppets made their name by making guest appearances on variety shows.  They hadn’t really established any lovable characters yet*, so they did a lot of weird sketches that were pretty similar in tone to this one. You got your “Glutton,” you got your “Monster Trash Can Dance.” After four and a half seasons of The Muppet Show, the Muppet people had gotten used to doing more conventional musical numbers and comedy sketches.

But it’s nice to see that they didn’t forget that sometimes the best thing for the Muppets is the weirdest thing. It’s a good thing to remember, and I hope the writers of future Muppet projects keep “Trudge, Trudge” in mind as they write, write, write, write. 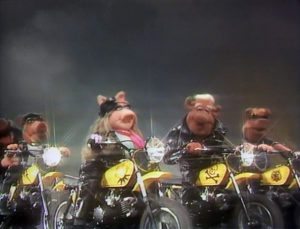 Best Joke: Miss Piggy (to Kermit): “I just love your eyes! They’re like two ping-pong balls floating in a pond of green algae.”

Lamest Joke:
Waldorf: “What are those little flying things?”
Statler: “Snowbirds.”
Waldorf: “’s no good either.”

MVM (Most Valuable Muppet): Scooter’s skating shenanigans add quite a touch of hilarity to these proceedings.

Most Classic Moment: That’s easy. It’s Miss Piggy and a gang of leather-clad pigs sing “I Get Around” while driving their motorcycles (Dare I say “their hogs?”). This is often shown in clip compilations, and the highly involved process of making of it was featured in the documentary special Of Muppets and Men. Even when you’ve seen that, the effect of pigs tooling up and down the strip is 100% convincing. Making Piggy the leader of this gang was an inspired move. And hey, the wardrobes in this number inspired the logo on THIS website!

Old Callback to a Running Gag: Scooter convinces Kermit to let him do roller-skating tricks onstage by reminding him that his uncle who owns the theater would like it. Scooter used to play that card all the time, but how long has it been since he last brought it up?

Most Dated Joke: When Scooter says “Thanks, Chief!” Kermit responds “Some chief. Taking orders from the papoose!” A joke that relies on cultural appropriation wouldn’t fly today. 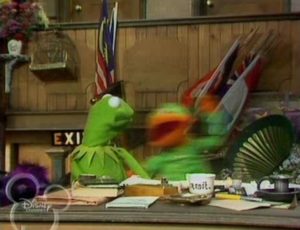 Coolest Puppetry Effect: Sometimes the simplest tricks are the best ones. Scooter and a few other Muppets spend much of this episode on skateboards, and it really does look like they’re gliding along on wheels. It’s only because I’m an observant intellectual that I’m able to tell you confidently that the puppeteers were not actually riding skateboards, they were just using their considerable skills to make it look like the puppets were skating.

Okay, One More Thing…: The “Trudge Trudge” monster is green in his onstage number. In fact, that puppet’s name is Green Heap. But when he appears backstage later, he’s purple! I’d love to know what happened there, especially considering Silver Beak, the “Streak Streak” creature, is the same.

*Yes, I know Kermit appeared on several shows and Rowlf  was a regular on The Jimmy Dean Show. Thank you.