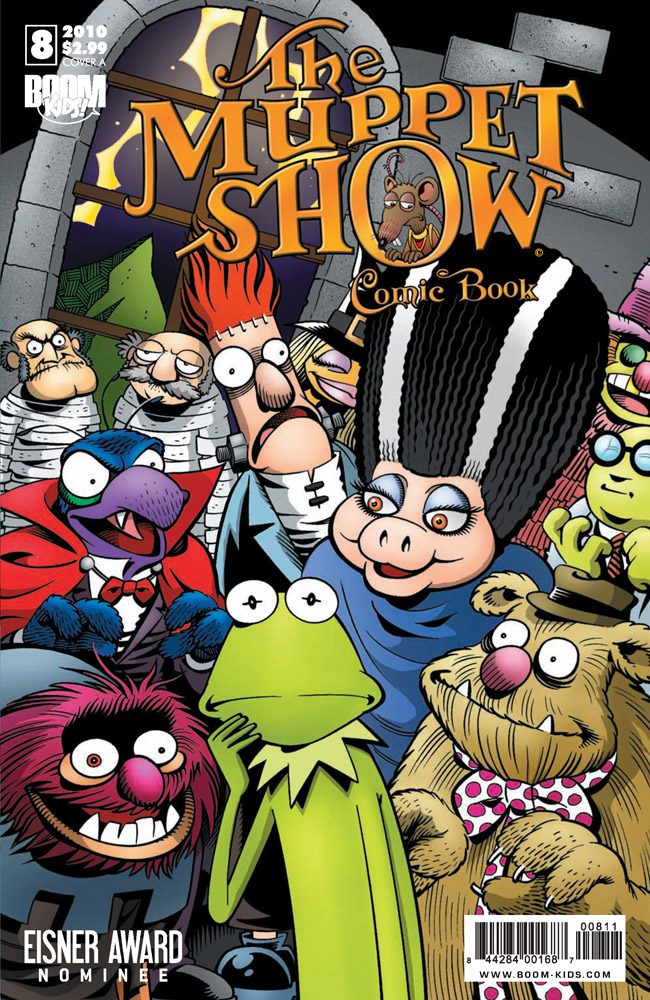 Once upon a midnight dreary, it was a dark and stormy night, and not a creature was stirring, not even those creepy twins from The Shining! Eeeek!

I know it’s only July, but that means BOOM Studios is planning ahead with their latest story arc of The Muppet Show Comic Book, the final issue of which will be released just in time for Halloween. Something to do with candy or pumpkins or whatever.

Issue #8 came out this week, and it kicks off the first issue in the new “Muppet Mash” storyline, an arc which will have lots of creepy crawlies and ghastly ghoulies and things that will scare your pants off (assuming you’re wearing pants). Roger Langridge manages to bring the funny as well as the pretty, and I’m already in that Halloween spirit! Seriously, somebody give me some fun-sized candy.

Our main story involves Gonzo following the current Twilight/True Blood/Vampire Diaries/Count von Count trend of vampirism in popular culture, as he returns from his vacation in Transylvania with a thirst for blood tomato juice, an aversion to garlic, and no tan. But the question remains: Is he really a vamp? Or is it all an act? I know that was two questions, but who really cares? (Drat, that was a third question!)

Of course, there are a few flaws in Langridge’s plan. The most glaring of which is the fact that Gonzo doesn’t have teeth. He’s got that pointy nose, but I don’t think anyone wants to see him drill that thing into someone’s neck. There’s also a few references to his paleness, but without holding two Muppet Show comic books next to each other, you’ll never notice the slight color change he’s given. Still, Gonzo’s vampiristic tendencies aren’t unfounded, as Kermit repeatedly points out the fact that you never can tell when Gonzo is acting strange or when Gonzo is being Gonzo.

Among the skits we see are: “Casey is a Bat”, a poem about, well, a bat named Casey, which is cute but not very Muppety. “Henhouse of Horror”, a silent skit in which Count Gonzo attempts to sick his teeth into his ladyfriend Camilla. “Gourmet Time with the Swedish Chef”, a slightly predictable (yet still amusing) gag involving garlic steak. “Veterinarian’s Hospital”, with Fozzie Bear as the guest victim patient. And my favorite, “Link Hogthrob, Monster Smasher”, starring the Pigs in Space trio as a team of paranormal investigators straight out of a 1950s horror B-movie. Not only does this last skit give us a new view on the Pigs in Space crew, but it also has a clever full-page spread of Link, Piggy, and Strangepork exploring the recesses of a spooky castle. I loved it, and I’m excited to see what sort of twists on this (and other) classic skits Roger Langridge has in store for us.

All in all, it’s looking like “Monster Mash” has all of the ingredients for another great Muppet Show Comic Book arc: it’s funny, it’s nice to look at, it’s original, and most importantly, it feels like the sort of thing Jim Henson would’ve made back in the day. Roger Langridge continues to give us exactly what Muppet fans expect from a Muppet Show comic book: That old Muppet Show feeling.

Click here to be a pain in the neck on the ToughPigs forum!