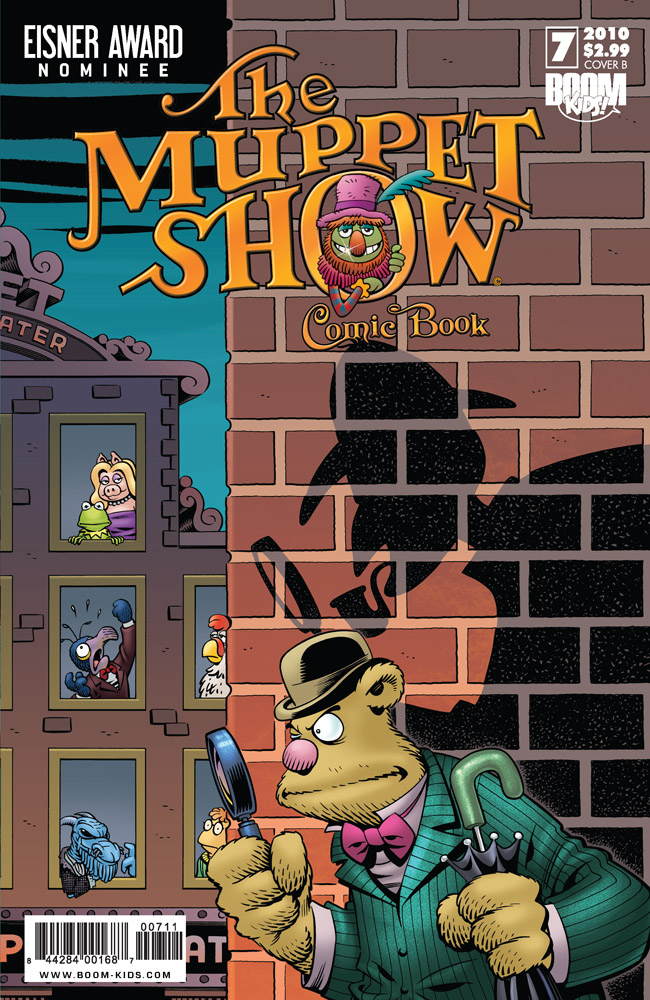 No one is sadder than me to see the “Family Reunion” storyline end. Well, except maybe artist Amy Mebberson (don’t worry Amy, we’ll see you again soon in Muppet Sherlock Holmes!). We were shocked to meet the adult Skeeter, we were thoroughly annoyed by Andy and Randy, and our tiny little hearts were touched as we learned more about the relationship between Robin and his Uncle Kermit. And who’s the next family member to be reunited with his or her loved one? You Muppet Family Christmas fans will be happy to hear that the special guest is none other than Emily Bear, Fozzie’s Ma.

As awesome as it is to feature Ma Bear in a Muppet Show comic, hardcore Muppet fans may notice that the story kind of ignores her previous appearances. This Ma Bear never had her son’s friends to her house for Christmas, she never traveled to Walt Disney World with them, she never came to see her son perform in the Cleo Laine episode, and she never appeared on stage in “Knees Up Mother Brown“. No, this Ma Bear is convinced that Fozzie is a detective’s assistant (which is… better than comedian?) and dating Skeeter (that’s probably a step up). Of course, the Muppets have never been concerned with continuity at all (Did they meet as babies? In college? On a cross-country road trip?), so why bother now with something as trivial as a hardly-recurring character? 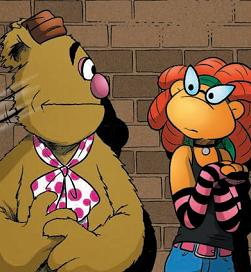 This issue is almost as much Skeeter’s story as it is Fozzie’s, which is great because this is her swan song (for now, hopefully). Skeeter shows off her resourcefulness, her charm, her sense of humor, her tenderness, and her brains. That last one in particular is satisfying since so many Muppet characters are played as not-so-smart or otherwise touched in the head. Skeeter had a really fun arc, interacting with her old Muppet Babies costars and showing us what coulda been. If you had told me before her first issue that Skeeter would be joining the Muppet Show cast, I would’ve had serious trepidations about whether or not it would be a good idea. But Roger Langridge and Amy Mebberson proved me wrong and gave us an incredibly interesting three-dimensional character. And now I kinda wish the Muppets Studio would actually build the puppet and add her to the main cast. Because I am not done with Skeeter.

The sketches in this issue don’t stand out as much as the ones we’ve seen so far, but they’re still almost as entertaining. Fozzie has a fantasy about being a detective’s assistant (getting Amy Mebberson ready for her Muppet Sherlock Holmes stint, I’m sure). Rowlf reads a poem on a dark stage. Dr. Strangepork sleeps his way through a Pigs in Space sketch. And Fozzie dresses up like Baron Munchhausen and sings a song about his chronic lying. But the main story reigns supreme here, as Fozzie and Skeeter both go through some twists and turns (and surprises) along the way. 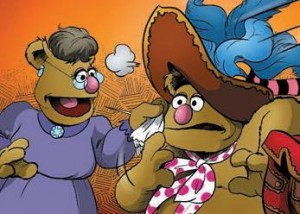 “Family Reunion” was the perfect Muppet Show story. In addition to the comedy and the music and the heart that we’re already accustomed to, it was a love letter to the fans, bringing us characters we haven’t seen in years or had never seen at all. Add to that the brilliant writing of Roger Langridge and the breathtaking art of Amy Mebberson, and you’ve got a classic on your hands. And to top it all off, the final panel of the book features what might be my favorite Muppet surprise cameo yet. I’ll miss seeing Skeeter hanging upside-down in The Muppet Show Comic Book every month, but we’ll just have to hope that Langridge and Mebberson find a way to bring her back. “Family Reunion” works on so many levels, and you will love every single one of them.

Click here to wonder if they’ll ever actually say Skeeter’s name on the ToughPigs forum!