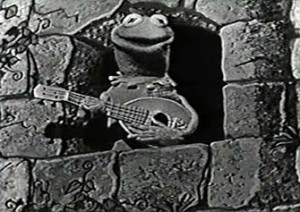 At the start of the second act, Kermit recaps:

It’s evening at the palace gates
The moon shines bright and clear
The tower guard waits patiently
For the first guests to appear!

Taminella arrives at the palace gates, cunningly disguised as Santa Claus. Charlie the ogre enters, with jingle bells tied around his ankles, dressed as her reindeer. This is Part 1 of her clever plan. She introduces herself to the palace guard, who objects that Santa Claus isn’t due until Christmas. Tammy explains that she’s getting an early start on her Christmas list. A quick chorus of “Jingle Bells” and a couple of Ho ho ho’s later, Taminella and Charlie manage to get past the gates, and Tammy instructs Charlie to go around the side of the castle and wait by the ballroom window.

Meanwhile, there’s more trouble in the palace. Instead of ordering 500 peanut butter sandwiches for the party, the Prime Minister sent out 500 orders by mistake — “some slight mix-up in the purchasing department” — so there’s sixty-seven thousand peanut butter sandwiches piled up all over the castle. “What are we gonna do with all these sandwiches?” King Goshposh exclaims. The Prime Minister sputters: “Well, if each guest ate eighty-four of them… we’d only have… a couple of thousand left over…” The King decides to hide the sandwiches in some of the empty storage closets.

Santa Taminella gets to the ballroom, and whistles for Charlie. The ogre’s hand comes through the ballroom window, wielding a fearsome club. The witch explains: “It’s time for Part 2 of my plan — Get the Princess! If you see the Princess walk by this window, smasheroonie!” Charlie gets out of sight as the King and the Prime Minister walk by, looking for storage closets. Taminella curtsies: “Merry Christmas, your majesty!” “Merry Christmas to you, Santa Claus!” the King replies as he walks by. “Funny, I don’t remember inviting Santa Claus to the party…” When they’re gone, Taminella ducks into the closet to change into her next disguise.

Princess Gwendolinda enters, looking for Santa Claus. Her father said Santa was around here somewhere. Swish! — the ogre misses as she walks by. “Gotta practice up on my backstroke,” Charlie mutters. “I’ll get her next time.”

The King and Prime Minister come back to the ballroom, and find Taminella dressed in a curly blond wig. The King greets his “daughter” warmly, then goes off in search of more empty closets. Gwendolinda returns again, and Tammy puts on a pointy Prime Minister hat — and Gwendolinda is also taken in by the clever disguise. (Are you getting all this? It gets kind of complicated at this point.) Gwendolinda asks “the Prime Minister” where Santa Claus is, and Tammy tells her to look in the closet. Gwendolinda looks inside, and Tammy slams the door, trapping the Princess.

“Part 2 of my plan — mission accomplished!” the witch crows, putting the blond wig back on. She calls for Charlie — and smasheroonie! He smacks her in the head with his club. “I got the Princess, Miss Tammy!” he yells. “Very good, Deadeye,” she snaps, “but I just took care of the Princess myself.” “No more smasheroonie?” he says. “No,” she says. “That was Part 2. Now we’re in Part 3. I find the presents, and then I hand ’em out to you. That’s Part 4. Now… where do you suppose those presents are…”

As Tammy hunts around for the presents, the King and Prime Minister return, and check the closet for more storage space. They let Princess Gwendolinda out, but when Tammy comes back, she locks them in. Then Gwendolinda comes back, still looking for Santa Claus, and lets the King and Prime Minister out. (This slamming-doors farce stuff is a lot funnier when you don’t have to synopsize it.)

Finally, just as everyone’s getting confused, Kermit rushes in with an announcement:

Let me take a second —
or four, or five —
to tell you that the presents
are beginning to arrive!

The King rushes off to check on the birthday cake, as the Prime Minister goes to accept the presents. Taminella shrugs: “Well, I’ve lost all the prisoners. But I’ll still get the presents! CHARLIE! You got your gunny sack? Then stand by… Here come the PRESENTS!”

Tomorrow: The story concludes
as Taminella gets her greedy hands
on the jewel-encrusted goodies,
and dons her weirdest disguise yet…
Pierre, the greatest sculptor in Tinkerdee!