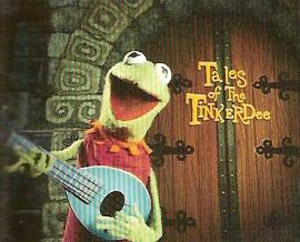 Tales of the Tinkerdee was a half-hour TV pilot written and performed by Jim Henson and Jerry Juhl in 1962, who tried to sell it to networks as a Rocky and Bullwinkle-style fairy-tale puppet show. Unfortunately, the world wasn’t quite ready for Muppet madness. Tinkerdee didn’t sell, and the pilot never even aired. In fact, the land of Tinkerdee was entirely unknown to Muppet fans until 1993, when Christopher Finch included a few tantalizing stills from the pilot in Jim Henson:The Works. Some of Henson’s original Tinkerdee design sketches were also recently included in the Designs and Doodles book. But as for the show’s actual contents, it’s been a complete mystery to Muppet fans… until three months ago.

This summer, the Museum of Television and Radio hosted “Muppets Forever!”, an exhibit of Henson’s television work — and, miraculously, Tinkerdee was unearthed and screened publicly for the very first time. Now that the exhibit’s over, the show is part of the Museum’s permanent collection, and available for public viewing in the Museum’s library. It’s a whole new magical slice of Muppet history for doll-wigglers to enjoy.

To celebrate this new treasure, I’ll be posting a three-part synopsis of the show from Monday to Wednesday this week, followed by some technical and puppet notes on Thursday, and finish up with a review of the show on Friday.

Now button your lip, and come with me
To the magical land of Tinkerdee,
Where frogs serenade, and witches roam free…

Monday, Nov 5:
Gettin’ medieval on ya

Kermit the minstrel stands before a castle door, strumming his lute and singing:

Hark now to the minstrel’s song,
I’ll sing to you a while.
So gather round the TV set,
And do not touch that dial.
No, toucheth not that dial!

Kermit strums as an announcer proclaims: “Muppets Inc. invite you to watch the pilot production of its new series, Tales of the Tinkerdee!”

Enter King Goshposh: a bossy, grouchy king who chomps on a lit cigar. The King orders the minstrel to sing at his daughter’s birthday party tomorrow night, then storms off. Kermit is then visited by the lovely Princess Gwendolinda, the fair-haired beauty for whose love every knight in the kingdom would glady risk his head — or, if you ask me, a wide-eyed ditz with curly blond hair. Kermit assures the Princess that he’ll sing at her party, and she flounces off. Then Kermit tells us:

The invitations have been sent
To everyone poor or rich
The one person who didn’t receive one…
Was Taminella, the witch!

… And we see Taminella Grinderfall, the witchiest witch of them all, sitting in her dank cave, and grumbling that she hasn’t been invited to the party. The ragged old hag decides that her invitation must have been lost in the mail, so she calls in her ogre Charlie (who we see as a huge pair of filthy legs, played by the only human on-screen in the show). She tells Charlie to take a letter to the King. She must go to that birthday party — “It’s the biggest social event of the season! ALL the neighboring royalty come… and they bring presents! SCADS of jewel-encrusted goodies! That’s where we come in… Where we come in and heist the goodies, Charlie!” The ogre asks why they need an invitation. Tammy shrieks, “Where’s your sense of etiquette, Charlie? C’mon! Let’s start writing letters!”

Meanwhile, back at the castle, the King calls for his Prime Minister (a short, feeble-looking guy with glasses and a pointy hat). They’re getting ready for the birthday party. It isn’t going well. The cake, which was supposed to have 267 layers, was made with 267 candles instead. The frustrated King bellows for the minstrel, and demands to hear the Princess’ birthday song. Kermit gladly obliges:

It is the princess’ date of birth,
Let bells ring out the news!
We’ll celebrate with joy and mirth,
And a party, I suppoose!

“OUT! OUT!” screams the King — but then the Prime Minister returns, with a letter from Taminella. He reads it aloud: “Dear King. It has come to my attention that I have not been invited to your forthcoming party. This is an understandable oversight, since you are… a cloth-head… Love, Tammy.” The furious King refuses to invite the witch to the party — but then Kermit rushes in with a singing telegram from Taminella, demanding an invite. Then a blimp goes by, flashing the message: “INVITE TAMMY… OR ELSE!” The King is adamant — “She can’t scare me, and she can’t come to this birthday party neither!”

Cut to Tammy, still stewing in her cave. “I can’t understand it… I’ve written forty-two letters, three telegrams, and a blimp. D’you suppose they got my message? Maybe they haven’t opened their mail yet.” She brews a magic potion in her cauldron and conjures a vision of what’s happening in the castle — just in time to see the King order the Prime Minister to burn all of Taminella’s threatening letters. Absolutely furious, Taminella screams for Charlie to bring in her costume box. “This is WAR! We’re goin’ to that party, and we’re gonna GET THOSE PRESENTS!”

Tomorrow! The story continues,
as Taminella implements her ingenious Four-Part Plan
to kidnap the Princess and steal the presents,
by disguising herself as… Santa Claus?